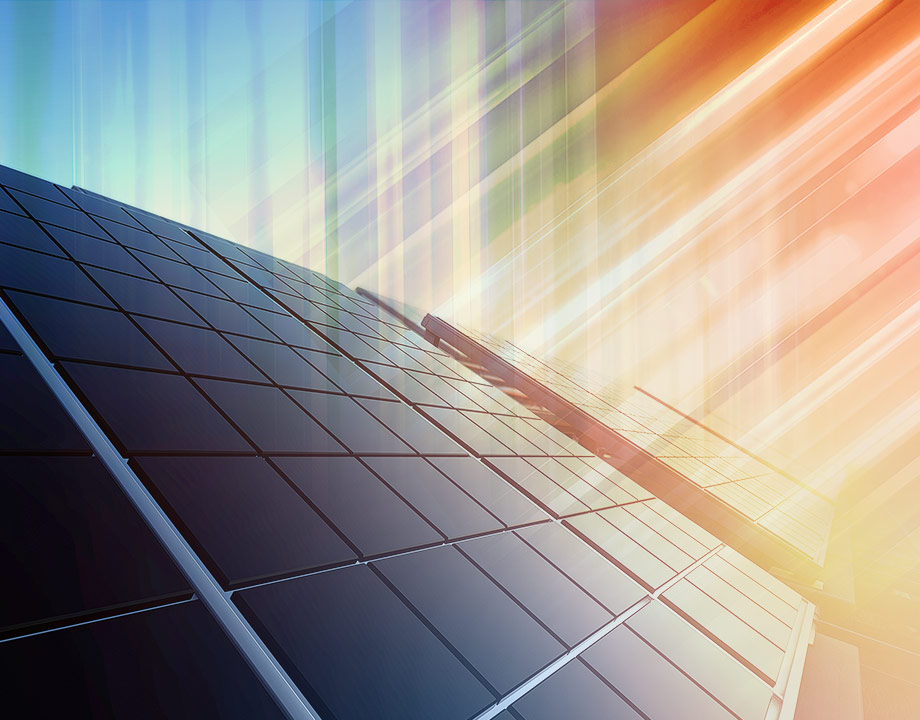 Building Equipment Contractors Electric Power Energy
The summer of 2019 had some of the hottest months on record, and that weather put a premium on keeping buildings cool. Today’s air conditioners, however, have a huge appetite for power that creates headaches for plans to move the electric grid to renewable sources.

In a breakthrough published earlier this year, researchers from Stanford University in Palo Alto, Calif., developed a device that combines solar power harvesting with a passive cooling system.

The combined system was able to reduce the temperature by 29 degrees Celsius, which is enough to turn a broiling hot day into a brisk morning—all without the use of refrigerants or electricity.

The key to this discovery is a temperature regulation process known as radiative cooling. In essence, a body can lower its temperature below that of its surroundings, if it is facing a much colder object to which it emits heat. Any object can reject energy this way if it is exposed to a clear night sky, since the temperature of space is roughly 3 K. 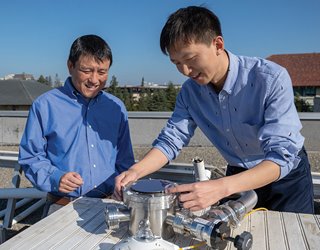 Shanhui Fan and postdoctoral scholar Wei Li with their apparatus that works like a double-layered solar panel. Photo: Stanford University
Most buildings, however, have their largest cooling demand during the day, when the sun is out. It was thought that radiative cooling would be unavailable in daytime, since the radiative influence of the sun dominated that of the deep space background.

Shanhui Fan, professor of electrical engineering at Stanford, and his team have found several ways to overcome this daytime interference.

Their innovations combine a highly tuned thermal emitter, designed to function as a radiative cooler, with some means of blocking the incoming daylight rays. 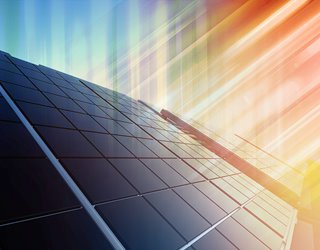 If this device was packaged as part of a commercial product, it could be mounted on office and retail building rooftops as a means to provide both solar power and cooling. Illustration: Radik Shvarts
In the earliest iterations, described in a 2014 paper published in Nature, a highly effective reflector was used, which reflected 97 percent of incoming light, while providing a window for outgoing emissions in mid-infrared frequencies around 10 μm. This device, when placed in a vacuum chamber to minimize thermal interactions, achieved an emitter temperature 40 degrees Celsius below ambient even in the face of 850 W per m2 of incoming irradiance.

Having demonstrated this, the team then asked if they could find a way to “use the sunlight, while doing radiative cooling,” Fan said. To do that, they would need to absorb incoming solar energy rather than simply reflect it away.

A thin wafer of germanium had the right properties: It is fairly opaque at visible wavelengths, absorbing most incoming sunlight, while being generally transparent at the mid-infrared.

Because most of the energy in the solar spectrum is in the visible and near-IR range, Fan said, germanium could capture solar energy for use in thermal or photovoltaic applications, while allowing mid-IR energy to escape for radiative cooling.

The Stanford team tested the concept with an experimental device that placed a germanium wafer in front of a mid-infrared emitter.

As reported in a recent paper in the journal Joule, the wafer absorbed enough sunlight to warm up by 24 degrees Celsius, while the emitter sent enough radiation through the infrared “window” to cool itself by 29 degrees Celsius below ambient temperature.

Recommended for You: 9 Innovations in Solar PV Technology

The Stanford device, variants of which are now being pursued commercially by a company called Sky Cool Systems, functions in a way that is exactly opposite of the greenhouse effect. Fan acknowledged that if enough of the Earth’s surface were covered with this type of device, it could potentially cool down the planet.

If this device was packaged as part of a commercial product, it could be mounted on office and retail building rooftops as a means to provide both solar power and cooling.

For now, however, the team is focusing on more immediately achievable and affordable goals. Fan said his team is now looking at using radiative cooling systems to cool down solar PV panels, thereby improving their efficiency.