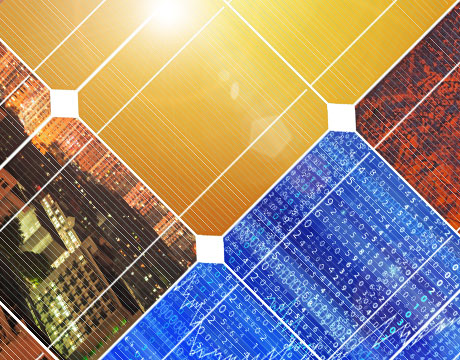 Driven by a broad interest in sustainability, William Chueh’s lab at Stanford University has been trying to develop ways to make solar the best choice for providing affordable energy anywhere in the world and at any time.

“We want to make solar [available] when and where it’s needed,” says the assistant professor of materials science and engineering. The team recently overcame challenges and defied conventional wisdom with a breakthrough that could lead to large-scale storage capabilities for solar power. Chueh and Nicholas Melosh, associate professor in the same department as Chueh, are co-leaders of the project that also includes one post-doctoral student and three doctoral students.

“Sunlight is a thousand times more abundant than what we need for society for energy,” says Chueh. “But when you harvest it with techniques like solar panels, there is no storage component.” In addition to limiting efficient use to places where sunshine is plentiful, silicon solar panels use a relatively small portion of the spectrum, Chueh says. They are known to be good at converting visible and ultraviolet light into electricity but not infrared light, which is wasted.

But the team thought that perhaps additional energy could be harvested by also using heat, especially since they knew that heat makes electrons move faster. So the team set out to drive a photoelectrochemical process by combining both light and heat.

The team foundthat ordinary metal oxides, such as rust, can be fashioned into solar cells capable of splitting water into hydrogen and oxygen. As the metal oxide solar cells grow hotter, they convert photons into electrons more efficiently. The exact opposite is true with silicon solar cells, which lose efficiency as they heat up.

Re-combining the hydrogen and oxygen when needed, even in the dark, reclaims the energy to send power to an electrical network.

The work shows that not only is there the advantage of light producing voltage but also heat making the electrons move faster, Chueh says. “These combined give you a highly efficient design, significantly more efficient at storing the power of the sun.”

Chueh says his team was not surprised at the outcome because of previous work. “But it was extremely surprising to many in the community because it had always been assumed that heat was just not good for you,” he says. “Before, we always used to keep the solar cells cool.”

The team tested three metal oxides: bismuth vanadium oxide, titanium oxide, and iron oxide (rust), and all showed increased production of hydrogen and oxygen at higher temperatures. They plan to continue testing other metal oxides for efficiency as well as mixing different metal oxides together.

However, there are still challenges and commercialization is more than a few years away. “Being a relatively new topic in the field, there is not a lot of literature to work off of,” Chueh says. “So we’re pioneering the field in terms of integrating heat and light. We have to re-learn things and re-do things, for example, measuring the performance of solar cell as a function of temperature. We need to re-do all this, and it’s time-consuming.”

One of the next steps for the team is making a full-sized device. The current one is small scale and works only with water. “We have to heat up the water. The challenge is that water boils at 100 degrees. So we are trying to make a device that works not only with liquid water but also vapor water [steam],” Chueh explains.

Even though results may be a decade away, Chueh says it’s very rewarding, not just because it’s satisfying to see the work progressing but also because it’s something that is not purely academic.

Because of the broader goals of The Chueh Group, such as exploring efficient electrochemical routes for converting solar energy to chemical fuels and subsequently to electricity, the team is already thinking about other potential uses for the process, such as using pure hydrogen gas produced by water-splitting to power vehicles or other machines directly and without pollution. "We can store these gases, we can transport them through pipelines, and when we burn them we don't release any extra carbon," says Chueh. "It's a carbon-neutral energy cycle."

For Further Discussion
We want to make solar [available] when and where it’s needed.Prof. William Chueh, Stanford University