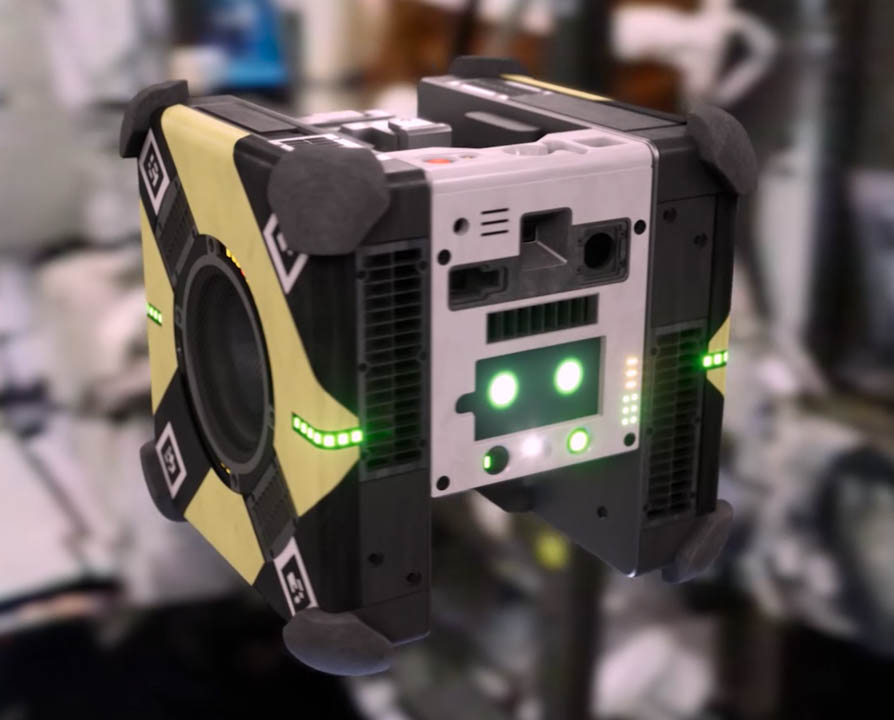 The Astrobees are NASA’s new flying robotic drone system. The trio of Bumble, Honey, and Queen will help the astronauts in their everyday tasks onboard the ISS. Photo: NASA

For the astronauts living on the International Space Station (ISS), it never hurts to have an extra set of hands. The Astrobees, an autonomous flying robotic drone system, was recently launched on the ISS this year to provide support for research projects, environmental monitoring, and maintenance.

The Astrobees are a trio of free-flying robots that will help reduce the time spent on everyday tasks. The robots Bumble, Honey, and Queen have been living on the ISS for the past few months. Bumble and Honey were launched to the space station back in April, and Queen arrived at the end of July. 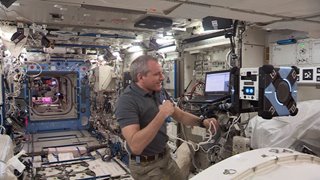 Astronaut David Saint-Jacques of the Canadian Space Agency watches over while flight controllers at NASA's Ames Research Center command Bumble. Photo: NASA
Each robot measures about one cubic foot and is equipped with six cameras, a touchscreen interface, a speaker, microphone, signal lights, and a laser pointer. The Astrobees flight system operates via two centrifugal impellers that drive air through 12 adjustable nozzles that work in unison. This lets the robot move instantly in any direction and capable of turning on any axis. The overall maximum thrust for the Astrobees is 0.3 Newtons.

“The largest challenge was the propulsion system design. It's a new design, and the key design features were being able to have an efficient and controllable system that was quiet,” said Early Daley, the project’s lead mechanical engineer.

“The impeller we have is the largest we can fit within that volume, and we can spin it a relatively low rate. The impeller is a centrifugal fan, rather than an axial fan, so it has a much lower RPM to reach the same amount of pressure we can use for thrust. That was key for the design,” said Daley.

To accelerate the project, the engineers at NASA used 3D printing techniques in the Astrobees’ design and manufacturing. During the testing of the propulsion system, the team 3D printed components in a variety of shapes and design iterations to reach their final design. The process resulted in several 3D printed parts being integrated into the final build.

“The final product itself has a fair number of 3D printed parts. Thirty-two percent of the dry weight, without batteries, are 3D printed parts,” said Daley. “It definitely supported the development of the Astrobees and was invaluable in their design. Some of the parts would have been very difficult to manufacture any other way.”

When it comes to navigating the ISS, the robots either operate autonomously or via remote control. Once a flight path or destination has been programmed into the Astrobees, it can steer itself to the spot and adjust its course to avoid obstructions along the way.

The Astrobees are currently undergoing a conditioning phase so they can learn their environment. In June of this year, the first Astrobee, Bumble, was able to fly under its power. To reach that point, the astronauts needed to calibrate its navigation system by having it learn its environment.  Canadian Space Agency astronaut David Saint-Jacques completed the pre-flight tests by manually moving Bumble around the Kibo laboratory. Bumble then used its onboard cameras to identify targets in the ISS so it could learn the environment, identify specific targets, and dynamically adapt to changes in its environment.

While the Astrobees are flying around on the ISS, safety is a significant concern. The Astrobees' design needed to be safe enough that it would not cause damage to the ISS structure or other pieces of equipment.

“We were really concerned what would happen even in a worst-case scenario where they could cause damage by let’s say impacting a window on the ISS,” said Daley. “There was a fair amount of study on the design of the impact system, which led to having bumpers on every corner and the robots being capable of absorbing the highest impact force possible based on max thrust.”

In recent months, the ISS has declared itself open for business. NASA hopes the Astrobees can be a commercial attraction for visiting scientists. The Astrobees function as zero gravity research unit for guest scientists. To help the astronauts and scientists in their everyday tasks, the primary tool of the Astrobees is its mounted robotic arm. Once it has traveled to a specific spot, the arm locks onto either a handrail or a sturdy object for orientation and to secure its position. It can then turn off its fans to conserve energy.

They can also use the robotic arm to deliver a payload. The Astrobees can work independently or together in a tractor-trailer configuration to transport larger objects throughout the ISS. Since they operate in no gravity conditions, the Astrobees are not limited by lifting power.

The astronauts, flight controllers, or researchers from Earth can also manually pilot the robots. For example, the remote piloting gives ground control researchers additional monitoring resources to measure radiation levels or the air quality of the ISS.

You May Also Like: Video: To the Moon, Mars, & Beyond

The Astrobees are vital to the agency's mission of returning to the Moon and future missions to Mars. They and other future robots will serve as the main tools and caretakers of future spacecraft, equipment, and environmental systems to ensure the crew is working in a safe and optimal environment.