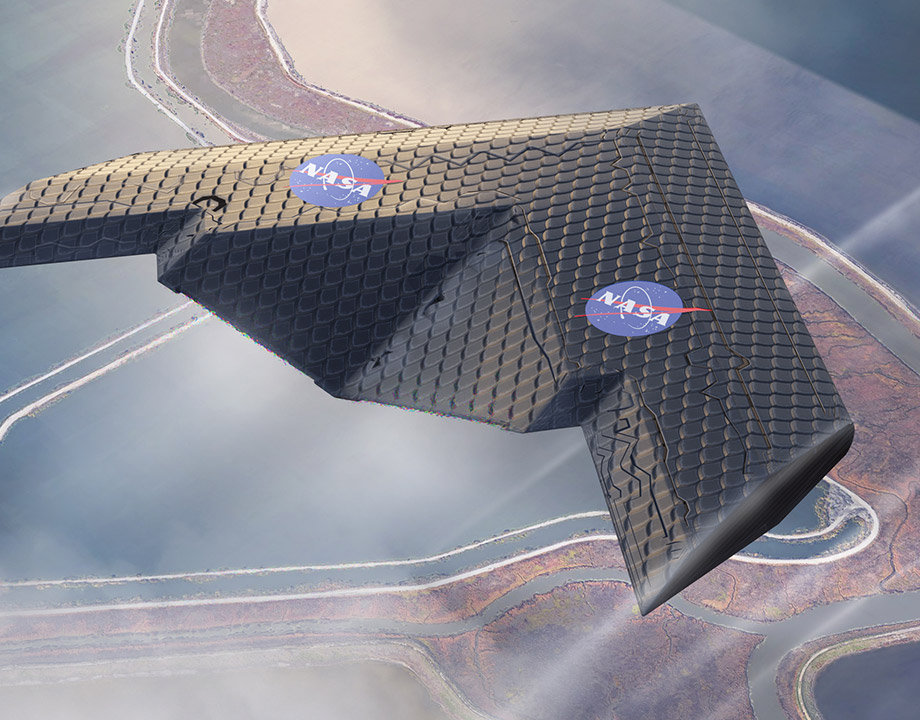 New way of fabricating aircraft wings with 3D printed lattice structures could enable radical new designs, such as this concept, which could be more efficient for different phases of flight. 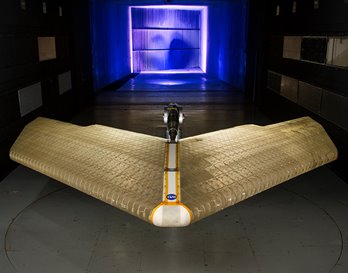 The research team tested the lattice structure wing at Langley Research Center to determine the efficiency gained from its design.
A team of engineers from NASA and MIT has built a new airplane wing that passively alters its shape to respond to changing aerodynamic loads. The flexible mechanical system, assembled from hundreds of identical molded octahedral unit cells, improves performance during such high angle of attack maneuvers as takeoffs and landings.

Traditionally, airplane wing design has always been a compromise. This is because each phase of flight—takeoff, landing, cruising, and maneuvering—has an ideal configuration of wing curvatures and aileron flaps. Designing one wing that operates well in all these phases involves tradeoffs in wing shapes that sacrifice fuel efficiency and increase operating costs.

There have been previous attempts at passive wing designs. An example is tow steering, which alters the surface of the wing. This involves building composite wings by placing fiber paths into a curvilinear orientation within the plane of the composite ply. The ability to steer fibers in any direction creates more efficient load paths and weight savings, and enabled engineers to tailor the wing’s stiffness.

Recommended for You: VR and Drone Technology in a Paper Airplane

Nick Cramer, research engineer for NASA’s Ames Research Center in California, said that the NASA-MIT team took a very different approach: “We are tuning the substructure of the wing rather than the surface of the wing.”

Instead of thick composite framework and skins, their design consists of octahedral unit cells that contain both stiff and flexible components. They bolt together to form an open but stiff cubooctahedral (eight triangular faces and six square faces) lattice framework covered with a thin homogenous polymer skin. The wing’s interior is largely empty space and designed to twist in predetermined ways under load.

“The main difference is the skin of our wing is homogenous,” Cramer said. “As the wing experiences higher attack angles, [the internal lattice structure] starts to twist down (or washes out) to maintain control authority. When it enters low angles of attack like your cruise conditions it twists back to a more efficient shape for a natural cruise. This is an important condition for takeoff.”

Washing out, or wing twisting, is especially important for blended body wings, where there is no clear dividing line between the wings and the main body.

“A vehicle like the X-48 has a high differentiation of the thickness between the center body section and the tip,” Cramer said. “This causes the tips to experience significant washing out and impacts performance. Washing out of the tips is necessary to maintain control authority and to avoid stalling out early during takeoff.”

“Since we are using the wing’s ability to twist as our primary mechanism for inducing roll, you end up producing proverse yaw—yawing in the same direction as the turn—reducing the need for a vertical tail. Our current design shows you don’t need flaps for roll authority. For pitch moment control, the overall aircraft would still need some sort of horizontal tail” Cramer said.

The main problem with lattice structures is scalability. The team injection molded cells from polyetherimide (PEI) reinforced with 20% short chopped glass fibers and unreinforced PEI Ultem 2200. They can produce an octahedral building block every 17 seconds for $0.03 or less per cubic centimeter.

The team’s volumetric throughput was about 5,000 cm3/hr. The researchers believe that the production of discrete lattice material systems will benefit greatly from robotic automation assembly.

“We built multiple robots during the project for the first stage assembly. These were simple relative robots that were able to climb through the lattice structure. Unlike the sophisticated robots found in larger plants, these simple robots have just one specific task to join the unit cells into the lattice structure” Cramer said. The robotic assembly already demonstrated a rate of 40 seconds per building block, nearly 40,000 cm3/hr, eight times faster than the team’s output.

“We started with a fundamental toolbox of components, and as we imagined the design, it was like working with virtual Legos,” Cramer said. “By limiting our design space, we changed our workflow and created a new design that was built upon a repetitive building block to achieve a unique and promising design.”

You May Also Like: NASA’s Mars Ice Challenge Heats Up