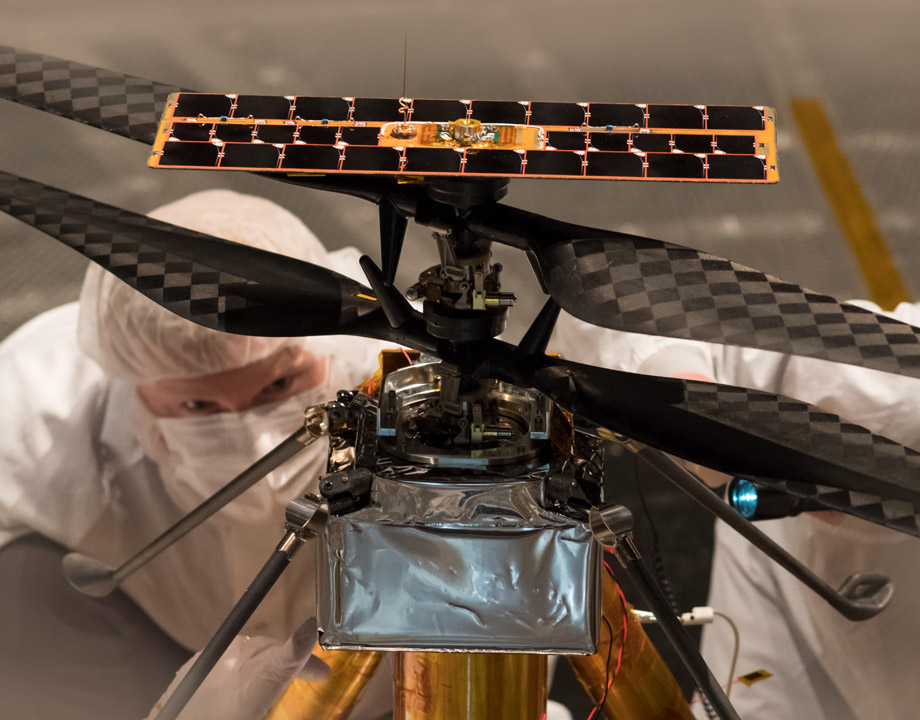 Such mobility would open vast horizons to scientists trying to understand the potential of Mars to support life. Starting with Pathfinder in 1997, the United States has landed four robotic rovers on Mars. Yet the most successful of them, Curiosity, traversed only 13 miles since landing in 2011.

Greater exploration will require more mobility. The small helicopter developed by the NASA Jet Propulsion Laboratory promises to do just that. The 2.1-kg helicopter consists of a fuselage with power and control systems, dual counter-rotating rotors, solar cells for recharging the battery, and landing gear. 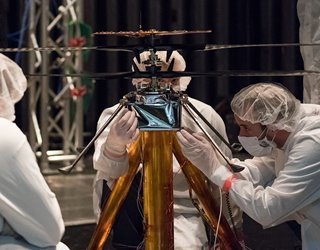 Members of the JPL Mars Helicopter team mount the unit to a test system that will simulate the red planet’s low gravity and thin atmosphere. Photo: Jet Propulsion Laboratory
The concept dates back to the late 1990s, when models showed that a fast-spinning ultralight helicopter could fly on Mars. It has taken 20 years to develop small and powerful enough batteries, computers, flight control systems, and solar cells that make this possible, said MiMi Aung. She is the helicopter’s project manager at JPL’s Solar System Exploration Directorate.

Still, it is a lot to fit into one package.

“When we began the project, I told everyone that they had to be good at their discipline—but they also had to be a systems engineer,” Aung said. “Everything you do individually touches everything else, especially when we’re making something so small and so light. So you can’t just design the best control system or rotor for you. It has to balance mass, volume, power, and energy for the mission.”

That led to many unique designs, starting with the rotor. In order to achieve lift in the thin Martian atmosphere, the rotors needed to be large (1.2 meters) and rotate rapidly (40-45 revolutions per second). Yet the designers could not afford the mass and volume of a tail rotor to cancel the torque of the main blades. So they opted for a pair of counter-rotating rotors whose torques cancelled out one another.

JPL worked with NASA Langley Research Center and AeroVironment to build a custom motor that could achieve those speeds. Using advanced algorithms developed at JPL, AeroVironment built a 23-pole-pair brushless d.c. motor. It included square wires to squeeze out every possible gain in efficiency. The first prototype took 100 hours to hand wind.

The fuselage consisted of a central battery surrounded by five circuit boards, which formed a cube that opens on top to connect with the drive. Aung’s team modeled everything, even the insulating air gap between the circuit boards and the fuselage skin, then wrapped the skin with a DuPont Kapton polyimide film spray-coated with four different metals to modulate the amount of heat that entered and escaped.

The heart of the fuselage also contained temperature sensors and a resistance strip for heating.
“The rotors, solar cells, and landing gear were designed to survive the Martian night without heating,” Aung said. “We needed to keep the fuselage’s battery, computer, and sensors warm enough to function.”

The system also needed a sophisticated degree of autonomy. On one hand, it needed to translate general commands from flight controllers on Earth—photograph these spots, sleep and recharge at this point, wake up at this time—into operational commands.

Yet it needed to navigate flying conditions on Mars. Because the atmosphere is so thin, it provides less of a blanket. As a result, the helicopter must respond faster than any human could to changing air dynamics.

Testing a prototype also posed a challenge. “We had to invent how to test a flying helicopter in thin air,” Aung said.

To do that, they filled a large, hermetically sealed room with carbon dioxide (95 percent of Mars’ atmosphere), then dropped the pressure to Mars levels. Working with Caltech, they built a bank of fans that, despite the low pressure, simulated winds in a thin atmosphere. Then they attached a robotic arm to the helicopter, giving it additional lift to emulate Mars’ low gravity.

After instrumenting the helicopter, they flew it through a series of maneuvers, some in simulated wind storms, to see if its flight behavior matched their model’s predictions. It did well enough to earn a place on the upcoming Mars 2020 mission.

Recommended for You: Iron Man Lives

On Mars, its primary mission is to prove it can fly, take photos, recharge, and follow commands autonomously. Aung estimates that the helicopter is capable of flying nearly 1 kilometer at 9-10 meters/second for 90 seconds before recharging.

For Mars 2020, however, NASA will throttle it back. It will move 2-3 meters per second for 300 meters while flying no higher than 5 meters.

That will change in the future. She envisions helicopter scouting ahead for rovers and eventually humans. But helicopters are unlikely to every carry humans on Mars.

“The dynamics get sloppy because you need much larger rotors, and the blades get sloppy—there’s a resonance problem—when you get that big, she said. “But we think a future helicopter with a 3-to-3.5-meter rotor could carry a 10-to-15-kilogram payload at up to 20 meters per second and fly five to eight minutes before it has to recharge. That’s a large enough payload to do significant science.”