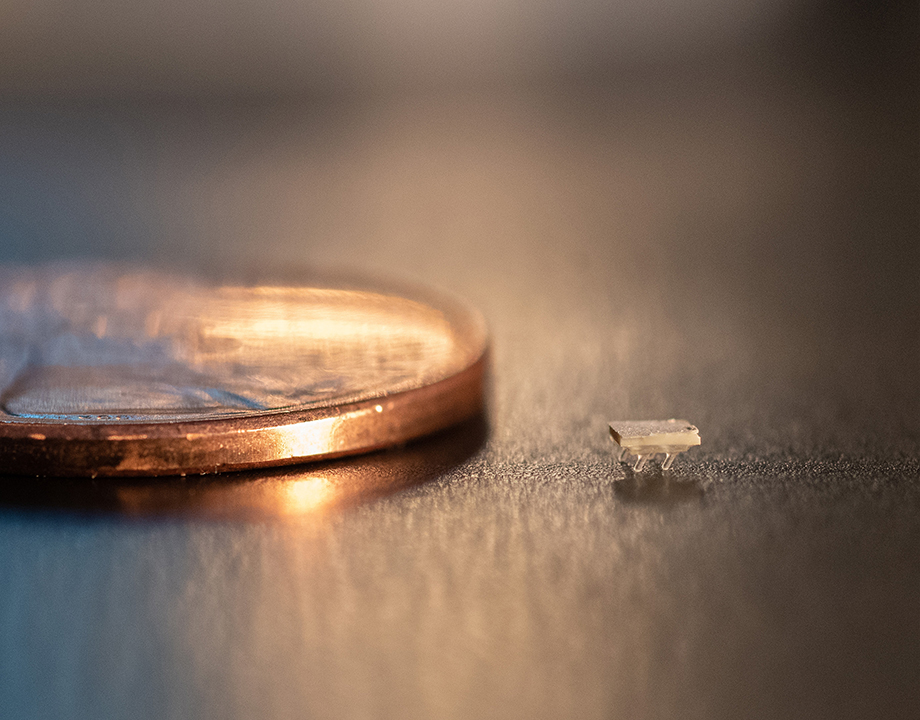 “Consider the ant: One of them cannot carry a load. But if they cooperate, they can perform tasks a single one can’t,” said Azadeh Ansari, a professor at the School of Electrical and Computer Engineering at Georgia Institute of Technology. “Because they have this cooperation, interesting things can happen.”

She and fellow researchers at Georgia Tech have considered the ant when creating a tiny 3D-printed robot that moves by harnessing vibration from piezoelectric actuators, ultrasound sources, or tiny speakers.

Swarms of what she calls “micro-bristle-bots” might work together to move materials, sense environmental changes, or explore outer space and the inner human body. 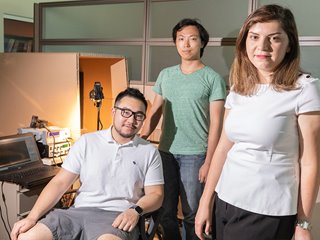 Researchers Azadeh Ansari (right), DeaGyu Kim (center) and Zhijian (Chris) Hao test a micro-bristle-bot in a chamber designed to contain the sound of the piezoelectric actuator. Photo: Allison Carter, Georgia Tech
They’re currently around two millimeters long—about the size of the world’s smallest ant, though they can cover four times their own length in a single second. The researchers have plans for the robots to work together in swarms, Ansari said.

The prototype robots respond to different vibration frequencies, depending on their configurations, allowing researchers to control individual bots by adjusting the vibration, she added.

“Currently, we’re able to control them well by applying different actuation frequencies,” Ansari said. “But we want to make them smaller and smaller and then look at their collective behavior. If you have hundreds, could they do what just one robot couldn’t do? What are the tasks they can perform as a group that they couldn’t do alone?”

The micro-bristles-bots are so named because of their springy legs that move up and down in accordance with the vibrations that move them forward. The legs look like bristles, Ansari said. 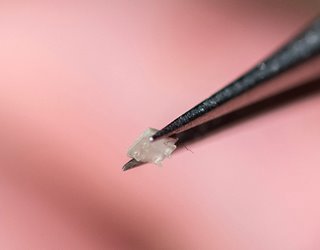 A micro-bristle-bot—about two millimeters in length—is the size of the world’s smallest ant. Photo: Allison Carter, Georgia Tech
The tiny bots are comprised of a piezoelectric actuator glued onto a polymer body. The body is 3D-printed using two-photon polymerization lithography (TPP) process. The technique polymerizes a monomer resin material. When the portion of the resin block struck by the ultraviolet light has been chemically developed, the remaining resin can be washed away, leaving the desired robotic structure.

That process is time-consuming so the researchers are looking at ways of scaling it up, with plans to make hundreds or thousands of micro-bots at a time.

The actuator glued to the body generates the vibration that gets the bot moving. It’s powered externally, as there is no battery small enough to fit onto the bot, Ansari said.

Or, the vibrations can come from a piezoelectric shaker beneath the surface the robots move across, from an ultrasound/sonar source, or from a tiny acoustic speaker, she added. “The legs of the micro-robot are designed with specific angles that allow them to bend and move in one direction in resonant response to the vibration.”

Ansari and her team have built a “playground” in which multiple micro-bots can move around as the researchers learn more about what they can do. They are also interested in developing micro-bots that can jump and swim.

The swarm is key to allowing the micro-bots accessibility to harsh or tight areas where digital robots can’t maneuver, Ansari said.

She suggested two very different examples of areas for exploration: the human body and outer space.

“The idea is if you miniaturize them enough—it could be in the hundreds of microns range, it doesn’t even have to be in nanometers—the bots could enter the body,” Ansari said.

She envisions outfitting them with sensors and computation units for monitoring specific human conditions or for performing simple tasks inside the bloodstream.

Because the robots are so small as to be minimally invasive, they could explore certain areas of Mars in search for water or biological molecules. Essentially, they could be on the hunt for extraterrestrial life, Ansari added.

“They could go where, normally, humans and bigger robots can’t go,” she said.

Ansari comes to the research from a background in MEMs, microfabrication, and sensors rather that robotics. But building such small instruments definitely calls for interdisciplinary cooperation, she said.

“Surprisingly, there’s not much work done in this area, whereas traditional robotics and nanotechnology have their own disciplines,” Ansari said. “But together, I know they can be used to build a new class of robots.”