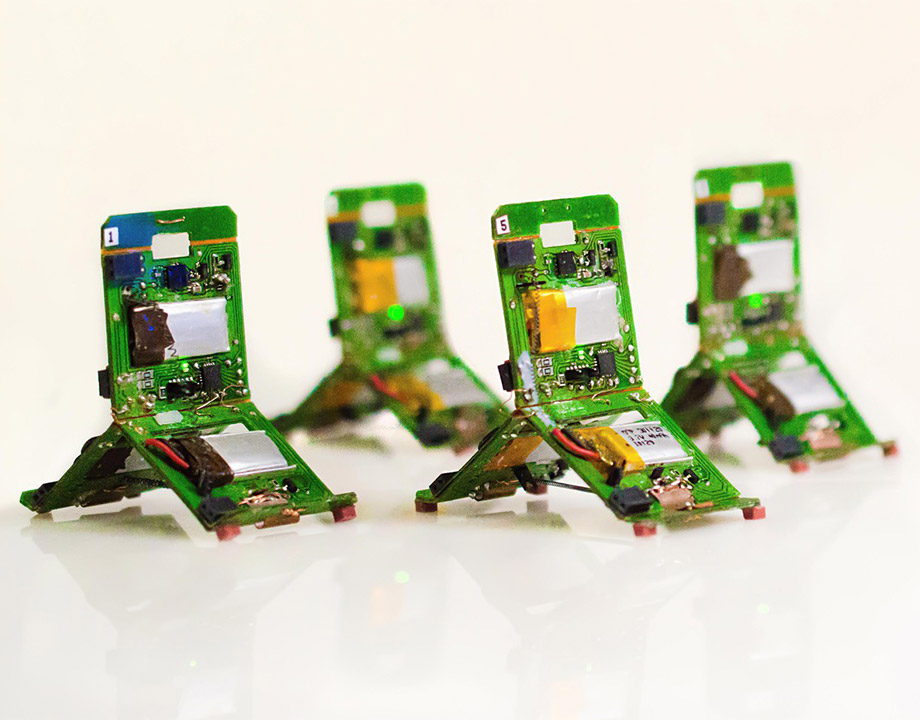 Autonomous origami robots can be assembled in only a few minutes. Photo: Zhenishbek Zhakypov, EPFL

With about a million billion individuals to our seven-and-half billion, the ant is arguably the planet’s dominant species. It’s not their intelligence—or incredible strength—that lead to such massive multiples, but their disposability. Each ant does its task with robotic determination, and if one should perish while executing its duties, another will step in its place.

Robots already possess robotic determination but it would also be helpful to humans if they were disposable at the individual level, just like ants. Now engineers at the École Polytechnique Fédérale de Lausanne (EPFL) in Switzerland have created a tiny robot that can join forces with its clones to complete tasks. Called “Tribot,” it’s cheap enough to produce—losing one is no big deal. 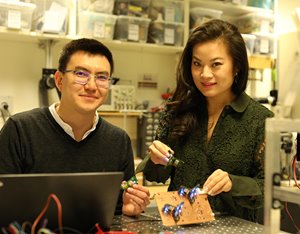 Robotics researchers Zhenishbek Zhakypov (left) and Jamie Paik (right) demonstrating Tribots and a fueling station. Photo: Marc Delachaux, EPFL
“We were trying to show that it is it possible to make simple robotic units that can collaborate and do more functional things that have not been done before,” said Jamie Paik, a mechanical engineering professor at EPFL and the director of the Reconfigurable Robotics Lab. “But if one were to disappear in the rubble, we won’t be sending out a search a crew for the robot. They are not going to cost millions of dollars, they are going to cost a couple of dollars.”

To keep those costs down, Paik and her colleagues borrowed from origami and took advantage of the reusability it offers. The Tribot is manufactured in thin flat layers and folds up into a three-legged—or three-paneled—thing. These legs-panels give the robot three modes of moving: crawling, rolling, and hopping.

“Individually, the locomotion types are not that impressive compared to other robots,” Paik said. “What is impressive is that it’s such a small size, such a small volume.”

To make it so small, the Tribot uses the same actuators, sensors, and structures to perform its three movements. In the future, additional actuators could be added to allow it fly, dig holes, or crawl underground, without greatly increasing its size and weight.

Untethered by any cable, the robots use three onboard lithium ion batteries to power their actions. This freedom of movement is crucial and Paik hopes to add power management to the robot’s list of versatile traits. The more a user wants to do with the robots, the more energy will be required.

“Why not have them use additional battery power from other robots?” Paik said. Robots could connect to other robots—with induction coils or by physically interconnecting—to share juice.

Further Reading: An Army of Tiny Robots to the Rescue

The robots can also be made to do less, if needed. “If you want to make them dumber, this is also an option,” Paik said. They can be simplified—removing the ability to hop, crawl or roll—to make production cheaper or to use resources for other tasks, as the situation demands. “It really depends on the application.”

The potential applications are many, from search and rescue missions to environmental monitoring, from household helpers to precious metal hunters. Before they can do any of that, though, Paik and her team need to get the cost down.

“Currently, individuals cost ten dollars,” she said. But when the Tribot’s batteries and sheet metal are bought in bulk—and when they are produced on a mass scale—the price will drop dramatically.

“The most expensive part now is the labor cost of doctoral students,” Paik said.