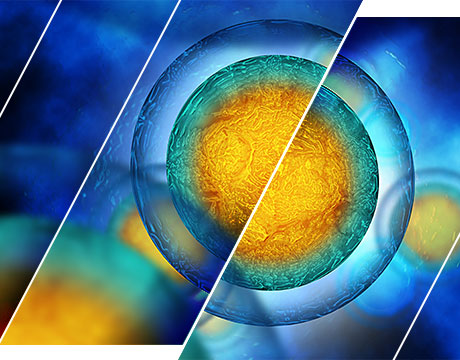 Cell research is a key driver of medical breakthroughs but one ever-present challenge has been finding a way into the cell and transporting it. One group at UCLA has been out to solve this problem by thinking small—nanoblade small. By literally cutting and slicing the cell, their work has taken precision to a level few considered possible.

“When we started talking about this 10 years ago, some people just weren’t positive about its chance of success,” says Eric Chiou, professor of mechanical engineering and aerospace at UCLA. “The idea of getting inside a cell and getting it out of there? How do you do that without destroying the cell? If you open it, then it can ‘reheal.’ But if you open the hole too big then that can kill the cell. But we stuck to it and believed in the work.”

Their strategy was to have a "nanoblade" actually open up the cell through the outer membrane by using a laser. “Fundamentally, you have a light to trigger a high-temperature piece near the cell membrane,” says Chiou, who has a Ph.D. in electrical engineering from UCLA and in computer science from the University of California, Berkeley. “And heat being there for a short time is how we started. The thought was to use some kind of metal to harvest laser pores to trigger a heating event.” It involved opening up the cell but not going inside it where it could possibly do damage.

The first version of the nanoblade was constructed out of a glass pipette and the surface was a very thin layer of titanium, he says. “The nanoblade cut and then there was the creation of an instant local explosion which sliced open a cell membrane. I think you could say that’s just a little different from conventional cutting with a knife,” he laughs.

Once the cell was cut open, pressure was applied to the glass pipette and the liquid was then squeezed out of the cell. With the membrane open, the material will then flow into the cell. “And that’s when you’re talking about the membrane actually coming back and ‘rehealing’ itself,” he adds.

The second version worked with 200 cells over an hour, he estimates.

As for applications, the nanoblade has been utilized in work on mitochondria, a vital organelle in the body. “Mitochondria delivery can lead to potentially understanding diseases but I believe there can be many helpful medical possibilities because of this tool,” he says, adding that the team is presently working on a more complicated system that may be able to work on 100,000 cells per minute.

He relishes the fact that they’ve been able to prove themselves to doubters and looks forward to improvements. “It’s exciting to think about, considering how many difficulties are involved in medical research to begin with,” he says. “If this can play any role in research that can save lives then that would be an incredible feeling.”

For Further Discussion
If this can play any role in research that can save lives then that would be an incredible feeling. Prof. Eric Chiou, UCLA