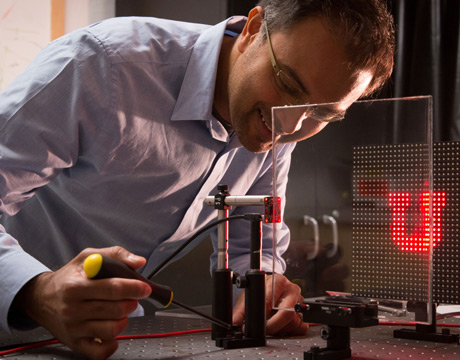 Engineers Rajesh Menon (pictured) and his team have discovered a way to create an optics-less camera in which a regular pane of glass can become the lens. Image: University of Utah

“If you look at camera, all the lens does is rearrange light so it makes sense to a human being,” says Rajesh Menon, a professor of computer engineering at the University of Utah. “This information is already entering the aperture. What if we remove the lens?”

Without the lens, any aperture can be a camera, as long as there is a good algorithm to interpret the data. Menon has created such an algorithm. With a window, a sensor, and the algorithm, he has built an optics free camera. The technology may turn our windshields into cameras for tomorrow’s automated cars.

The lensless camera springs from work Menon did several years ago converting a surgical needle to a microscope for looking into mice brains.

“Of course, it’s not a microscope, it’s a light pipe,” Menon said. “The information coming out is all jumbled up.”

To solve the problem, Menon and his colleagues created algorithms that unjumble the information and reconstruct the images.

Menon used a similar method to create his lens-free camera. He covered the outside edges of a plate of glass with reflective tape – except for one small spot. There he placed a cheap off-the-shelf camera sensor, the same kind used with smart phone cameras, pointing across the rest of the glass. The research paper appeared in the September 3 issue of Optic Express.

The light that reaches the edge of the pane would seem randomly scattered to us and appear as nothing but a blur. The right technology, however, can identify a recognizable image from those blurs. Menon’s algorithm, trained by comparing resolved images against the blur that reaches the sensor, learned how to identify the blurred image. To prove it, Menon set up an LED light board on one side of the plate of glass. When it displayed the “U” logo of the University of Utah, the lensless camera was able to recognize it—and reconstruct it. It also unscrambled a moving image of a stick figure.

For the applications Menon has in mind, the image wouldn’t need to be reconstructed at all, only “understood.” “The autonomous cars of the future need to make quick decisions,” Menon said. “There’s no need to have a human in the loop.”

The images currently being reconstituted by the algorithm include some distortions or artifacts. Menon isn’t sure if they are caused by the glass, the sensor, or the algorithm. But he is sure he could increase the signal to noise ratio by installing multiple sensors around the pane’s edge, rather than just one.

“I don’t know if we’ll get to a point where you’ll get the beautiful images you get with an iPhone, but I think we can get pretty close,” he said.

As it happens, the window itself is not strictly necessary. When Menon tried the experiment with the sensor and open air, the images were degraded but apparent.

A lensless camera is suited for many applications. Every window of a car could sense its surroundings, while the windows of a house could become security cameras. The technology also has the potential to improve augmented reality glasses.

But there’s work to be done before then. Recognizing a simple bright image created by a few LCDs is one thing, reconstructing the complex world outside our windows is another. Menon is confident we’ll get there. He has already made the first step in showing that the lens may soon be archaic in situations where a human needn’t see an image.

“The most fundamental thing to me is that automatic cars are using technology designed for human brains—technology that has been around for a hundred years,” he said. “Why not think about imaging from a non-anthropomorphic perspective. It gives you new design freedom.”

For Further Discussion
The autonomous cars of the future need to make quick decisions. There’s no need to have a human in the loop.Rajesh Menon, University of Utah