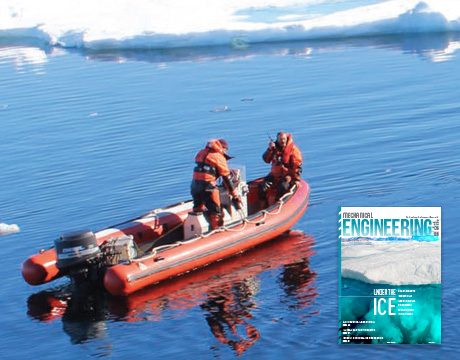 Nereid Under Ice is a newly built sea robot was designed specifically for exploring the underside of Arctic sea ice.

Chris Judge has been playing videogames since he was three, so it is not unusual to find him staring at a screen with an X-Box controller in his hand. And thanks to the hours he spent beating Tecmo Super Bowl and Super Mario Bros. He has developed a suite of related skills, from hand-eye coordination to the visuospatial ability to keep track of an avatar’s location in a three-dimensional maze.

In the summer of 2014 Judge, an engineering assistant with the Woods Hole Oceanographic Institution in Massachusetts, was holding a videogame controller aboard the German icebreaker RV Polarstern in the Arctic Ocean. The joint American-German research team he was part of selected him, because of his gaming prowess, to pilot a newly built sea robot on a unique mission. Nereid Under Ice was designed specifically for exploring the underside of Arctic sea ice, an area so far off-limits to scientists.

As the two ton, bright orange vehicle lowered into the water, two other important components followed: a tow body and a depressor, which would quickly drag Nereid down. Once Nereid was under the keel of the ship, safe from dangerous ice floes or currents beating against the hull, the depressor and tow body were to decouple. The tow body would trail behind the robot as it swam away, unspooling as much as 20 km worth of hair-thin fiberoptic Gigabit Ethernet cable through which the robot would transmit video and other data. The depressor would remain under the ship, passing data to Polarstern’s computers via a thick, heavy duty cable, impervious to nature’s forces.

Through a webcam, Judge saw Nereid reach the water, and waited for the depressor and tow body to unlink, but the release command failed.

That sort of error had never happened during Nereid’s rigorous testing, but the team was prepared to deal with failures at sea. Clad in the puffed-up suit dubbed “the Gumby” to guard against the -20 °C cold or an accidental fall into the water, engineer John Bailey was already heading to the rescue in a small boat, toolbox in hand. The latch linking the tow body and the depressor failed to unlock so Bailey had to pry it open by hand. (The team later discovered that two latch parts with different coefficients of thermal expansion had jammed together in the cold.)

In spite of the sub-zero temperatures, Bailey tossed off his gloves, which were too thick to gently strike the screwdriver’s butt with the hammer.

“I called it ‘forcing with finesse,’” Bailey said. “It moved a small bit every time, but it seemed like forever.”

After 20 minutes the latch relented, and Nereid whirred away free, to explore secrets under the ice.

Climate change may be global, but it is affecting the Arctic region more intensely than anywhere else on Earth. Researchers want to study the changes occurring in the Arctic ice pack and the ecosystems beneath it to learn more about what’s happening there now—and to improve predictions of what may happen there over the next few decades.

“The idea of going under the ice was long on the wish list,” said Antje Boetius, a professor at the Alfred Wegener Institute for Polar and Marine Research in Bremerhaven, Germany, who led the efforts on Polarstern.

Getting a good look at life under the ice was very hard to accomplish. Scientists have to approach the region via icebreakers, which disturb the habitat. To get a true picture, they had to get away from the ship.

That meant robots, particularly advanced ones able to travel long distances while still transmitting back images and sounds. Standard ocean robots come in two types, neither of which are well-suited to the task. Remotely operated vehicles (ROVs) rely on human control to accomplish their missions and so need a constant connection to their operators via cables. The lengths and weights of those cables limit the ROV’s mobility, and in Arctic conditions, those cables can be broken easily by drifting ice floes, leaving the million-dollar equipment lost at sea.

The other type of robot, autonomous underwater vehicles (AUVs), have more intelligence than ROVs, but usually only enough for a few pre-programmed tasks like taking samples and photos, but not for weaving through protruding ice parts and hovering under icecaps.

In order for Nereid to successfully move and work under ice and glaciers, the team designed it as an ROV-AUV hybrid, able to switch between the two modes as necessary.

Maneuvering and landing on the ice ceiling (like touching down on the seafloor, only upside down), would require human navigation. As Nereid sent real-time visual data to the computer screen through the lightweight fiber tether, the team would direct it to look into cracks and crevasses, photograph algae pools, or slowly ascend onto its landing skids to take water samples underneath ice. The thin fiber cable could still be its Achilles’ heel, but if it got snagged and broken, Nereid was programmed to turn on its AUV mode and return to the ship.

That’s no simple task. Unlike the so-called blue-water vehicles that operate in the open ocean, Nereid couldn’t just head straight to the surface.

“Under ice it’s not a great plan,” said Michael Jakuba, who led Nereid’s design team. “You would need to break the ice, which is difficult and may hurt the robot.”

To find its way back, Nereid not only had to remember the path it had taken, but also know where to turn or dive to avoid protruding ice pieces or other obstacles. And because ice floes drift continually, Nereid’s navigational software had to keep track of their movements, adding error corrections to its homeward path.

To maximize the vehicle’s reliability in the event of the communication fiber breaking, the team implemented a variety of recovery features and levels of redundancy. If the fiber got cut, they could guide the robot from under the icecap by radio signals. If Nereid got stuck under ice, they would find it using an avalanche beacon.

And if all else failed, the team had an emergency ice-breaking procedure devised. They would drill holes in the ice and deposit heavy weights on Nereid’s top, sinking it to the depths safe from the Polarstern’s massive ice breakers—and then float the robot back to the ship.

Nereid also has to withstand extreme Arctic temperatures, so its materials had to be tested even before it was assembled. Nereid’s upper shell, for instance, is made from blocks of orange-colored syntactic foam made from tiny hollow glass spheres coated with epoxy glue. Before fabricating the shell, lead technology engineer Casey Machado had to ensure that the foam could hold up to the Arctic cold.

“I put a few foam samples in a -40 °C freezer and then hit them with a hammer,” she said. “And I saw what got broken and what didn’t—to get a sense of what materials worked together.”

(In retrospect, the latch problem Nereid had on its first dive probably should have been obvious too, Jakuba said, but it only manifested itself in extremely cold temperatures.)

The engineering team rigorously tested other systems. To check such basic features as navigation and imaging, the team dunked Nereid into a big tank at WHOI facilities. To test the robot’s ability to track the ice floes’ movement above, they used a particular type of Styrofoam which Nereid’s instruments perceived as ice.

“The idea was to rotate the proxy ice over the robot,” Jakuba said, “so we pushed it around, and the vehicle measured its velocity.”

During the next round, Nereid went swimming in the ocean while doing some science under the WHOI docks. “There were all sorts of little critters and algae and other things there,” Machado says. “So we were able to see that the vehicle does what it was designed to do, and can land under something like that, and take a close look at it.”

Finally, shortly before the expedition, Nereid went through the integration testing in Tromsø, Norway, a city located above the Arctic Circle. Tromsø is known for its frigid temperatures, albeit still milder than the areas where the actual research took place. (The latch worked in Tromsø.) The team tested everything except diving under the mounds and valleys of frozen water. Any surprises at sea they would have to solve on the fly.

The robot was now ready for trial by ice.

In the Polarstern’s control room, Judge and Boetius traversed the under-ice world through Nereid’s eyes. Judge described the experience as “video game-esque,” including the first-person view.

“I had a map of where I was heading, just like in most games, and a record of where I was going and where I’ve been,” he said. “And I drove the vehicle with an X-box 360 controller.”

It was surprising how much life existed beneath the ice, said Boetius, who directed the exploration, pointing where to move and what to see. Following Nereid and zooming in and out of images on the screen made Boetius feel as if she sat inside a huge aquarium, sneak-peeking at the underwater Arctic secrets.

“When ice breakers break the ice, it changes the habitat,” she explained—it kills some organisms and messes up the environment of others. Nereid left the underside life undisturbed, letting the team observe the algae blooms and rare creatures.

“I saw gelatinous organisms you hardly ever see because ships would squish them with their propellers,” Boetius said. “These organisms are beautiful, they look like ballerinas in the water.”

At the end of the first exploratory sortie, Judge turned Nereid around to head back to the ship. The water currents had shifted the communication fiber into the vehicle’s path and the robot ran over it, cutting it and severing communications with the ship. The team added extra software features to avoid this in the future, but it did provide a field test for Nereid’s homing ability. It worked perfectly. The robot returned without a hitch. On another flight, the team had to quickly haul Nereid out of the water to prevent a huge fast-moving ice floe from hitting its front camera, which, as Judge put it, “costs more than my house.”

Some flights were smooth and successful. Judge recalls that after one five-hour exploration, the navigation system led him back exactly to the spot where the robot had launched—the hole in the ice made by Polarstern’s ice breakers.

“There was a great sense of achievement,” he said.

There was also a pervasive sense of exploring the great unknown. In one flight, Nereid traveled over the fairly unexplored Arctic Gakkel Ridge system and its hydrothermal vents—fissures in sea floor that shoot up hot water—allowing Boetius to survey life over these unique environs.

Once Nereid is outfitted with a manipulator arm, which Machado expects to happen later this year, it will be capable of advanced sampling tasks such as breaking off pieces of ice, scooping sediment into vials, and capturing animal matter. Boetius hopes it can also bring back fluid samples from the hydrothermal vents to offer insights into their ecosystems which sometimes host unique bacteria and life forms.

The ability to explore these previously unreachable places opens new frontiers for polar science that until now were only a dream.

“This robot was an eye opener,” Boetius said. “Just to see what happens in this ice-cold water when 400 °C degree water shoots up would be amazing.” ME

Lina Zeldovich is a writer based in Woodside, N.Y.