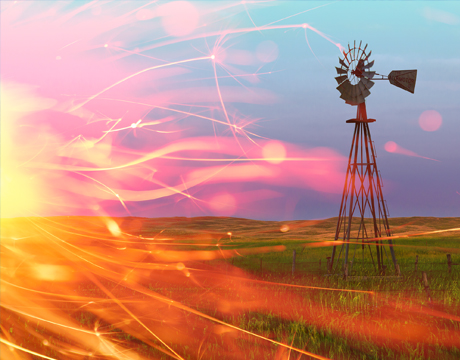 Despite the size of the U.S. electric grid, not all Americans benefit from it, especially those living in rural areas.

The U.S. Department of Energy is committed to closing that gap and has earmarked nearly $10 million to support research that will advance and expand nationwide service, building a more resilient power grid for everyone. As part of this, the agency has invested $1.6 million into a project at The University of Texas at Austin’s Center for Electromechanics (CEM) that’s working to improve real-time grid monitoring systems, using sensor technologies and in-the-field data gathering.

The massive U.S. power grid is made up of nearly 160,000 miles of high-voltage power lines, millions more miles of low-voltage lines, and more than 7,300 power plants. The network connects and provides power for some 145 million American customers.

The network also gets smarter every year. Innovations such as renewable power sources, solar photovoltaics and advanced new energy storage systems are bringing the power of distributed energy resources to the modern grid, turning the legacy network from a one-way delivery system into a two-way street for the flow of electricity. For consumers, these advancements can mean everything from lower energy costs, to cleaner power to reduced greenhouse gas emissions.

But not everyone in the U.S. has access to these advancements.

For You: Using AI to Manage the Grid

Rural areas, located far away from the bulk of U.S. energy infrastructure, have long struggled to maintain their power distribution systems. Much of rural Alaska, for instance, is on isolated microgrids, serving 600,000-plus square miles of remote towns and villages that aren’t part of a larger grid. Many other rural parts of the country are also isolated and often miss out on the reliability and efficiency of modern grid technology.

The DOE and University of Texas hope to change that with their new program.

“The project that we're working on actually is an attempt to put what is likely the largest amount of computing power hanging on a power line that's ever been done,” said Robert Hebner, CEM director and a research professor in the school’s Department of Mechanical Engineering. “The reason for this is that the utilities that serve rural areas have ways of looking at where lines are down – such as where a tree limb is rubbing on a line or an insulator is cracked – but they don't know well enough what's happening on a day-to-day basis before something goes wrong.”

Geographic precision matters in rural areas where many homes and other structures are far apart, making it difficult to pinpoint or access problems in the field. That matters when a technician finds themselves on one side of a creek with the line they need to repair on the other, and the nearest road across is 30 miles back.

The university’s team combines computing power and field sensors with advanced network modeling that enables utility companies to see exactly what is happening on the grid and where any issues are, literally inch by inch and in real time. Utility data acquisition and monitoring systems currently used by most utilities aren’t equipped for real-time monitoring of DERs or real-time processing of large amounts of data.

By leveraging existing and emerging sensor technology, the researchers hope to develop a system where a handful of sensors can cover an entire network.

“The sensors are line connected, meaning they don't need to be grounded, so they can go on any power line,” said Shannon Strank, CEM assistant director. “They're in a small form factor, so our premise is that they won't pose any threat of damage to the line itself, and include built in GPS triangulation so we can put as few sensors on the lines as we need to in order to get the level of fidelity in terms of location determination as we need.”

Operating costs are naturally a concern for many rural cooperatives, so minimizing the number of sensors needed to monitor the grid is a priority.

“The beauty of what we're putting together is that that you can count on two hands the number of sensors on the lines to cover what is quite a large geographical area,” Stank said. “And there’s a very minimal amount of interplay that needs to come from the technicians themselves in order to do maintenance on those sensors. So, it's low operating cost and minimal need to go out and check on these sensors and maintain them.”

The target right now is less than $1,000 per sensor, with fewer than a dozen required to deliver significant benefits to rural cooperatives.

This work is all part of a nationwide push to make the grid more resilient and robust, especially as power generation and distribution systems evolve over time.

One of the bigger issues we’re seeing is that, as we start putting more and more renewables in distributed places throughout the grid, it gets harder and harder to manage everything.
Prof. Robert Hebner, University of Texas

“One of the bigger issues we’re seeing is that, as we start putting more and more renewables in distributed places throughout the grid, it gets harder and harder to manage everything,” Hebner said. “This technology should make it possible to significantly increase the amount of renewables that are in the grid, particularly in these rural distribution grids.”

For example, Texas has a sizable population of people living on isolated ranches with their own solar panels and wind turbines who also need to connect to their own local electric co-op to cover all of their energy needs. A more robust two-way grid, helped by the team’s new monitoring technology, will allow these rural consumers to access more of the renewable energy sources, feeding power back into the system, and reducing the reliance on traditional power plants.

“When you think about it, many rural utility co-ops generally have fewer than seven meters per mile,” Hebner said. “I think in Chicago they have something like 7,000 meters per mile. So cities don’t need the same level of sensitivity that they need in the country. But a lot of the information needs are common, and I think we’re going to find a much larger market for this technology once these grid improvements start to roll out.”