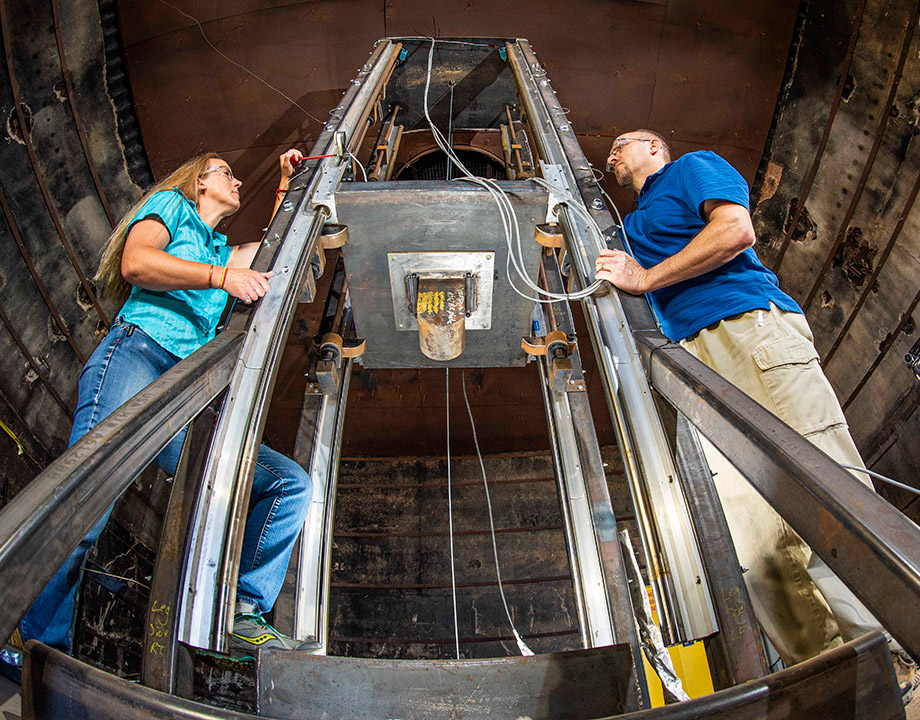 How to Destroy Lithium-Ion Batteries?

Stanley Whittingham, John Goodenough, and Akira Yoshino were awarded the 2019 Nobel Prize in Chemistry for their contributions to the development of the lithium-ion battery. But researchers at Sandia National Laboratories in Albuquerque, N.M. are doing everything they can to destroy the battery.

To that end, they recently began dropping a weight equivalent to a newborn elephant from their newly built battery-testing tower that coincidentally corresponds to an adult elephant’s height.

This way they’ll discover the amount of force and weight a lithium-ion battery can withstand before it’s destroyed, said June Stanley, a Sandia mechanical engineer who has worked on the tower project.

All this testing is part of the effort to improve battery safety, Stanley said.

Lithium batteries are everywhere these days, from cellphones to laptops. They’re the batteries that power the ever-increasing fleets of electric vehicles. They help store energy in large-scale energy grid storage systems. The Nobel committee said that Li-ion batteries “have revolutionized our lives since they first entered the market in 1991 ... and are of the greatest benefit to humankind.”

Stanley, an ASME member, began work on the testing project more than two years ago, when she spearheaded the manufacture and installation of the drop tower and worked on the mechanical design, safety and engineering controls.

“One of the things we do in this abuse testing is to see how batteries react,” Stanley said. “That can help develop protocols for, say, first responders who deal with a battery fire. Or in an electric-vehicle accident where maybe the battery isn’t on fire but has been compromised.”

In the aftermath of the drop, the batteries are unstable and the safety status of about half the cells is unknown, she said. “It certainly helps with a better understanding for first responders to handle a situation like that.”

“We either crush them or use nail penetration,” she said.

The testers also roast them at high temperatures, soak them in saltwater, deliberately short-circuit them, and even shoot them with lasers. But the testers haven’t been able to understand how gravity acts on the batteries until they built the tower.

“Our testing methods were slow,” Stanley said. “We’re talking speeds of, for example, one millimeter per second.”

The drop tower creates a more realistic scenario, she added.

Because the tower tests happen at the acceleration rate of gravity, the tests are over within seconds.

“Actually, it’s less than a second,” Stanley said. “If you look at data from when actual impacts stopped and reversed direction it’s .01 seconds. These are really fast tests.”

The drop tower looms inside a hangar-like building while researchers control the tower from inside a trailer about 30 yards away. The building is vented so smoke from any battery fires can be quickly cleared.

A researcher sets a battery in a steel tray bolted to a load cell that will measure the impact force at the base of the tower as a weight of at least 200 pounds is released from above.

The push of a button unleashes the weight. Gravity takes over. Wires connected to the battery and the tower measure speed, force, temperature, and voltage. Cameras record the impact and all data is instantly fed to computers in the trailer.

Because of the weight and impact, most batteries snap in half rather than get crushed, Grosso said.

So far, the team has tested single-cell lithium-ion batteries as well as 12-pack of the batteries taped together.

While the tests have not produced the sparks and heat that would occur in a slower-moving hydraulic crush test, the researchers have collected useful data, Stanley said.

In the aftermath of the drop, the batteries are unstable and the safety status of about half the cells is unknown. “It certainly helps with a better understanding for first responders to handle a situation like that,” she said.

The team plans to improve the tower as more tests reveal needed adjustments and as customers ask for different types of tests.

“We have big plans for this,” Stanley said. “Right now we use our typical video recording equipment that we’ve used in other abuse tests, but we want to get high-speed cameras to capture what’s going on in .01 seconds and to implement force multipliers on the drop tower itself—like springs or linear actuators—so we have more than gravity to accelerating the rate.”

Other plans call for adding gas-pressurized pistons to boost the downward acceleration of the weight, increasing the impact force.

“To get more impact force we can increase the mass or the acceleration of the object impacting the battery, or both,” Stanley said. “Right now, we’re accelerating at the rate of gravity. Our goal is to have a much higher rate of acceleration, thus more force.”