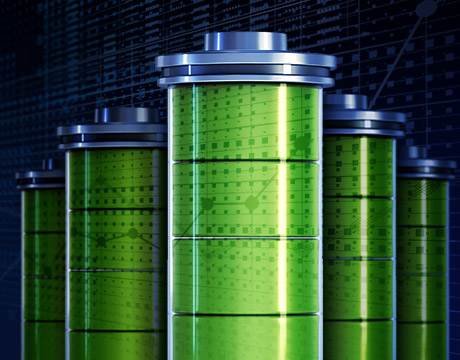 Many of our daily activities depend on battery power - especially our mobility needs. But lithium-ion batteries pose significant risks. They have a tendency to overheat and can be damaged at high voltages. The liquid electrolytes are highly flammable. If the separator fails and the electrodes come into contact, energy is released that can lead to thermal runaway and combustion, causing great risk.

Researchers are now taking a more detailed and serious look at the structure of lithium batteries and how to improve them. Many believe that degradation and failure are related to flaws within the battery microstructure that lead to inhomogeneous transport of lithium ions.

At George Mason University’s Electric Vehicle Safety Laboratory, for example, researchers utilize experimental and computational methods to analyze the integrity of lithium-ion batteries under various conditions, especially scenarios in which the battery is physically damaged in an accident. “We have discovered that mechanical battery failures correlate with electric internal short circuits,” says Elham Sahraei, assistant professor of mechanical engineering. She hopes the lab’s work will be used by battery manufacturers to optimize battery design and improve the protective structure around the batteries.

Sometimes a breakthrough can be a simple modification. For example, to reduce the probability of an electrical short upon impact, researchers at Oak Ridge National Laboratory modified the design of lithium-ion batteries to include slits along the electrodes. These allow the batteries to break up into smaller components upon impact, reducing the risk of fire. If a short circuit still occurs, the current and heat are limited to the area around the short circuit, and does not involve the rest of the battery’s energy that is dispersed across the other components.

"Small batteries pose a much smaller hazard when they are accidentally shorted than do very large batteries," says Nancy Dudney, an Oak Ridge researcher. "This innovation may allow the large batteries used in most vehicles to fragment into many small batteries if damaged in a collision. With such an innovation, device manufacturers can reduce the weight and expense of heavy-duty containers that are normally needed to protect their batteries from mechanical abuse."

Another structural problem for lithium-ion batteries is the formation of dendrites—tiny growths of lithium that grow inside the batteries and compromise their performance. Some dendrites are so rigid and grow so fast that they penetrate the separator between the electrodes, resulting in fire. Researchers from the Chinese Academy of Sciences and the University of Chinese Academy of Sciences have discovered a new battery design that eliminates dendrite formation. The solution is a thin asymmetric solid electrolyte that is rigid on one side and soft on the other. Test results are promising: after 1,750 hours of cycling, batteries with the conventional electrolyte exhibited rough textures reflective of dendrite formation, whereas the new electrolyte showed no textural changes, even after 3,200 hours of cycling, suggesting that dendrite growth had been suppressed.

The most common electrode chemistries for lithium-ion batteries are lithium-cobalt oxide for the cathode and graphite for the anode. New materials being developed with improved electrical properties include vanadium pentoxide, iron fluoride, and lithium-nickel-manganese alloys. Tin-based oxides and niobium-tungsten oxides are attracting considerable interest as a cathode material because of their high energy storage capacities.

Innovative research is being carried out with two of the most basic and well-understood materials used in manufacturing—silicon and carbon. Silicon nanoparticles as anode, for example, can outperform the commonly-used carbon graphite.

"An atom of silicon can store about 20 times more lithium than an atom of carbon," says Gene Berdichevsky, CEO of California-based Sila Nanotechnologies. "Essentially, because it takes fewer atoms to store the lithium, you can have a smaller volume of material storing the same amount of energy." In similar research, scientists at Norway’s Department of Energy Technology have found a way to mix silicon with other elements to create an anode that is stable and long-lasting, with up to five times higher capacity than conventional graphite anodes.

Silica can also keep batteries from exploding. Scientists at Oak Ridge National Laboratory mixed silica with a conventional liquid electrolyte to create an impact-resistant electrolyte. If a battery ruptures on impact, the silica particles clump together and block the flow of fluids and ions. The spherical, 200-nanometer-diameter particles of silica look like super-fine-grained sand. "If you have that very uniform particle size, the particles disperse homogeneously in the electrolyte, and it works wonderfully," says Gabriel Veith, lead researcher.

Graphite (carbon) is already a preferred anode material. A related compound, graphene, is a highly conductive, lightweight, and easy-to-manufacture material that is being tested as electrode material. A European research team recently developed a tin oxide-antimony composite nanoparticle material attached to a base layer of graphene, which provides strength and conductivity.

"Enriching the nanoparticles with antimony ensures the material is extremely conductive," says Dina Fattakhova-Rohlfing, lead researcher at the Institute of Energy and Climate Research in Jülich, Germany. "This makes the anode much quicker, meaning that it can store one-and-a-half times more energy in just one minute than would be possible with conventional graphite anodes. It can even store three times more energy for the usual charging time of one hour."

Samsung Advanced Institute of Technologyin 2017 announced a new battery material called “graphene ball” that enables a 45 percent increase in capacity, and a charging speed that is five times faster than standard lithium-ion batteries. A battery based on the graphene ball material requires only 12 minutes to fully charge, according to Samsung, adding that the battery can maintain a stable 60 °C, a key for electric vehicles.

Instead of using flammable liquid electrolytes, another approach is making electrolytes from solid materials, which are less likely to combust. The drawback is that ions have more difficulty moving through solids rather than liquids, a significant engineering challenge. Since a highly flammable material is being replaced with a solid material, the battery should also withstand higher temperatures and therefore have higher capacity.

Ionic Materials, a Woburn, Mass.-based company, has developed an ionically conductive, fire-retardant solid polymer that can replace the liquid electrolyte in a lithium-ion battery. The company claims it is the first solid-state polymer that can conduct lithium ions at room temperature. The material is flexible, low-cost, and highly durable, eliminating safety risks while boosting battery capacity and performance.

“By eliminating liquids, these new batteries will enable substantial improvements in energy density, cost, and safety, and make possible the use of chemistries that have been considered ‘the holy grail’ for batteries,” says Ionic Materials CEO Mike Zimmerman. “The technical hurdles Ionic proposes to overcome are significant, but such challenges we choose to accept, as the world needs our solution.”