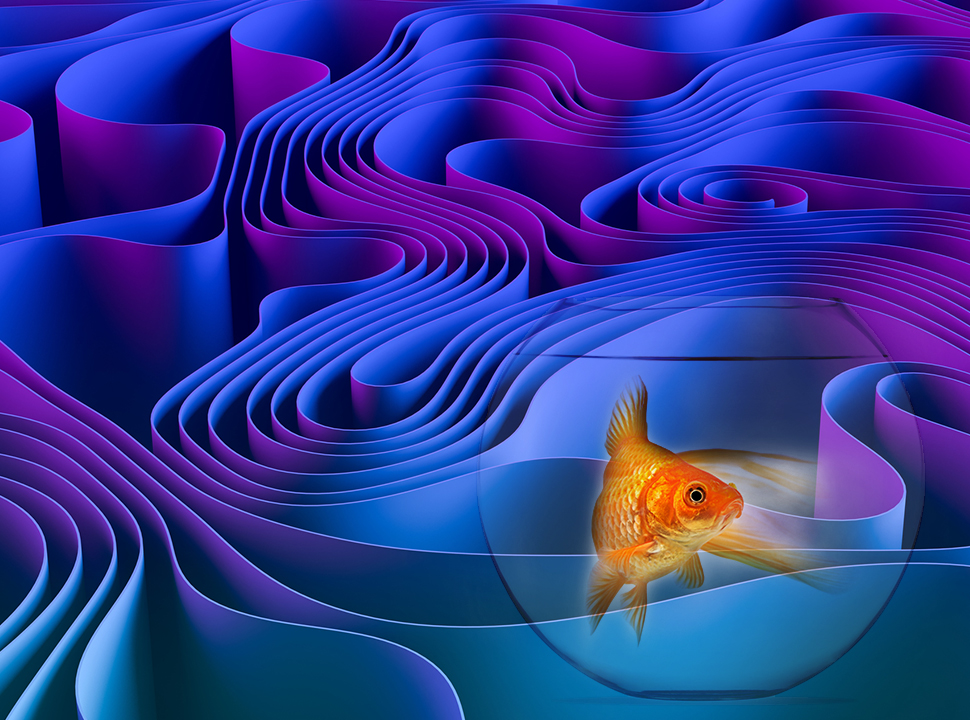 Researchers at Ben-Gurion University put goldfish in control of their own cars. Turns out they’re better drivers than a lot of people on the road.

Fish come in many colors and with many locomotive abilities. Some fly, some walk, most swim. And now, thanks to researchers at the Ben-Gurion University of the Negev, some drive.

Goldfish have been domesticated for a good thousand years and in that time, they have been trained to swim to toward specific sounds, to navigate through mazes, and to differentiate between various shapes, among many tricks scientific and otherwise. But most of these performances have occurred in aquariums roughly a square yard in size. 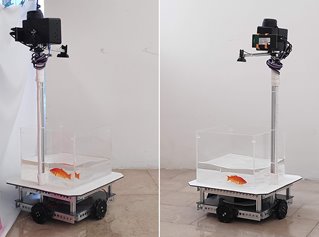 Researchers put a fish tank on a cart with a motor and wheels. Above the tank, a simple web camera looked down at the water and fed its image to a signal processor. Photo: Ben-Gurion University
“A small water tank is not a good representation of a goldfish’s environment,” said Ronen Segev, a neuroscientist at the university. “We wanted to do break this limitation, take the fish down the hall, which is about 30 times larger than the tank in the lab, and take the fish outside on campus, which is 1,000 times larger than the water tank.”

To do that, Segev and his colleagues put a fish tank on a cart with a motor and wheels. Above the tank a simple web camera looked down at the water and fed its image to a signal processor.

“Finding the fish is easy—a big block of orange inside the picture,” said Shachar Givon, a graduate student at the university and lead author of the paper, "From fish out of water to new insights on navigation mechanisms in animals" published in Behavioural Brain Research in February 2022. “Then, with some simple calculations, it finds the center of mass and knows where the head and tail is.” From there it’s a cinch to know how the fish is oriented and where it is in the tank. The vatmobile was also outfitted with a lidar so that the software would know its location in the room. 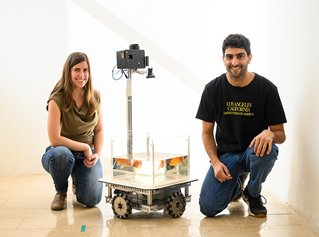 Shachar Givon (left) and Matan Samina hope to test the ability of the fish to steer through larger more complicated spaces in future experiments. Photo: Ben-Gurion University
To test these capacities, Segev, Givon, and their colleagues first taught the fish that proximity to a colored target on a wall would bring them a food pellet. Then the fish had to learn to move the vehicle with its position and orientation in the tank. The researchers had to cover the tank with a black cloth after the daily half-hour training session or the fish would unlearn their driving abilities each day. They also only fed them once every two days to keep the fish hungry for their pellet.

After 10 to 15 days, six different goldfish became proficient enough at driving to head directly to the target for food. They were even able to steer around obstacles to get there. “When it came to a border,” said Givon of the first fish to earn its permit, “it turned back and tried another angle. That was really a ‘wow’ moment for us.”

But, however skillful the fish, they have not yet been issued their full licenses. As of now, they can’t control speed, or, for that matter, stop. To avoid crashes, the aquacar stopped on its own when it came close to an obstacle or wall. And when it moves it’s at a constant speed. That could change for future finned motorists. “When fish want to swim fast, you see them do a lot of tail flicks,” Givon said. “The frequency of tail flips could determine how fast the vehicle will go.”

The next batch of experiments will test the ability of the fish to steer through larger more complicated spaces: across campus, around corners, and through large scale mazes. It’s all part of an effort to understand the cognitive map that fish use to get around.

“Understanding fish navigation is an important thing,” Segev said. “Whether you are going to see Tesla cars run by goldfish anytime soon . . . I suppose this will not happen.”