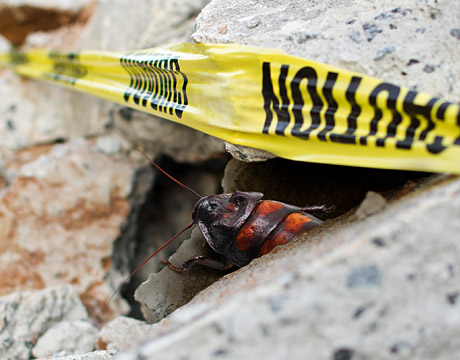 Researchers are developing technology that can be fitted to cockroaches to map unstable areas after a disaster.

Biobots to the Rescue

It is a serious approach to defining and even identifying the parameters of immediate disaster response although the plan has the makings of a Grade B horror movie. North Carolina State University researchers are moving to the next level in using cockroaches to penetrate collapsed structures or dangerous areas, pairing them with new software, hardware and aerial drones to gather digital information they believe will produce maps of compromised areas and possibly save lives.

The roaches—Madagascar Hissing Cockroaches that can reach three inches in size at maturity—would be fitted with small platforms of sensors and released into an area. Researchers already have demonstrated with some success the roaches, or biobots now that they are fitted with the electronic backpacks, can be remotely controlled. Now, they believe they have the software and hardware to allow the roaches to relay data to a hovering drone that can send the data to a central control.

As the biobots roam through the area, their movements would be confined within by an electronic beacon emitted by the drone. Data is collected by each insect, and is shared or can be accessed by one of the group. Just one member of the swarm can transmit all of the collected data to the drone. Using newly developed software, operators can then stitch together the data to form an image of the space within which the biobots are working.

Edgar Lobaton, associate professor of electrical and computer engineering, is part of the NC State team, who has co-authored two papers describing the work. “We don’t want to control each individual’s behavior independently,” he says. “The idea is to exploit their natural behavior. The idea is to release a swarm of sensor-equipped biobots, such as the remotely controlled cockroaches, into a collapsed building or dangerous unmapped area.”

The key is development of the electronic beacon to control the swarm. “There’s no way really to naturally contain them in a specific area,” notes Lobaton. “So now we propose to use a leader to contain them: a drone to guide or herd the swarm.”

What the swarm will be carrying are tiny backpacks fitted with small microphones as well, to pick up sounds that could help emergency responders locate and rescue survivors. Led by Dr. Alper Bozkurt, also an NC State assistant professor of electrical and computer engineering, a team has developed two types of customized backpacks fitted with microphones. One type has a single microphone to capture “relatively” high-resolution sound from any direction. The second type is fitted with an array of three-directional microphones to determine the direction of the sound.

Researchers have developed algorthims to analyze the sound from the array and localize the source. Then, they can steer the biobots in the proper direction using the beacon as a sort of mobile corral in which they are contained. As the corral moves in one direction, the biobots move in various directions within until they reach the electronic boundry.

This is significant in a few ways, says Lobaton. It ensures the biobots will remain at the site and within range of each other to form a wireless network. It can also steer the swarm to light, where the tiny solar panels on the backpacks can recharge.

Lobaton says a strong radio beacon is enough to penetrate into portions of a collapsed structure and contain and direct the swarm. He says their research shows they will lose contact with a number of individuals but that should not interfere with the task of mapping an area. “As long as we can get a signal from any part of the swarm, we will be able to retrieve data on what the rest of the swarm is doing,” he says.

Bozkurt already has successfully demonstrated cockroaches using the backpack technology, but Lobaton’s latest experiment used small 1.5-inch robots that simulated cockroach behavior after being released into a maze-like space. Insects have both drawbacks and advantages compared to robots, and other scientists are opting to use the real live creature.

Scientists at Nanyang Technological University in Singapore are using large beetles, implanting electrodes into their muscles to control how they walk. Others at Cornell University have successfully controlled the flight of moths with implanted devices.

In the case of the North Carolina State research, that may not be practical because they are using numbers of insects. They are also a cheap, ready-made platform, compared to a robot that has to be designed and manufactured from numerous small parts. An insect robot also needs complicated code written to allow them to overcome obstacles.

While the backpacks are tiny, Lobaton says they are fitted with inexpensive off-the-shelf technology. The roaches are put into a refrigerator where the cold temperature stuns them and reduces their metabolism, making it easier to fit them with the backpacks.

“One prototype cost only about $100,” he says. “A lot of this technology is virtually off the shelf.”

Lobaton’s next step is replacing the robots with the backpack-fitted roach cyborgs to duplicate their test results. “We need to integrate more information,” he says, pointing to the exchange of information such as sound from microphones and data for mapping between two or more biobots.