Bots and Bugs in Harmony

Bots and Bugs in Harmony 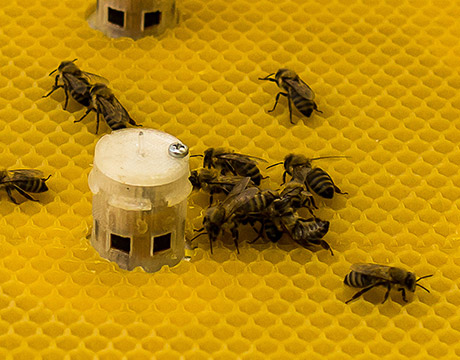 Robots that can be accepted by animals as conspecifics are great tools for behavioral biology. Image: EPA

Robot designers have been emulating lifeforms for some time now. Insects, mammals, fish, reptiles—you name it—they’ve all been tapped to make our machines more efficient, productive, and amusing. But now researchers at Switzerland’s École Polytechnique Fédérale de Lausanne are turning that process on its head. Instead of borrowing from the beasts, they’re helping them.

Bertrand Collignon, a researcher at the university, has programmed a cheap, accessible, and not very animal-like robot to help ants harvest food. In doing so, he has created one of the first purely autonomous robot/animal systems that outperforms what either the robots or the animals could do on their own. And the success of this synergy between insect and machine may someday turn around and help us as well.

In setting out to help ants collect their food, Collignon decided to divide the duties between bot and bug. Ants would do the hunting and the robots would do the gathering.

Just how to do that presented Collignon with his first challenge.

“Even if there is no food in the environment, there is a fluctuation in the behavior of ants,” he says. “There is a rhythm of activity that can last for a few minutes or hours. The activity is not constant.”

One possibility was to count the ants going in and out of a colony. When the flow remained under a certain threshold, the robots would assume the ants had not yet found food. When it went above another threshold, they would know the ants had discovered a source. But those thresholds are different for every ant colony. Collignon wanted a system that would work with any colony anywhere without the need for initial data collection or additional research.

Identifying and counting individual ants is not a simple programming problem. So Collignon decided to count the number of moving pixels at the entrance of an ant nest. This straightforward method would work with any colony size.

The final configuration used a Raspberry Pi camera and computer at the mouth of the nest. When it detected a sharp uptick in pixel activity, the harvesting drones were sent in. These Thymio robots, programmable toys that cost about $200, followed the line of ants to the sugar source, picked it up for them, and delivered it to the nest.

The ants did not seem especially appreciative. “We don’t expect them to realize that the robots are helping them,” says Collignon.

The whole set up was designed to be easily replicated. The Raspberry Pi computer, the Thymio robots, and the Python programming language were all created to help educate kids. “That was one of the ideas, to keep everything accessible” says Collignon. “Anyone can do this experiment at home or at a school once they have the software.”

But children and ants aren’t the only ones to benefit from this research. Such a robotic system would help in any situation where animals are used as detectors.

Dogs in airports, for instance, are trained to exhibit a specific behavior when they find drugs or explosives. Right now we need a human to interpret that behavior. With a system like Collignon’s, “You don’t have to be close to the dog to see what he is doing, so you could have a higher number of agents,” he says. Similarly, hundreds of ferrets could be unleashed in collapsed buildings. Outfitted with a biologger to monitor their behavior, emergency workers could know when they reached anyone trapped in the rubble.

“There are some natural agents that can still outperform artificial ones for some tasks,” Collignon says. “For energy management or sensing, it’s very hard to be as good as nature.”

For Further Discussion
We don’t expect them to realize that the robots are helping them. Prof. Bertrand Collignon, École Polytechnique Fédérale de Lausanne