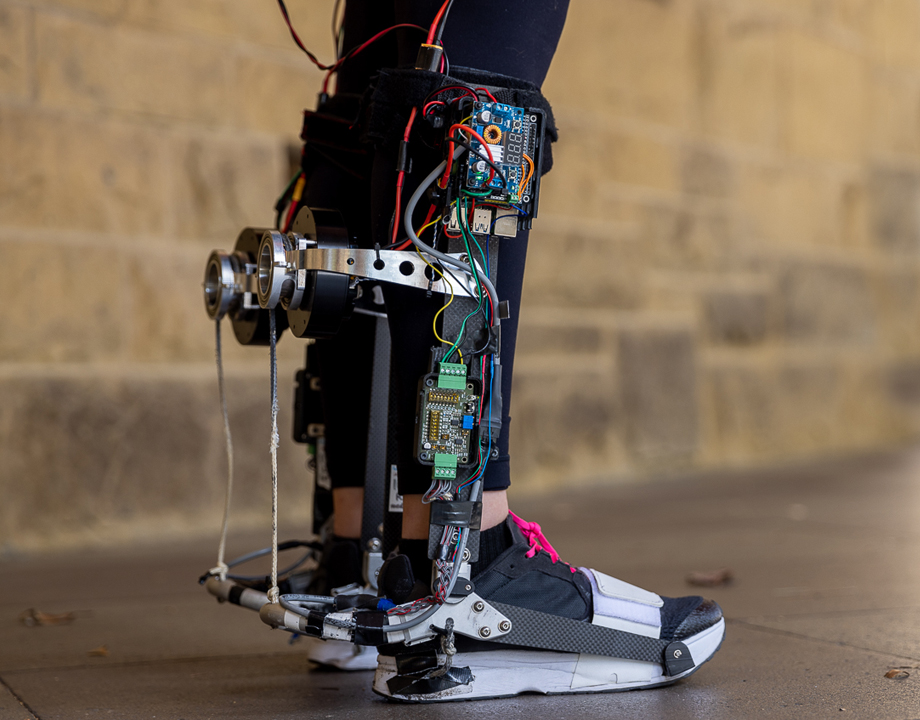 Assistive devices are complicated and vary between users, so researchers have created an exoskeletal boot and emulator to better model how humans work while unlocking assistive device design.

Biomedical Engineering Medical Equipment and Device Manufacturing Robotics Technology and Society
Predicting what a person needs from an assistive device is complicated, and varying preferences for control and comfort have made it difficult for engineers to create practical exoskeletal devices. But a group of researchers at Stanford University have set out to solve this issue for their exoskeleton boot with a unique approach.

“People are not robots,” said Steve Collins, associate professor of mechanical engineering and head of the Biomechatronics Laboratory at Stanford. “You can predict pretty well how a robot is going to function if you change the design of one of its limbs or if you change the control. We have pretty good models of robot physics. But we have poor models of how humans work, especially of the nervous system, which is essential to understanding the design of assistive devices.” 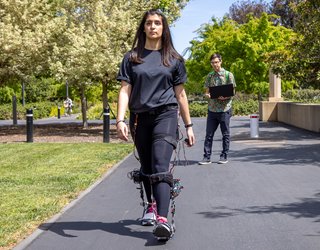 Assistive devices are complicated but unlocking just how humans work stands to make them less so.
Collins and his team quickly realized the challenge with building the boot did not lie in the hardware design, energy density, or even in creating a better actuator, but in knowing what exactly a person’s needs are. So, they have spent the past 10 years focusing on speeding up and systematizing the design process by enabling rapid iteration of designs they could test on people.

To do this, they came up with a tool they call an emulator, which is a combination of a treadmill and an exoskeleton tethered to external motors and a computer. The emulator simulates what different iterations of an exoskeleton would feel like for the person wearing it. To design the boot, the team had each participant walk through about 300 different conditions, which gave them valuable information about various biomechanical outcomes that they used to determine which settings provided maximum benefit for the user.

“With the emulator, it’s about figuring out what device a person wants first, instead of having to design some new device that takes months or years to develop before it's ready for tests,” Collins said. “We were able to change the code and test the device within minutes, so we could cycle through the hardware options really fast.”

Collins elaborated that when it came to cycling through the different parameters, the emulator used a covariance matrix adaptation (CMA) algorithm to determine the next best option to try for the user. This significantly cut down on the number of iterations they had to perform and helped in ruling out outlier measurements that are inevitable when working with humans.

“The big problem is that human measurements are really noisy,” he said. “As you're moving, your energy cost or your speed can fluctuate up to five percent, even if your movements are exactly the same. This makes it hard to estimate what's happening in the user’s body and tune the device. So we started using the CMA formula to optimize systems because it’s insensitive to noise. CMA isn't trying to map the whole landscape, it's just trying to make a good decision about what to try next. And so, it scales a lot better in these cases than other algorithms.”

Using the design guidelines provided by tests with emulators, the researchers designed an untethered exoskeleton that is worn at the ankle, which runs along the back calf and stops just below the knee. It uses a high-torque motor, developed for quadrotors, to provide assistive torque, powered by a battery pack worn at the waist. The ankle is fashioned out of carbon fiber and aluminum making it lightweight. Sensors along the exoskeleton gather data that allow the system to adjust in real time to the person’s movements, optimizing the torque for the user.

With the exoskeleton, one hour of walking showed that a person could move about 9 percent faster and expend about 17-percent less energy compared to regular shoes. Collins said this is like taking off 30 pounds of weight, which makes a huge difference for people who are experiencing mobility issues. They also tested the boot’s performance on steps and inclines, they found similar improvements.

“One of the main concerns people face as they get older is difficulty ascending the stairs,” he said. “It's about strength and endurance, and so the device can give them years back as far as their mobility is concerned.”

In addition to those with mobility challenges, Collins and his team are looking forward to seeing how the boot helps people in high-impact or strenuous professions. Military, first responders, and medical professionals could all benefit from the added boost in speed and strength.

However, the boot is not designed for running just yet, and Collins said they’re working on different designs for more specialized movements. They’re also focusing heavily on enhancing balance, which is posing some unique challenges.

“Balance is actually really hard to measure,” he said. “Nobody knows how to assess a person's balance or measure whether a person’s balance is improved or worsened. So, as we did for this design, our first effort is to try to assess balance before we can attempt to improve it.”

As the developments continue for this device and others, the team is hopeful that they can find an avenue for commercialization so that they can begin making their products available to the public.

Cassandra Martindell is an independent writer in Columbus, Ohio.