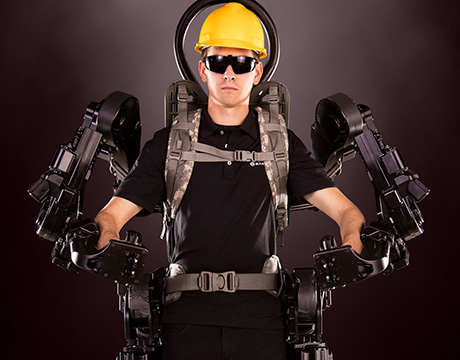 They’ve been called exosuits, wearable robotics, augmentation systems, and even the armor of the 21st century. But they are best known as exoskeletons.

Science fiction enthusiasts see them as the inevitable blending of man and machine, hoping that once the technology is perfected, we’ll all be flying around like Iron Man. While that may be a bit optimistic, applications of exoskeleton technology are already making their way into the industrial, medical, military, emergency response, applications.

Exoskeletons are officially defined as “wearable devices that augment, enable or enhance motion, posture or physical activity,” according to the ASTM International committee developing exoskeleton standards.

But Bill Billotte, the National Institute of Standards and Technology (NIST) physical scientist who serves as vice-chairman of ASTM Technical Committee F48, gets excited when he thinks about these mechanical extensions of the human body.

“Imagine what your life would be like if you never lost a step?” Billotte said. “What if you could walk, run, jump, lift and even dance at your full capability—or beyond—your whole life? A world that didn’t need ramps, where jobs were never ‘back breaking,’ and everyone could perform to the best of his or her ability with equal endurance, strength and dexterity. This is why we need exoskeletons.”

Getting from that vision to a practical, useful, and affordable exoskeleton isn’t easy or quick. Just ask Ben Wolff, the chairman and chief executive officer of Sarcos Robotics, a Salt Lake City, Utah, company, where the Guardian XO Max exoskeleton has been in development for nearly 20 years.

“When we started out to create a full-body, powered industrial exoskeleton robotic system, the challenges were so daunting that we wondered if the effort would yield a commercially viable product with real applications or just a scientific novelty,” Wolff said. “It took almost two decades of innovative R&D to achieve what no other robotics company in the world has done: power a human-scale robot doing meaningful work for up to eight hours on a single charge.”

When Wolff and his team started work on the Guardian XO in 2000, they decided to focus on a design that would enhance the whole body, allowing a person to lift up to 200 pounds for eight hours without fatigue. “We wanted a suit that would duplicate how human joints and muscles operate but with superhuman capabilities,” he said. “The perfect synergistic relationship between human and machine.”

The current model, slated for final testing this year and commercialization in 2020, consists of highly dexterous, computer-controlled and electronically actuated arms mounted on a track (wheeled) base. The user can get in and out of the Guardian XO in less than a minute. A suite of sensors is integrated into the hardware so that the armor responds intuitively to a person’s instincts and reflexes. Most importantly, the entire weight of the suit, as well as that for any payload, is transferred through the exoskeleton’s structure and wheels into the ground.

The biggest challenge for Wolff and the Sarcos engineers was power consumption. “Our first exoskeleton model required 6,800 watts and the batteries drained fairly rapidly,” Wolff explained. “Thanks to technological advancements in instrumentation and power components, someone wearing our current suit can carry 150 pounds at 3 miles per hour for an entire day on less than 500 watts.”

Power wasn’t a concern when Joseph Zawaideh and Mark Doyle co-founded Levitate Technologies in 2013 in San Diego to develop and fabricate a passive exoskeleton device designed to augment extremities rather than the entire body.

Read an ASME Long-form story on Cobots: Rise and Fall of Rethink Robotics

“Mark and I were working as biomedical engineers and observed that surgeons were getting extremely fatigued moving their arms in repetitive but highly focused movements for hours at a stretch,” said Zawaideh, Levitate’s vice president of marketing and development. “We felt that wearable robotics might be a great solution, so we set out to design a system that would be comfortable, cool, smooth operating with little or no friction, and allow precision movement at all times.”

The result—after eight generations of prototypes—is the Airframe exoskeleton, a strictly mechanical, lightweight, jacket-like suit that supports the musculoskeletal system of the upper body. The device is custom fitted so that it integrates seamlessly with a person’s unique body type and size.

Best of all, Zwaideh said, Airframe requires “no batteries, no software, not even any lubricant.”

“It doesn’t make you stronger like other exoskeletons. It takes the edge off by transferring the weight of your arms from the shoulders, neck and upper back to the body’s core,” Zawaideh said. “It engages a pulley when your arm is raised and gradually releases as it’s lowered, resulting in just the right level of support to reduce tension and avoid fatigue.”

Zawaideh said what has surprised him and his colleagues most is how well their device performs its mission.

“We expected to see relief to the lower back and shoulder but found that the Airframe lowers exertion levels by as much as 80 percent,” he said. “Considering there are more than 650,000 cases of work-related musculoskeletal disorders annually resulting in $50 billion in lost productivity—that’s $1 out of every $3 spent on worker’s compensation—it’s easy to see what this could mean to a lot of industries.”

Companies are definitely buying into wearable robotics. Sarcos’ investors include Caterpillar, GE Ventures, Microsoft and Schlumberger. Levitate’s Airframe is already on the job at BMW, Boeing, John Deere and Toyota.

Both firms are actively involved in the effort to standardize exoskeleton performance and safety, working with standards development organizations such as ASTM and federal agencies like NIST.

“If we get the metrics right, the whole exoskeleton industry, and more importantly, the end users, will benefit,” Wolff said.

What makes it all worthwhile to Zawaideh—and a sentiment echoed by Wolff and others who have helped move exoskeletons from science fiction to commercial reality—is how the technology improves the quality of life for the humans who wear them.

“If someone says to me one day, ‘I retired healthier because of your device,’ then we’ve succeeded beyond our wildest dreams,” he said.

We wanted a suit that would duplicate how human joints and muscles operate but with superhuman capabilities—the perfect synergistic relationship between human and machine.Ben Wolff, Sarcos Robotics