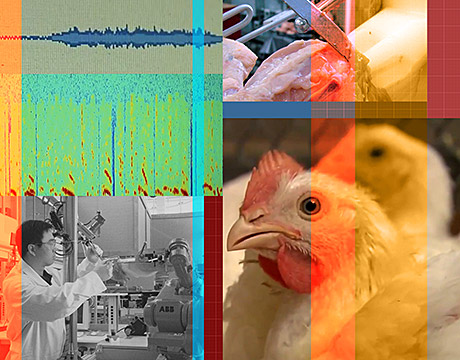 Engineers using sensors, vision technology, and artificial intelligence have made great strides in developing autonomous vehicles and devices for the health care field have laid the groundwork for greater use of industrial robots in other industries.

The food industry, generally thought of as an early adopter of new technologies, is no exception. Renowned at excelling at automatic and repetitive tasks, robots have the potential for cutting production costs, improving product quality and reliability, and increasing speed of operations and workplace safety. However, challenges using robots still remain in certain tasks and activities, such as in processing raw food, checking for quality control, and interacting with their human colleagues.

Primary processing of raw food like poultry, which includes sorting, butchering, and cutting, has turned out to be much more complicated than expected.

With funding from the state, Daley’s group is specifically focused on developing robotic systems with advanced sensors, robotics, computer simulation, and control technologies to improve productivity in the poultry industry, which accounts for more than half of the Georgia’s agribusiness in Georgia.

“I expect within another year or so we are going to see machines out there doing some of these operations we couldn’t do before,” he said.

Quality control and safety when robots interact with humans require lots of data, training and time, said Karen Panetta, dean of graduate education for the School of Engineering at Tufts University. “The big challenge is how do you get [the robot] to learn reliably,” she said.

She leads a team developing algorithms for robot vision and imaging applications. Her focus stems from her interest in detecting tumors and threat objects in the body by getting computers to “see” and evaluate images as a human does. This is the type of capability that robots in the food industry will need for tasks such as quality control, scanning food for something like harmful bacteria, or preventing itself from hurting a human.

For simple tasks, like searching a batch of potato chips for a burnt one, the robot is usually trainable, but looking look for bacteria in a head of lettuce gets more complicated because vision sensors alone aren’t sufficient, Panetta says. Her work involves using a combination of sensors, imaging, and artificial intelligence.

“When you have outliers [such as undesirable cells in the body or unwanted microorganisms in food] and are doing a classification, you need to be able to say with absolute certainty ‘yes, this is’ or ‘no, it isn’t.”

Her team has also been working in the area of industrial safety, where she says there are very few guidelines about human interaction with robots.

“When you expect robots to be dynamic and to adjust to their surroundings or their environment, you exponentially complicate the problem,” she said. “The robot has to be smart enough to say, ‘Oh there is a human nearby, let me get out of the way or let me stop.’”

Industrial accidents typically happen when a worker tries to clear a jammed operating line, gets into the robot’s space, and the robot just keeps going.

“That’s a hard problem to solve,” she said. “You can put in a boundary and say never go this far, never within X inches of a [human]. That’s not enough. The robot has to be reactive and smart.”

On the poultry processing line, Daley explains that the difficulty with some primary tasks, such as sorting and cutting chickens, in contrast to the follow-up secondary processing when ingredients are more standardized, stems from the fact that birds are varying shapes, sizes, and weight. While the poultry industry has become better at minimizing the differences through breeding, the variability is still a big challenge when it comes to automating processing, Daley said.

As an example of just one task, he explained that in de-boning a breast, the industry is not happy with the yield of any automated devices because the angle that the meat needs to be cut to achieve the greatest yield can vary greatly from bird to bird. One project his team is developing is a robotic cutting and deboning system that uses 3D imaging and artificial intelligence to sever tendons and joints on bird front-halves in preparation for the removal of the wings and breast meat. The system can think and react to its environment as a human does but works faster and better, he said.

Daley said the team first tackled what it considered significant stumbling blocks using a slower, older robot to demonstrate proof of concept. These included whether the robotic cutting arm could do the sensing and process algorithms necessary to generate ideal cutting trajectories and then to implement the trajectory properly. With that step completed, the team now is looking at implementation using the current generation of robots for a commercially viable solution in terms of operational speeds and cost. He is optimistic that it will be one of those solutions available soon for trial.

Another ATRP robotic project progressing along the same timeline is expected to improve production even before broilers get to the processing plant. A team is working on a mobile autonomous robot that will continuously monitor the birds and conditions in commercial chicken houses such as temperature, humidity, food delivery, water delivery, and lighting, and perhaps even locate and pick up eggs. These tasks typically require several visits a day by a human.

The team is now licensing screening and imaging technologies from other companies.

“We can leverage a lot of the work in other fields to tackle this problem so that it will be more affordable,” Daley said. “These are things we couldn’t do years ago.”

If you go into most poultry plants today, you still don’t see many robots on the processing line there.Wayne Daley, Georgia Tech