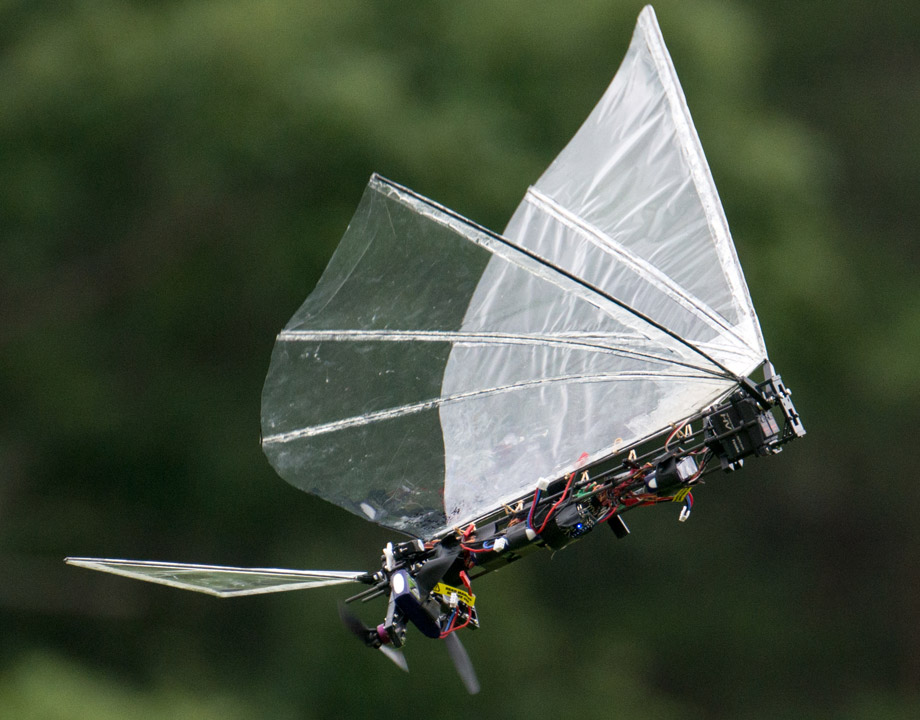 This robotic drone flies, glides, soars, and dives like a real bird. Photo: University of Maryland and University of Southern California

It takes about fourteen days—and thousands of prior generations—for fledging ravens to master flight. It is a feat so complex that a team of mechanical engineers has spent 13 years designing and improving their drone bird, Robo Raven.

Robo Raven has demonstrated a number of robotic bird firsts, as well as taught its developers the importance of whole system thinking, testing prior to costly and risky real flights, and thinking outside the box.

“We wanted to go into this space doing things differently than anybody else,” said Satyandra K. Gupta, robotics researcher at the University of Southern California, who teamed up on this project with John Gerdes, mechanical engineer from the U.S. Army Research Lab, and Hugh Bruck from the Mechanical Engineering Department at the University of Maryland, as well as several engineering students.

The team’s ultimate goal is to develop an alternative to the current Quadro-style drones that would be quieter and fly further and longer. But mimicking real birds is challenging.

For starters, all developers working on robotic birds, including members of this team, used a single actuator, or motor, to drive both wings simultaneously. “That limits what your bird can do,” Gupta said. 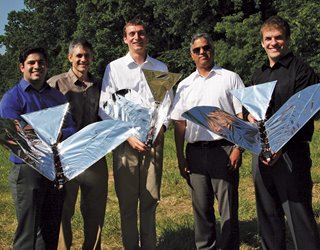 A team of mechanical engineers has been building a drone that mimics bird flight. Photo: University of Maryland and University of Southern California
Instead, engineers decided to have each wing driven by a different motor to enable complete programmability. This seemingly simple idea of flapping wings to generate thrust to propel forward and using the moving air to generate lift to stay afloat turned out to be quite a challenge, Gupta acknowledged. That’s because once the team put sophisticated control and actuation on the platform, the bird became heavier.

Many concepts that looked good on paper failed during flight tests, said Gupta, often damaging the robotic bird beyond repair, and slowing down the team’s progress.

The Robo Raven evolved through five main phases, while its designers were the first to demonstrate independent wing control, use of solar cell wings, autonomous dive control with a flapping wing drone, and the use of both wings and propellers to generate a significantly greater amount of thrust and maneuverability.

Robo Raven I: More than Flying 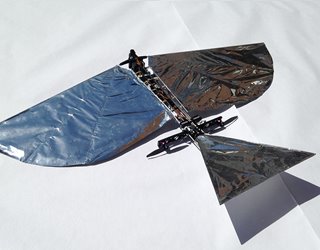 Robo Raven V can take off using propellers. Photo: University of Maryland and University of Southern California
In 2013, some seven years after the team started its work, a new generation of lightweight, high-powered, high-speed servomechanism packages that included a powerful motor, gears, and a controller became available. The device seemed promising as the pectoralis muscles for robotic birds.

Drawing on previous wings designs and utilizing 3D-printed lightweight parts, the team succeeded in designing a robotic bird with programmable independent wing control. Almost immediately, the drone could do aerobatics, back flips, rolls, and smoothly controlled glides, just as real ravens do.

“Then we found that our batteries were draining very quickly,” Gupta said. This required some complete system modeling to make sure the battery, motor, and brains were all working together properly. Despite being very pleased with their success, team members immediately began thinking about improvements.

This phase entailed a detailed look at how important components such as wings, motors, and the battery interacted. Each has performance properties relatively easy to understand independently but more difficult when put together as an interdependent system, Gupta noted.

For example, one common challenge for an unmanned aerial vehicle is to increase flight time. Installing a larger battery seems like an easy solution, but when the vehicle’s mass changes, the loads on the wings change, and there are implications for the motors as well. Many different models were built and tested to get the optimal balance of each component so that the whole system performance was optimized.

This also led to the design of a set of sensors to measure how each of the key components behave during a flight and subsequently to improve design changes.

Even with optimization of the wings to achieve the right balance between lift and thrust, flight time was still limited. Slightly larger wings are needed to improve lift for greater payload capacity, and smaller, more efficient wings are better longer flights. So engineers turned their attention to integrating flexible solar cells into the wings to enhance flight performance. 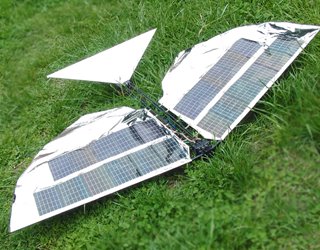 Robo Raven III was the first robotic bird to fly on batteries charged by onboard solar cells. Photo: University of Maryland and University of Southern California
This improved performance in three ways: Battery life was extended by energy from the sun; Wing properties were altered, leading to aerodynamics improvements because of stiffness of the material in the wings; The output of the solar cells was sensitive to thrust forces, enabling their use as sensors.

According to Gupta, this was a crucial step toward improving flight time. He envisions a future when a UAV can autonomously perch, charge up its batteries in the sun, and then continue flight.

Previously, Robo Raven had to be plugged in to be recharged. The batteries last 20 minutes without recharging, but now have the capability of continuous recharging by the sun.

Until this point, Robo Raven could fly only when remotely controlled, and this was challenging. The pilot had to manage many factors, including the wings’ flapping range and rate, tail angles, body orientation, and other parameters. So the team turned its attention to giving their bird a brain and a nervous system—an autopilot with sensors to measure the drone’s behavior in real time and automatically make adjustments.

This integration made the bird much more useful. For example, now a GPS coordinate could be uploaded, and Robo Raven would fly to that location and wait for further commands.

If the robot’s objective is to record video on the ground, Robo Raven could be directed to dive toward the target, allowing for a much clearer video than if the robotic bird is flapping its wings.

In the last phase, the team addressed another issue: The wings alone didn’t provide enough force for the bird to be aggressive in the air, speeding dramatically or climbing up fast.

Two thrusters placed on the back boosted its performance considerably. By taking advantage of this bimodal propulsion, Robo Raven V can perform tighter and more controlled aerobatics, carry heavier payloads, fly longer, and do more realistic soaring and gliding.

The End and a New Beginning

The engineering team considers the current family of Robo Raven platforms to be complete. But they are not finished by any means.

“We are exploring different directions,” Gupta said. Some students are excited about a soaring capability and others are interested in making them even more like a bird by making the wings retractable.

“There are lots of different things students would like to pursue, and we will be applying for research funding and to some extent the direction will depend on the funding,” Gupta said.