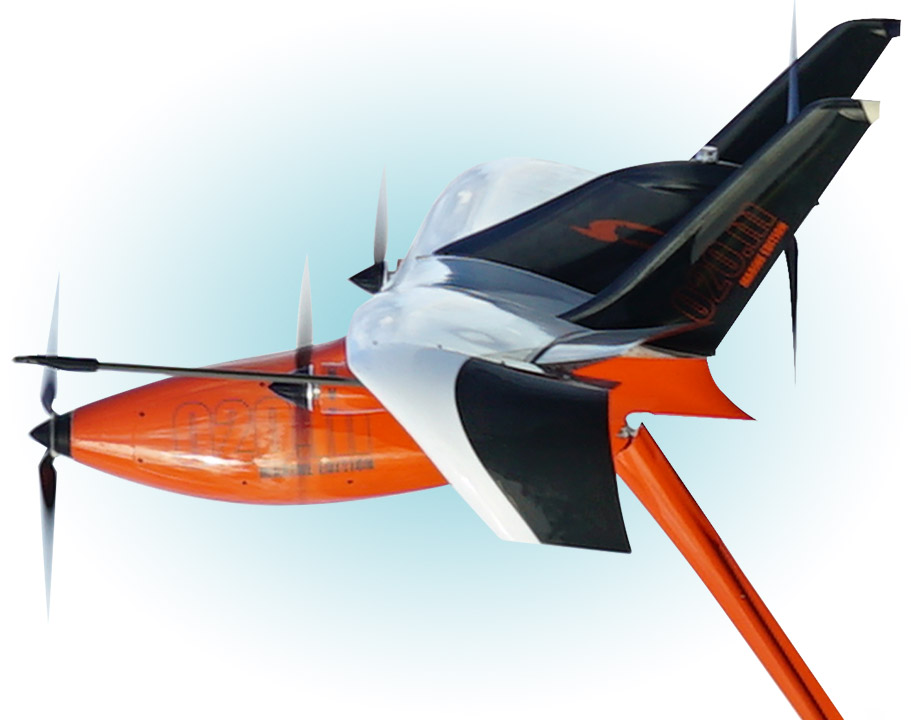 Pilots often refer to their aircraft as birds. With its ability to transition gracefully to horizontal flight, the new Swift021 vertical takeoff and landing drone from Swift Engineering certainly earns the name. Yet within this bird beats the soul of a race car.

The new Swift021 looks like an airplane with a stubby fuselage and long, wide, oversized wings. It begins every flight perched on stabilizers on the rear of its fuselage and wings.

Powered by four electric propeller motors, it climbs straight up. It can immediately drop its nose and transition to horizontal flight like an airplane or first rise above nearby power wires, trees, buildings, and other obstructions before going horizontal.

Its landings are more impressive. As it swoops into land, it pulls its body up like a bird, using the air resistance of the undersides of its wings to brake its forward motion. This brings it into a vertical position, from which it gently lands on the ground like a quadcopter.

Unlike most other airplane-like drones, the 021 does not require a catapult or rail to accelerate to takeoff speeds. Nor does it need a parachute or net to catch it when it lands.

While quadcopters can also take off and land vertically, the 021’s aerodynamics give the 30-lb drone exceptional performance. It has a 2-hour battery life with a 2-lb payload, 22-50 mph speeds, and a 45-mile range. It is designed to fly at 100 to 400 feet. 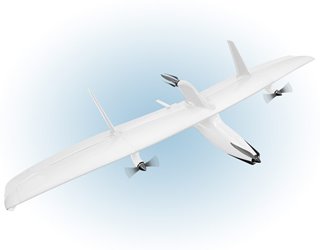 The Swift020 electric drone turns off front and aft fuselage propellers when cruising to extend battery life for up to 2 hours. Photo: Swift Engineering
This makes it ideal for inspections of often remote infrastructure, such as pipelines, oil wells, electrical transmission systems, and telecom towers. It could also be used to survey air quality, assess natural disasters, and help farmers locate herds or monitor crops. If operators see something suspicious, the 021 could transition to vertical flight and act as a helicopter to get a closer look.

One of the most surprising things about the 021 is not its design or performance, but its heritage. Unlike other drone firms, Swift Engineering started out as a company that designed and built racing cars.

That was back in 1983 when four engineers founded Swift Cars to build Formula Ford race cars. These are single-seat, open-wheeled vehicles that look like Formula I race cars, but are not as powerful or expensive.

“These are race cars that normal people can drive,” Andrew Streett, Swift’s vice president of technology and chief scientist, said. “The cost was reasonable enough that you could sell them to really good drivers and small business owners.”

After its first car, the DB-1 won the Formula Ford national championship in its first race, Swift could not make enough. The original owners sold the business, and in 1991 Hiro Matsushito, grandson of Panasonic’s founder and a race car driver himself, bought it.

Recommended for You: Are Hydraulics the Future of Heavy-Lift Drones? 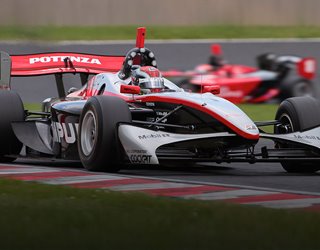 Swift Engineering has its roots in Formula racing. Shown here is a vehicle made for Formula Nissan racing in Japan. Photo: Swift Engineering
Swift became Matsushito’s passion project. He moved it into a giant 60,000-square-foot facility in San Clemente. At its heart was a rolling wind tunnel, a treadmill for cars that enabled realistic aerodynamic testing, one of only two in the United States at the time. During the 1990s, Swift began building cars for more advanced formula competitions.

Along the way, it attracted many top aerospace engineers and that made sense. Race cars were made of composite monocoque bodies that required the type of attention to strength and mass that went into aircraft designs. Engineers also needed an aerospace engineer’s understanding of structural mechanics, and also thermodynamics, vibration, and fluid dynamics.

Among those engineers was Mark Page, the father of the blended wing body, which smooths wings into the fuselage to avoid the drag created by the conventional junction of wing and fuselage. Streett joined the company after 10 years working on spacecraft, gliders, parachutes, and cameras for Predator drones.

They worked hard designing and building formula racers nine months of the year but had several months downtime between cycles. During a down period in 2001, one of those engineers used his free time to build a 4-ft blended wing drone.

Page jumped on it. It eventually morphed into the Killer Bee, a 136-lb drone with a 10-ft wingspan. Driven by a rear-mounted propeller, the triangular aircraft with wings that swept straight down at their ends could carry a 30-lb payload for up to 15 hours. It took only one or two people to operate and could launch in minutes.

“It was a really innovative platform,” Streett, who succeeded Paige as chief science officer, said. “We developed a launch platform that never existed before, launching it from a rail, and caught it in a net when it came down. We needed to find a net material and a tension member design that could capture a heavy bird going 40 to 80 mph to keep from stalling.”

The company later sold it to Northrop Grumman, which renamed it the Bat. The company also designed and built the 29-ft Eclipse Concept Jet, a four-seat business jet with a rear-mounted engine in seven months while working in secret.

“It had a unique V-tail in the back,” Streett said. “That was a design requirement from Eclipse. They wanted to make the aircraft appealing to the eye. They liked the look of race cars, and thought our company co understood aesthetics.”

Swift flight tested the aircraft the week before the air show where it premiered, and the company received hundreds of orders, Streett said. Unfortunately, Eclipse went out of business shortly afterward.

In 2013, Swift’s president, Rick Heise, wanted to move the company solidly into drones. He thought he could build a drone that would offer commercial markets some of the features found in the Killer Bee. These included runway independence, long-range, and small crews, and add electric power to the mix.

The company also invested in engineers who could make that vision a reality. That included mechanical and electrical engineers and also designers who could write code for autonomous aircraft. The result was the Swift020, which flew its first autonomous flight on July 2018, and, one year later, the Swift 021. 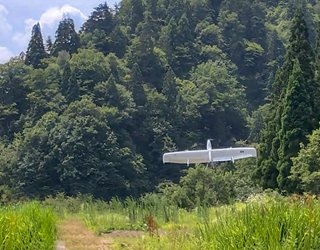 Swift drones can be used for inspection, where they can cover up to 45 miles and hover like a quadcopter if needed to get close up views. Photo: Swift Engineering
The 021 may have taken lessons from the Killer Bee, but other than the downturned winglets on the ends of its wings, which offer improved control in lightweight craft, the two aircraft do not look much alike. Where the blended wing body Bee looked like a stuffed triangle, the 021 resembles a traditional aircraft with a stubby fuselage and long, wide wings. It also has large rudder-like structures that rise above and below the backs of each wing to provide additional stability and a stable platform on which to land.

Like the Bee, the 021 has a rear-mounted propeller engine. It also has three forward-facing engines, one on the fuselage and two on the wing. All four engines are used for takeoff and landing. When cruising, the fuselage engines shut down to save battery power. The four engines also give the craft redundancy if an engine fails.

What really makes the 021 stand out is its ability to land like a quadcopter and quickly transition to more economical horizontal flight. This enables a single operator to drive to a location, unpack the 30-lb aircraft from a case, snap its eight parts together, and launch it from virtually anywhere within minutes.

To control the transition, the company created an autopilot system that could maintain stability even during the unstable transition from vertical to horizontal flight.

“From an engineering standpoint, we needed to get rid of the mechanical mechanisms used to transition between vertical and horizontal flight,” Streett said. “We could have tried to mash together a quadcopter with horizontal flight, but that would be draggy.”

Instead, Swift used broad wings to provide the lift needed for launch. By keeping the wing low and pulling up the aircraft as it landed, the same wing also provided the very high wind resistance needed for braking when landing vertically.

Its ability to land vertically lets it the 021 carry sensitive payloads, like hyperspectral cameras and a variety of sensors and electronics.

Streett was also very selective about choosing batteries. Swift had worked on NASA’s High-Altitude, Long-Endurance (HALE) remotely operated aircraft, which was designed to fly for weeks at a time.

“We have access to very high-energy-density batteries,” he said. “We know all suppliers and rated them on program level, so we were able to find a battery solution that meets our needs instead of a me-too solution.”

The result is a drone with outstanding range. It is, in fact, designed to operate beyond visual line of sight of the operator. The U.S. Federal Aviation Administration had prohibited all such operations until this past August when it OK’d the first BVLOS flight at the University of Alaska. Most observers believe it is only a matter of time before the FAA allows more exceptions or changes the rule entirely.

Meanwhile, the Swift021 is still capable of inspecting remote infrastructure, surveying air quality, and helping first responders assess natural disasters. In each case, its autonomous operation and bird-like takeoff and landing make it easy to deploy and use.

In fact, like affectionate pilots everywhere, Streett refers to his drone as a bird. And, he says, real birds seem to mistake it for one of their own.

“When we were testing the 020, we set it up on a barge,” he recalled. “As we were going through our safety checklist, a white crane landed right next to our bird. It seemed almost like it was trying to figure out if this was another bird or not. The very first time we took it up, it attracted a flock of seagulls that seemed concerned about territory issues.”

A surprising outcome for a bird with the heart of a racing car.