U.S. Can Learn From Texas’ Surge in Wind and Solar Power

U.S. Can Learn From Texas’ Surge in Wind and Solar Power 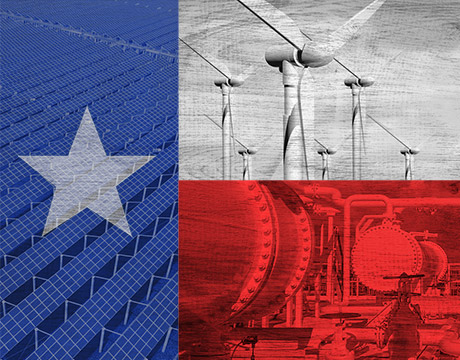 If you believe the stereotypes, then either you have a robust energy industry or you take sufficient action to stave off climate change. But you can’t do both. There is no middle ground.

Texas is a place where the conflict between the energy industry and climate change is sharply drawn. On the one hand, the state’s political leadership and much of its business establishment are ambivalent at best about the urgency to take action on the climate crisis. On the other, Hurricane Harvey caused more than $100 billion of damage, much of it borne by the energy sector.

But Texas isn’t just oilmen, and even oilmen won’t ignore opportunity when it appears. I believe the state can offer some useful insights about how the U.S. and the world can move forward.

In an era when carbon emissions didn’t matter, the Texas energy sector served as the engine of the national economy, getting rich selling hydrocarbons while encouraging our emissions of carbon dioxide. Simplistic thinking concludes that if we got rich taking carbon out of the ground and putting it into the atmosphere, then surely reducing carbon emissions will make us poor.

But that is wrong.

Looking ahead to an era where carbon power emissions do matter, Texas is poised to remain the capital of energy. West Texas, for instance, is among the most intensive energy hot spots in the world. The boom in oil and gas production in the Permian Basin there has led to a surge in investment: Permania, it’s called. If Texas were an independent country, it would be the second-largest gas producer in the world, after Russia.

But the sunbaked, windswept landscape of West Texas also explains why the region is experiencing a simultaneous surge in wind and solar power investment. With nearly 25 GW of installed nameplate capacity, Texas is by far the top state for installed wind power capacity. Just as a quarter of U.S. petroleum refining capacity is in Texas, a quarter of the nation’s wind power is in Texas.

Texas didn’t get its wind boom by accident. A state law passed in 1999 called for competition in the wholesale power market and a modest mandate to build renewable capacity. Deregulation caused a short-term spike in gas prices, but that invited competition from renewables, which became popular not only with Austin hippies but also corporate customers like Dell Computers, which placed orders for large batches of affordably priced green power to reduce costs and improve its sustainability profile. New electric transmission lines were put up, and wind turbines were built at such a rapid clip that there was a glut of wind power.

As the world chooses a path of decarbonization, the state’s vast expanses of cheap, flat, sunny, windy land and extensive reserves of natural gas trapped in shales means it can sell the low-carbon energy global consumers desire— whether that’s gas or wind or solar.

Even if officials in Washington make a great show of not caring about climate change, much of the world does care.

Unexpectedly for many observers, Texas oil and gas companies also care. They and other oil and gas companies like them have issued public statements affirming support for the Paris Climate Agreement (pledges adopted in December 2015 by practically every nation in the world to dramatically cut greenhouse gas emissions), hoping to sell the natural gas that will enable those reductions by displacing dirtier coal.

If Texas got rich when pollution didn’t matter, the thinking goes, it will get even richer when it does matter.

Our national political leaders have framed the energy dialogue as a battle between conservatives and liberals, Republicans and Democrats—even capitalists and communists. But the example offered by Texas-borne shale and wind booms makes clear that those battle lines are contrived. When Texans work together, we get great solutions. If we invest in our infrastructure, we enable affordable energy production. If we build our markets sensibly, we get the cleanest, cheapest, most reliable forms of energy.

As Texas goes, so can the nation. But it’s not clear that’s a lesson Washington, D.C., is ready to learn.

Michael E. Webber is the Josey Centennial Professor of Energy Resources at the University of Texas in Austin and Chief Science and Technology Officer at ENGIE, a global energy company headquartered in Paris. His latest book, “Power Trip: The Story of Energy,” will be published in May by Basic Books.

More Exclusive Content from ASME.org:
Manufacturing Takes Flight
The Critical Need for 5G Cellular Service
How Engineers Can Resolve Conflict and Save Their Business Article
Infographic: Shifting Sources of the US Power Grid
According to the 2018 Wind Technologies Market Report, published by the Office of Energy Efficiency and Renewable Energy, the United States added 258 GW of generating capacity from 2009 to 2018, with 41 percent of that total coming from natural gas-fired power plants, 28 percent from wind, and 20 percent from solar power.