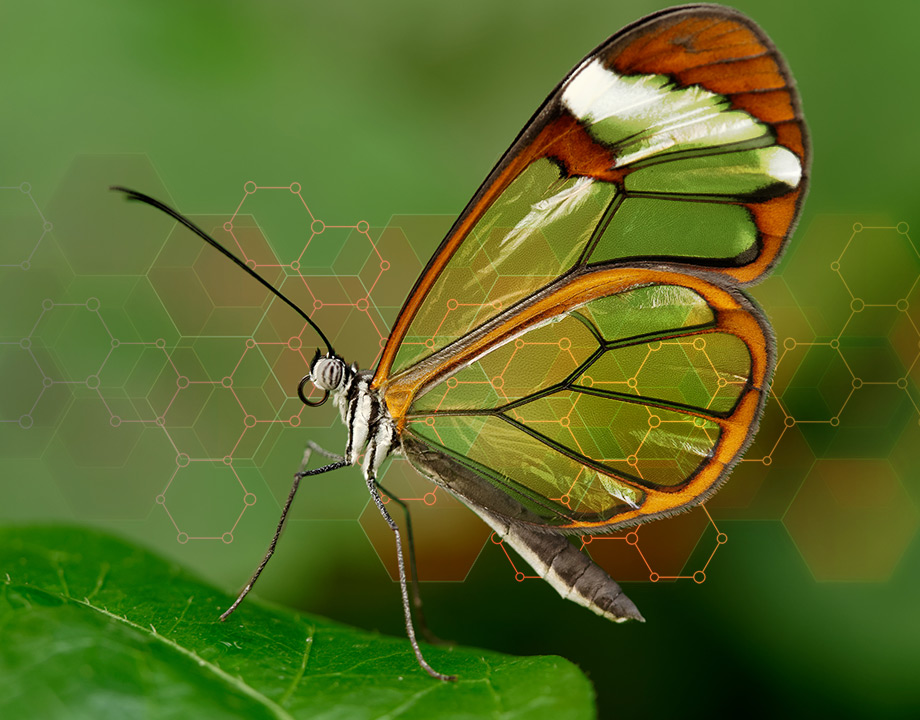 The ideal glass—for screens, windows, eyeglasses, or solar cells—is completely transparent, won’t fog up, and sheds dirt. It’s hard to get all three qualities at the same time, though. Add one, and you reduce the other.

Now researchers at the University of Pittsburgh’s Swanson School of Engineering have achieved this ideal by turning to the glasswinged butterfly, also known as Greta oto. That species of butterfly sports wings that are highly transparent but with low reflectivity. 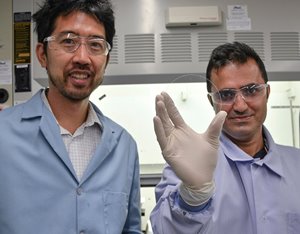 Paul Leu (left) and Sajad Haghanifar have developed a glass that’s durable, clear, anti-fogging, and liquid resistant. Photo: Maggie Pavlick, University of Pittsburgh
The key to creating these qualities is the nanostructures within the wings. “They are smaller than the wavelength of light,” said Paul Leu, an engineering professor at the university, whose lab conducted the research. “They interact with the light in a more effective way, where the light is not bouncing off the structures like you normally see for larger structures.”

The lab’s new glass is 99.5 percent transparent (much clearer than most window glass) as well as superomniphobic—it repels water, oil, and other liquids. It’s also antifogging and self-healing.

It isn’t just the size of the nanostructures that gives rise to this host of properties. It’s also their randomness and shape. “You could say they were little pillars,” Leu said.

While the structures sprout spontaneous on the butterfly wings, producing them on glass required several steps: Reactive ion etching is followed by a plasma enhanced chemical vapor deposition and a surface treatment with fluorination.

Leu and his colleagues reduced their design and testing cycle with the help of machine learning.

“The glasswing butterfly’s wing is a natural surface—it exists in nature, but that doesn’t necessarily tell us how to create this synthetic surface in glass,” Leu said. “It gives us some guidance as to the kinds of structure to make, but because it’s random we don’t know how to go about this. So the machine learning provided guidance that allowed us to mimic properties that the glasswing butterfly has.”

Further Reading: Why We Have Eyelashes

Leu and his colleague’s durable antifogging superomniphobic supertransmissive and superclear nanostructured glass prototype is a circular wafer four inches in diameter. Increasing the size to something that could be used as a computer screen or a window is the next challenge they face.

“For fabrication of this structure you need a vacuum. It’s very difficult to have a large chamber with a vacuum,” said Sajad Haghanifar, a doctoral candidate and the lead author of this research project. “The chamber we are using has a maximum size of 12 inches. Larger vacuums mean higher costs. But we are trying to figure out other ways to create the structure without a vacuum.”

The current small size is not the only limitation to the commercial success of their glass. It also has to be a good deal tougher. For an abrasion test, Leu and Haghanifar scrubbed their glass with a Scotch Brite sponge. They found that any scratching could be fixed with the self-healing aspect of the glass: just heat it up for 15 minutes and the nanostructures return.

But when Corning, the glass-making company, called Pitt engineers, they learned that the glass would have to stand up to greater abuse. “They want to take steel wool and abrade the surface for 5,000 or 10,000 cycles and still have the same properties,” Leu said. “That’s the big challenge.”

Should they meet this challenge we’ll have glass that is not just cleaner and clearer to look through. Greater transparency will mean phones and tablets won’t have to use as much energy to achieve the same brightness. And solar cells will get to convert all the sunlight that hits them, not just the rays that make it through accumulated grime.

But first the glass has to survive that steel wool pad.