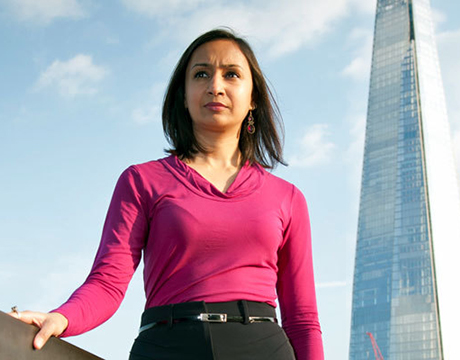 Roma Agrawal talks about her new book and the need for a diversified engineering workforce. Photo Credit: Nicola Evans, WSP

Building the Case for a Diversified Engineering Workforce

Roma Agrawal is a structural engineer and the author of the new book Built: The Hidden Stories Behind our Structures. During her 10-year career, she has designed bridges, skyscrapers, and sculptures. When she’s not designing, Agrawal spends much of her time promoting engineering careers to young people, especially women. Agrawal recently spoke with Jeff O’Heir about her book and the need for a wide representation of cultures and views in engineering. For the full interview, please tune into our new podcast, "ASME TechCast," brought to you by the editors of ASME.org and Mechanical Engineering magazine.This is an edited version of that interview.

JO: You’ve mentioned in the past that roughly 50% more graduates are needed in science and engineering to meet the needs of the engineering economy. Is that still the case today?

JO: Why does that shortage persist?

RA: I don’t think there’s a very clear answer, because we would have solved it if we knew exactly what the problem is. But for me, I think it comes down to the awareness of engineering as a career, the fact that we’re not really out there in the public domain. When children watch TV, they’ll see doctors and lawyers and professions like that. But I don’t think people really understand what engineers do and the fact that engineers can be a huge, amazing, different range of people.

JO: While women receive roughly 20 percent of undergraduate engineering degrees, they represent only about 13 percent of the engineering workforce. Based on what you’ve seen in the workplace and in the field, why do you think that number is still so low?

RA: There’s a problem with attracting women to engineering in the first place. But then there’s a larger proportion of women undergraduates who decide to pursue different careers other than engineering, even with an engineering degree, when compared to men.

RA: I don’t think it’s outright discrimination, necessarily, but I think the way engineering jobs and careers are marketed to young people needs to change. It’s probably quite outdated and might not really appeal to young people in general, particularly women. Then there’s the retention problem. Women drop out of the workforce at much larger rates than men do. Predictably, it’s around the time women are having children.

RA: I think it’s really important that people who are designing things for other people, for society, should reflect society. So it’s not just women. I’m keen to see more people from ethnic minority backgrounds. In the UK, only about 6 percent of engineers are from ethnic minority backgrounds, but in our population it’s more than double that. Disabilities, mental health, sexual orientation; all of these things are incredibly important because they are designing for society so we must reflect for society.

JO: Several of the reasons why anyone who’s interested in engineering should pursue a career in it are found in your new book, Built. What type of audience did you write the book for?

RA: My book is for everyone. Anyone who’s got a little curiosity about the buildings that they live in, the bridges that they walk across, or even what’s happening under their feet is the ideal audience. The whole point of the book is to appeal to people who are not engineers. Having said that, a lot of engineers have also said to me that they really enjoyed my book because of the stories, because of the fact that I’ve done all this research on the history of engineering and materials; and the human beings that I’ve actually put in there.

Read More:
The Impact of Tariffs on Engineering
Replicating the Ideal Gait Guides Design of New Prosthetic Foot
The Comeback of the Aluminum Can

My book is for everyone. Anyone who’s got a little curiosity about the buildings that they live in, the bridges that they walk across, or even what’s happening under their feet is the ideal audience.Roma Agrawal