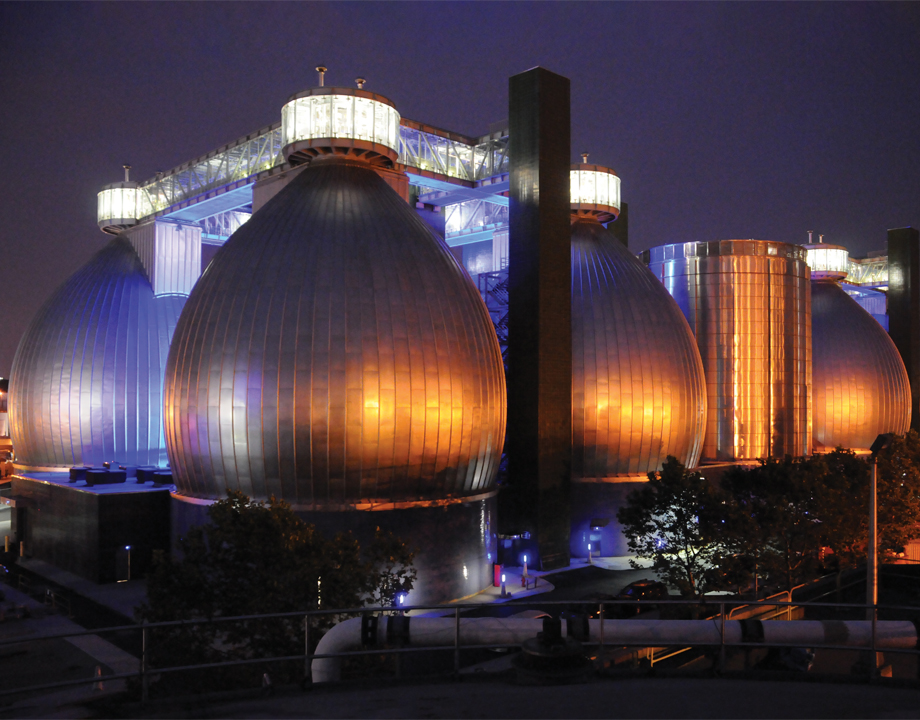 To reduce the volume of waste from a million people, a digester at the Newtown Creek facility in Brooklyn turns biosolids into biofuel. Photo: NYC Department of Environmental Protection

Biofuel Made in New York

I am standing on the top of an over 10-story-high sewage tower, peering into it through a round glass-covered hole. Inside, it’s all pitch black save for a few discernible dark waves that occasionally roll across the surface like splashing ocean tides. Arguably, the panoramic view of Brooklyn that I can enjoy from the rooftop of New York City’s Newtown Creek Wastewater Treatment Plant is far prettier, but the sewage spectacle is more interesting—getting a tour of sanitation facilities is a rare, albeit a smelly, treat. Around these glass-covered holes, black air vents puff out warm vapor smelling of ammonia, sulfur, and other pungent odors bad enough to pinch your nose. The whitish whiffs rise in the cold winter air like vestiges of a latent volcano or a breath of some sleeping mystical beast. The latter is an apt comparison because beneath my feet there’s a living creature—the trillions of bacteria eating through sewage and exhaling—or perhaps passing—the disagreeable gases.

New York City has 14 sewage plants that cumulatively clean up and process 1.8 billion gallons of wastewater a day. The largest of them all, Newtown Creek, contributes about 350 million gallons daily, but can double that in heavy rains. It is the city’s most advanced, modern, state-of-the-art wastewater treatment facility, taking 10 years and $5 billion to build—or rather to rebuild the old, outdated one. Known for its futuristic gleaming silvery silos with egg-shaped towers it is also the city’s most beautiful and architecturally impressive sewage processing location, and even a landmark.

The glass-enclosed walkway that connects the eggs’ shimmering pinnacles also offers a bird’s-eye view of the surrounding Greenpoint neighborhood. But these head-turning, egg-shaped tops aren’t just for show. Those eight digester towers seamlessly convert part of New York City’s sewage into biogas and a dirt-like output, similar to how Mother Nature would do it. At 145 feet high and 80 feet in diameter, each egg holds about 3 million gallons of sludge, converting it into 2 million cubic feet of gas every day. Sanitation engineers from all over the world come to visit the Newtown Creek plant and implement similar set up back home, said Zainool Ali, the plant’s superintendent. 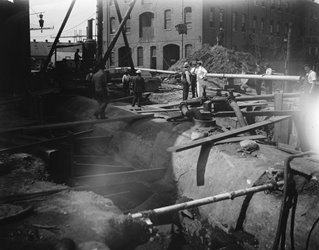 Workers construct an extension of a sewer line near the New York Navy Yard in Brooklyn in 1909. Photo: The National Archives
New York’s sewage system has gone a long way since it was first built in the 1800s. Originally laid in the flatlands of Brooklyn, it was one of the earliest in the country, built after cholera epidemics in 1832 and 1849. Modelling after the work of their British counterparts, the New York City engineers built the combined sewage system, in which stormwater and toilet output flow into the same set of pipes.

The aftermath of these decisions still persists today: During heavy downpours, which are common in New York, the sewage system overflows, spilling some untreated wastewater into the sea, and then the beaches display warnings to keep the bathers away for a few days. To remediate that, in the recent years the city built many additional water catchments to store the temporary surplus of rainwater rather than let it rush into the ocean.

Aside from the accidental storm overflows, the effluent that’s finally released from New York City treatment facilities is clean enough to drink—Ali sipped some from a sampling bottle to prove it. That wasn’t true when the system was originally built.

When the pipes were first laid in the 1800s, the outflow was simply dumped into the sea. But then New York Harbor began to stink. As the city’s population grew, so did the outflow, which began to affect the beaches and the oyster beds. Studies found some dead spots in the ocean where the water was so devoid of oxygen, it had no marine life left, which prompted the start of the treatment era around the 1890s. The Coney Island plant, equipped with treatment faculties to protect the famous beach and amusement park nearby, was one of the early adopters of that technology, said Dimitrios Katehis, director for regulatory compliance, strategy, and innovation at the New York City Department of Environmental Protection. 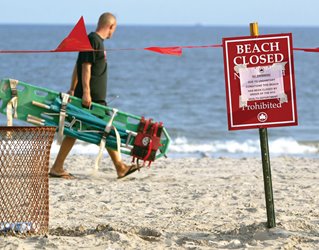 A lifeguard walks down an empty Coney Island beach closed by city health officials after a wastewater treatment plant dumped millions of gallons of raw sewage during a blackout. Photo: Mario Tama/Getty Images
The sea remained the waste’s final destination for a nearly a century, until the Clean Water Act of 1972 forced cities to clean up their act. Today, the New York City sludge is dewatered and treated for pathogens, ultimately becoming a landfill cover, assuring that the city garbage doesn’t reek, Ali said. And at the Newtown Creek Wastewater Treatment Plant, the state-of-the-art egg-shaped digesters also extract biogas from that sludge before it goes to landfill.

Generating gas from excrement, whether human or animal, is not a new thing. In the 1800s, Louis Pasteur generated biogas from horse manure and proposed to use it in streetlamps to keep Paris lit at night. At the time, the city was covered with manure from all the horses that lived there, so Pasteur’s idea would solve two problems—clean up the city and put all the dung to good use.

The idea took hold. Germany built the first biogas-producing wastewater treatment plant in the early 20th century. After that, the technology quickly spread from Europe to Asia. In China, biogas plants were first built by affluent families in the 1940s. India began building simple biogas plants for rural households in the 1950s. In Germany, biogas technology adoption was driven by the country’s need for alternative energy sources in a war-torn economy. In India and China there was strong government support for biogas production as cheap sources of energy, especially in rural locales.

Cheap oil prices of the mid-20th century dampened the world’s interest in biogas technology. However, following the oil crises of the 1970s, it gained more interest again. Right now, over one million biogas plants exist in India. In China’s rural areas, more than 20 million people rely on biogas produced by over five million small digesters.

We are simply rediscovering the wisdom of generations of engineers who had it all before. And the biology involved in biogas production is both beautifully simple and tantalizingly complex.


Biogas technology appears simple, but the actual inner workings of a digester are a complex, multi-phased, and tightly interconnected biological process involving numerous bacterial species that thrive in the anaerobic conditions, meaning without oxygen. They feed on the undigested nutrients in the sludge, breaking them down much like the bacteria in our own guts—hence the name “biodigester.” Some of them are harmless: Among the “good guys” are the well-known probiotics such as Lactobacillus that improves digestion and Bifidobacterium that actually fights Escherichia coli (or E. coli). Others are quite dangerous. They include Clostridium, Bacillus, Staphylococcus, Streptococcus, Pseudomonas, Actinomyces, and E. coli, all of which have pathogenic strains.

This bacterial menagerie facilitates the anaerobic digestion, breaking the organic matter into simpler chemical compounds and biogas, which mainly consist of methane, carbon dioxide, and some other gases. It is a chain of reactions that involves complex organic and inorganic chemistry, which scientific literature breaks down into three steps—or something even into four, because one of the steps can be split into two parts.

The very first step sludge goes through is hydrolysis. During this step, large organic molecules dissolved in water—starches, cellulose, proteins, and fats—are decomposed by acid-producing bacteria into smaller compounds. Using specific hydrolytic enzymes, some of which are present in our own stomachs—like amylase and lipase—the acidogenic bacteria break down proteins into lipids and amino acids, and complex sugars into simple ones.

The digester’s bacterial communities are highly interdependent. Some of them produce compounds used by their neighbors. Some consume products that harm other species.

For example, methanogens, without which biogas won't form, dislike oxygen—it’s toxic for them. Even though digesters are anaerobic, some chemical reactions that happen inside them release oxygen, a surplus of which can poison methanogens, which will die out instead of producing methane. The reason methanogens survive and thrive is because the acid-producing bacteria create a favorable environment for them. To produce acetic acid, acidogenic bugs need carbon and oxygen, which they source from water as dissolved oxygen or wrestle it out of other compounds, assuring that there’s no free-floating oxygen in the digester. 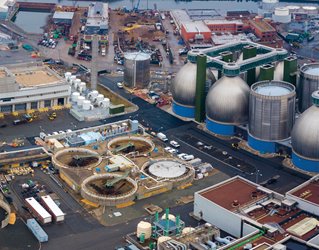 Beyond the iconic biodigester eggs (right), the Newtown Creek Wastewater Treatment Plant sprawls along the Brooklyn waterfront. Photo: NYC DEP
In a way, methanogens return the favor. The acetogenic bacteria don't do well in the hydrogen-saturated environment they produce. A waste product of the acetogenic bacteria, hydrogen would essentially choke them to death. But methanogens solve this problem by gobbling up hydrogen and fusing it into methane, balancing out the system.

This overall digestive balance is very important. When either species produce too many waste products, they start to die out. To avoid these stagnant zones, it’s best to have all species well mixed. Some literature recommends “agitating” the digester—mechanically mixing the contents. That’s the reason for the mysterious “dark waves” I saw through the glass at Newtown Creek. Made by some inner machinery, the waves were mixing the microbes.

In a well-mixed digester these reactions can go on continuously, similar to what happens in nature with swamps and marshes. And that is one beauty of the digester reactor—once you get it started, it can essentially keep going forever, with the bacteria happily passing their gases for human collection.

Alternatives to Natural Gas: What are Electrofuels?

Serving about 1 million people, the Newtown Creek plant gathers about 2 million cubic feet of that gas daily. To put it in perspective, 1,000 cubic feet of natural gas is roughly enough to run an average American home, including heat, hot water, and cooking for four days.

One would think that New York’s 9 million residents would be a financial boon, but it’s trickier than it seems. Coming out of the digesters, biogas is a mixture of methane and some “impurities”—for example, sulfur, which is a health hazard and an environmental contaminant. These impurities must be removed before it can flow into the pipelines, and that requires building a purification plant. For now, Newtown Creek burns its biogas to keep the digesters warm and the microbes alive and comfy—and flares the rest. It’s working with Con Edison on purification.

For More by Lina Zeldovich: Universities Look to Re-engineer Education

Ali said that after testing, Con Edison, in fact, found Newtown Creek’s biogas to be “almost pipeline quality,” but it still needs to be purified. The company built a pilot gas cleaning plant, and it worked.

As a parallel effort, the New York City Department of
Environmental Protection is investigating ways of making biogas production more efficient. For example, adding food scraps into the mix is known to boost biogas production, so tossing city restaurants’ leftovers into the digesters is one idea for experimentation. This would also help divert the city’s organic food waste from landfills to the treatment plants, where it could be broken down and used to produce biogas and biosolids.

In the meantime, Con Edison is planning to build a full-scale gas plant next to the towering digester eggs—but like everything else done on a grand scale, it will take time.

Lina Zeldovich is a science and technology writer in Woodside, N.Y.

This article is adapted from the book, The Other Dark Matter: The Science and Business of Turning Waste into Wealth and Health, by Lina Zeldovich, published by the University of Chicago Press. Copyright ©2021 by Lina Zeldovich. All rights reserved. Zeldovich also posts on Twitter: @LinaZeldovich.