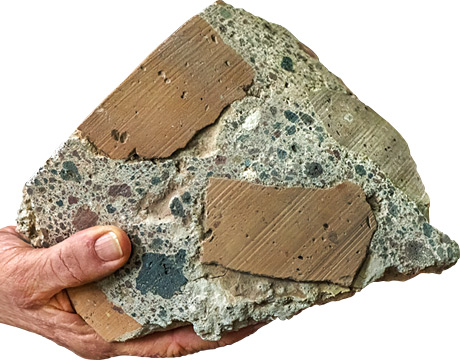 Roman structures still stand—buildings, bridges, arches, roads, piers, and breakwaters—thanks in large part to the concrete and mortar that the Roman engineers designed. Amazingly, even in corrosive saltwater environments, Roman concrete harbor structures have remained strong and intact for more than 2,000 years.

Romans made concrete by combining lime with volcanic ash to make a mortar and then mixing in fragments of volcanic rock (the aggregate). This material was used to build many impressive structures, including the Pantheon and Trajan’s Markets in Rome, as well as large-scale piers and breakwaters along the coastline designed to protect busy shipping harbors.

Compare this spectacular longevity to modern-day Portland cement, which, even when reinforced with rebar, might last 100 years in a marine environment.

So what did the Romans know that we don’t?

To find out, researchers from Lawrence Berkeley National Laboratory (Berkeley Lab) and the University of Utah analyzed samples of Roman concrete from harbor structures in Italy at Berkeley Lab's Advanced Light Source (ALS). Their findings were recently published in American Mineralogist.

The researchers, led by Marie Jackson, a professor of geology and geophysics at the University of Utah, examined thin sections of the concrete under an electron microscope to map the distribution of minerals. They also used X-ray microdiffraction methods to learn more about the chemistry and structure of the minerals occupying the microfractures. X-ray microdiffraction measures an average signal from many tiny mineral grains, providing high resolution and fast data collection.

“We can go into the tiny natural laboratories in the concrete, map the minerals that are present, the succession of the crystals that occur, and their crystallographic properties,” said Jackson.

The team was surprised to discover high concentrations of zeolite, phillipsite, and tobermorite occupying the porous spaces in the concrete, many of them created by the dissolution of other minerals, such as feldspar.

Jackson theorizes that the steady percolation of seawater into the Roman concrete reacted with the lime and the volcanic ash to create these interlocking minerals that occupied void space, making the concrete stronger. The long, plate-like crystals of tobermorite also created an unusual flexibility within the submerged concrete that increased with time.

In contrast, anti-corrosive Portland cement mixes are formulated to be inert and unreactive with seawater, yet start to deteriorate far earlier.

“Contrary to the principles of modern cement-based concrete,” Jackson said, “the Romans created a rock-like concrete that thrives in open chemical exchange with seawater.”

Jackson has searched ancient Roman records for the formula to this concrete with no success. The exact formula remains unknown. However, Jackson’s team is experimenting with different combinations of seawater and volcanic ash to make a modern-day concrete with these unique properties. It is possible, too, that fly ash—a problematic byproduct of coal-burning—could be a worthy substitute for the volcanic ash component, which would be an immense environmental benefit.

A modern equivalent of Roman concrete would be ideal for seawall structures and other marine applications, as well as for encasing high-level wastes in cement-like barriers that protect the surrounding environment. Widespread use of this concrete would also reduce the construction industry’s dependence on Portland cement, the manufacture of which requires high-temperature kilns that emit significant amounts of carbon dioxide.

However, added Jackson, before Roman concrete recipes can be widely accepted by industry, test structures must be built and evaluated long-term to see how they perform compared to similar structures built from steel-reinforced Portland cement.

“I think people don’t really know how to think about a material that doesn’t have steel reinforcement,” Jackson said. Mark Crawford is an independent writer.

For Further Discussion
Contrary to the principles of modern cement-based concrete, the Romans created a rock-like concrete that thrives in open chemical exchange with seawater.Prof. Marie Jackson, University of Utah