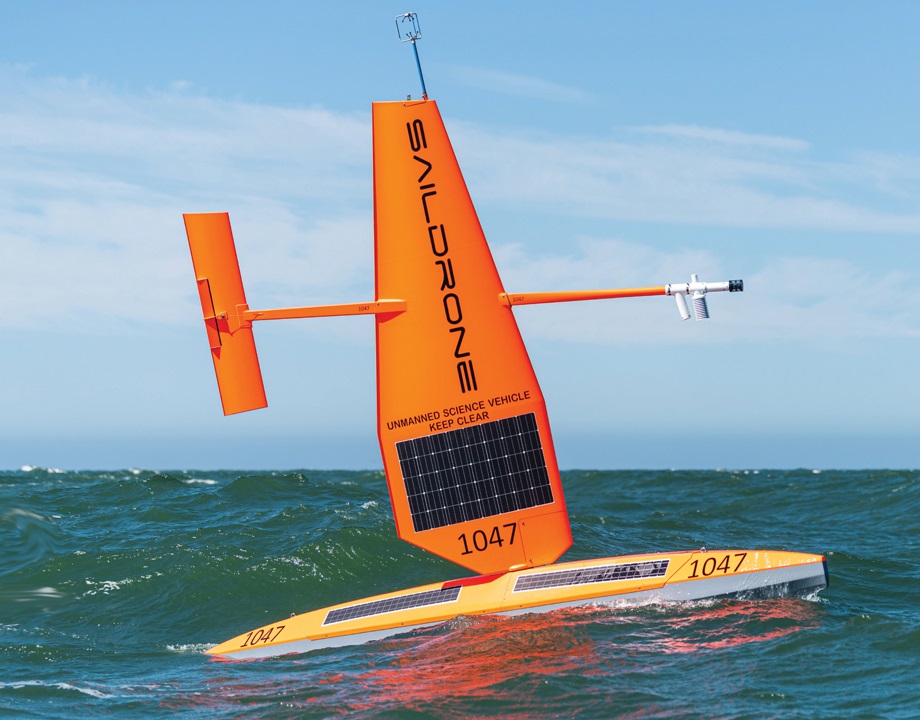 Saildrone plies the ocean with sails and without a crew. Photo: Saildrone

Whether tethered or autonomous, most ocean-going drones have one thing in common: They operate beneath the surface. Saildrone is different. As the name suggests, its kayak-shaped hull is fitted with a sail and spar and bolstered with solar panels and artificial intelligence to navigate the surface of the ocean by itself.

The alternative design has proven robust and successful. The National Oceanic and Atmospheric Administration and other government agencies are using the Saildrone design for lengthy marine data gathering missions, and one became the first uncrewed vessel to successfully circumnavigate Antarctica.

The results come after years of development based on CEO Richard Jenkins’ design of sail-driven vehicle that broke the world’s land speed record. It includes a tall, hard wing, a longitudinal spar and a vertical tail. A trim tab on the tail adjusts the sail angle to the wind. The design powers three classes of saildrones: the Explorer is 23 feet long, the Voyager is 33 feet long; and the Surveyor is 72 feet long.

Jenkins said the vessels fill a lower-cost niche in deep ocean exploration that can be very expensive. Chartering a ship can cost some $35,000 per day and yield scientific information from the route of the ship. A saildrone does the job for less money and can stay at sea for up to one year.

“it’s at a point where this is a very, very highly evolved, very mature design that can survive up to twelve months at sea without service,” he said. “Any sailor will tell you that every day on a voyage, you’re always fixing something. So to have a vehicle that can leave the dock, transit thousands of miles for well over six months and sail home without any servicing at all is a phenomenal achievement from an engineering perspective.”

Propelled by the wind, the larger vessels can be augmented with diesel, although the load of fuel carried is very small. Solar panels power scientific instruments and equipment. All vessels are monitored on their voyages via satellite, but they operate independently through the course of their travels.

The hulls are made of composite fiber although the largest of the saildrone fleet, the Surveyor, is being made of metal. Fiber “is not the most economical way to scale up,” said Jenkins, adding that the larger vessels will be manufactured in a shipyard. “The hull and keel are pretty standard maritime engineering.”

More for You: Plying the Depths of the Ocean

The vessels are designed to right themselves in rough seas, with onboard sensors constantly measuring stability and automatically correcting. “We understand the angle, the altitude of the sensors and then we motion correct every measurement,” he said. “They take and correct measurements about 20 times per second.”

Saildrones are used for a wide range of nautical missions, including oceanic scientific monitoring, assessing fish populations, and police and military uses. To do the job properly, the company built out a data set that now is considered the world’s largest collection of maritime action images on which to program its AI capabilities.

“People look at us as a hardware company,” said Jenkins. “Actually we have a hardware layer that underpins a data company.”