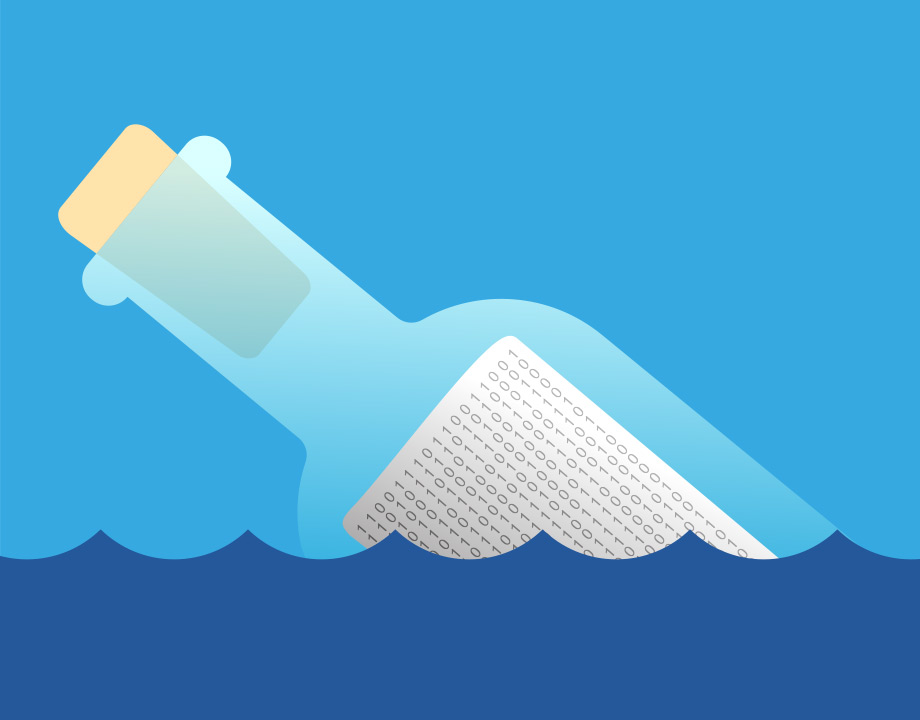 Some of the world’s biggest mysteries lie in the ocean’s depths. Now, new technology is helping humans to dive deeper, autonomously map and explore the seafloor, and discover new shipwrecks.

There are some well-known facts that spring to mind when one hears the word “shipwreck”:

That there are over three million shipwrecks on the seabed, according to a conservative estimation from UNESCO, the United Nations cultural, scientific, and education arm that is tasked with protecting the underwater cultural heritage, including shipwrecks, wreck barriers, and aircraft wrecks.

That less than 1 percent of them have been explored. Even those that have been located are often not surveyed nor visited by divers due to the lack of resources and time. Most of the planet’s oceans remain unexplored, and those millions of undiscovered wrecks are far beneath the surface. 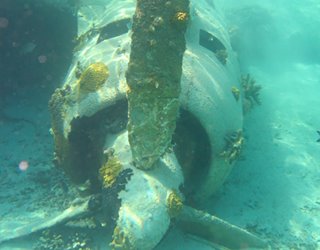 Airplane wreck near the Bahamas. Photo: WikiCommons/UNESCO
That ships, and later aircraft, have been sinking and disappearing in the ocean depths throughout human history; The world’s oldest known boat, called the Pesse canoe, is 10,000 years old, and while it didn’t sink, there’s no knowing how many others did.

That they contain treasures—gold, silver, jewels, and so on—worth billions of dollars. And that shipwrecks offer valuable and well-preserved historical information, and really are priceless.

Recommended for You: Sailing Toward Autonomy: Future of Self-Driving Cargo Ships

Shipwreck discovery starts with historical research, which is now aided with big data and AI-powered re-navigation software to trace the lost ship’s journey. Then on to mapping the seabed that is now done with state-of-the-art sonars and confirmed with cameras on autonomous underwater (AUV) and remotely operated vehicles (ROV). Salvage operations and marine archeological activities come last.

Some wrecks are removed because they pose a navigational obstacle or an environmental danger; others are studied and preserved for their historical and educational value.


1. AI and a Roman Shipwreck


In December 2019, archeologists from the University of Patras in Greece used AI to process images collected during reconnaissance surveys and discovered a 2,000-year-old Roman ship. The 110-foot ship, named Fiskardo after the nearby ancient Roman port, still holds 6,000 amphorae in remarkably good shape for their age, according to historians. 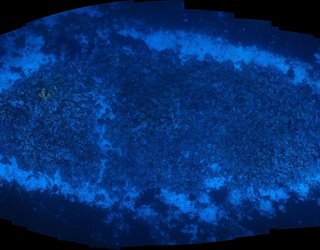 The sonar image of the 2000-year-old Roman shipwreck. Photo: Ionian Aquarium, Greece
Classical-era shipwrecks lie at the seabed and are often hidden by centuries of natural growth, so they can be difficult to discern with a sonar. Researchers explored the seafloor using a side-scan sonar, a commonly used method that sends pulses of sound sub-horizontally across the sea. AI then analyzed and classified the captured images to determine which textures could correspond to a shipwreck.

Marine archeologists confirmed their findings by sending divers and ROVs to the potential site to capture high-resolution images of the ship and its cargo. The team and their AI method have also found three almost intact World War II wrecks.


Canadian marine archeologists have discovered two shipwrecks from the tragic British explorer Sir John Franklin’s expedition. One hundred seventy-five years ago, he set to find the Northwest Passage from the Atlantic Ocean to the Pacific and vanished in the Canadian Arctic. Parks Canada and its Inuit partners have been studying the two ships, Terror and Erebus, since discovering them in 2016 and 2014, respectfully, in Victoria Strait. 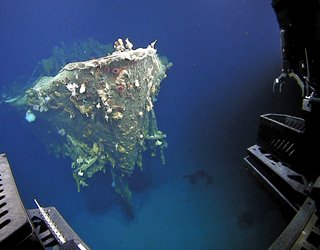 Remotely operated vehicle approaches the bow of a sunken ship. Photo: NOAA Office of Ocean Exploration and Research
The bay is covered in ice nearly all year round, so historians have only a few weeks per year to study the ships. This past summer, divers and a Deep Trekker DTG3 ROV explored Terror for the first time. The ROV provided live 4K footage to the team at the surface and provided divers with an extra set of eyes over seven dives that explored 20 cabins of the ship. The vehicle is about the size of a basketball and can fit into small spaces, so divers guided it below deck to produce images of plates neatly stacked on shelves, rifles hanging on the walls, and drawers in dressers and desks still tightly shut.

The team has also used a larger ROV, Saab Seaeye Falcon, that can dive even deeper to 300 meters and carries a bigger HD camera and a sector scanning sonar system.


3. AUVs and a Missing Submarine


Ocean Infinity’s ship Seabed Constructor located the ARA San Juan, an Argentinian submarine lost in November 2017 with everyone on board. A year later, the Texas-based mapping and seabed exploration company used five AUVs to find the wreckage in a ravine about 3,000 feet below the surface of the Atlantic Ocean. 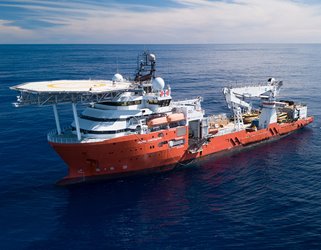 Seabed Constructor, equipped with a fleet of AUVs and ROVs, located an Argentinian submarine lost in 2017. Photo: Ocean Infinity
The Hugin AUVs are not tethered to their host vessel during operations, allowing them to go deeper—down to 6,000 meters—and collect higher quality sonar data. The search was complicated by the underwater terrain of submarine-sized and shaped rocks, trenches, and a steep drop-off the continental shelf, and wouldn’t be possible without sending AUVs to take a closer look at potential sites.

In addition to their fleet of AUVs equipped with multibeam sonar systems swimming abreast and connected to surface drones, the search team aboard the Seabed Constructor also used an ROV for live video and images of the site.


Multidisciplinary research teams consisting of marine archeologists, biologists, and engineers from the Norwegian University of Science and Technology (NTNU) study sensing technologies that can help scientists to collect new information from the ocean depths. They deploy AUVs, ROVs, and unmanned surface vehicles with a range of new acoustic and optical sensors. 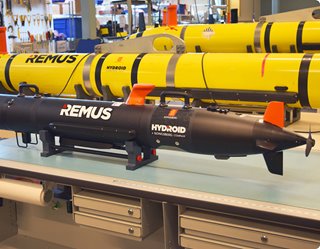 Autonomous underwater vehicles are continuously evolving to dive deeper and explore for longer and better. Photo: Hydroid
Instead of the traditionally used side-scan sonar towed behind a surface vehicle for surveying, Norwegian researchers have been testing synthetic aperture sonar (SAS) technology, a high-resolution acoustic sensor that provides more detailed images without the need to send divers or cameras to possible wreck sites.

They have also been equipping their ROVs with stereo cameras that create high-resolution 3D models of wrecks using photogrammetry. NTNU teams, led by marine archeologist Øyvind Ødegård, have been using underwater robots with smart sensors to search for wrecks of the 17th-century whaling ships that sunk in hundreds in northern Europe. One of their discoveries has been the world’s northernmost mapped shipwreck in Isfjorden, a fjord in Spitsbergen.


Over the past few years, the crew of R/V Petrel, a research vessel owned by Paul G. Allen, has discovered over 30 sunken warships, including the USS Indianapolis, the World War II cruiser that was sunk by a Japanese torpedo and was the greatest single loss of life at sea in the history of the U.S. Navy. 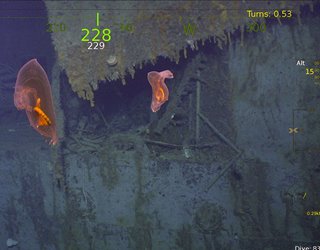 Swimming sea cucumbers at the site of the USS Helena, discovered nearly 3,000 feet below the surface near Papua New Guinea. Photo: R/V Petrel
The wreck was located at a depth of 18,000 feet in the Philippine Sea. Petrel used the Hydroid Remus 6000, an AUV that is capable of reaching extreme depths of four miles with pressures of 9,000 pounds per square inch. USS Indianapolis mission also involved a search across 600 square miles of the supposed wreck site. Each mission lasted about 20 hours, as the AUV had to reach the seafloor, search the area with a side-scan sonar, and then return to the surface.

When the sonar images from the AUV revealed candidates for the sunken ship, the second robot, a custom-made BXL 79, an 80-kW ROV, dived to capture the findings on live video.


In January 2012, the Italian cruise ship Costa Concordia ran aground and overturned off the coast of Tuscany in the Mediterranean Sea. The biggest salvage operation in history cost over $2 billion. With a ship that was more than twice the size of the Titanic, hundreds of engineers had a daunting task to complete. 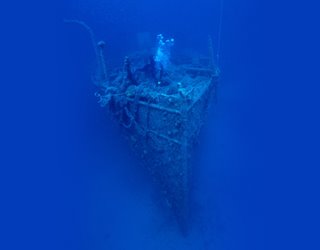 A diver investigating the wreck of the Italian steamer Lina sunk in 1914. Photo: UNESCO
First, over 5,000 tons of oil were removed, then the ship was tilted upright and put on an underwater platform using a centuries-old rotational leverage technique, or parbuckling, with a modern twist of computer-controlled hydraulic jacks pulling the chains. The whole ship was then refloated and towed to Genoa, where it was taken apart five years later.


The biggest challenge for all those involved in finding and studying shipwrecks is that over 80 percent of the world’s ocean is unmapped. There are several efforts to change that, including the recently awarded $7-million Ocean Discovery XPrize to build an autonomous vehicle that is capable of mapping the seabed at a depth of 2.48 miles.

From Our Archives: Engineering the Viking Longboat 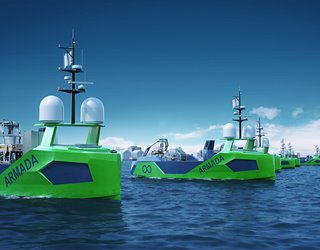 Robotic ships are set to map the ocean floor by 2030. Image: Ocean Infinity
The grand prize winner, Sea-KIT, is an unmanned autonomous vessel with a range of over 10,000 nautical miles and an endurance of months. It can autonomously launch and recover large AUVs (that do the mapping), and, with a cloud-based data processing system for rapid seabed visualization, is going to contribute toward comprehensive mapping of the ocean floor by 2030.

Another project aiming to map the ocean floor by 2030 is aptly called the Armada. A fleet of 15 autonomous ships will travel the world mapping, inspecting underwater infrastructure, and looking for shipwrecks. Robotic ships will vary in size from 69 to 121 feet, will be capable of deploying a range of sensors, AUVs, and ROVs, and will be operated remotely from onshore control centers. The Armada is set to deploy later this year.