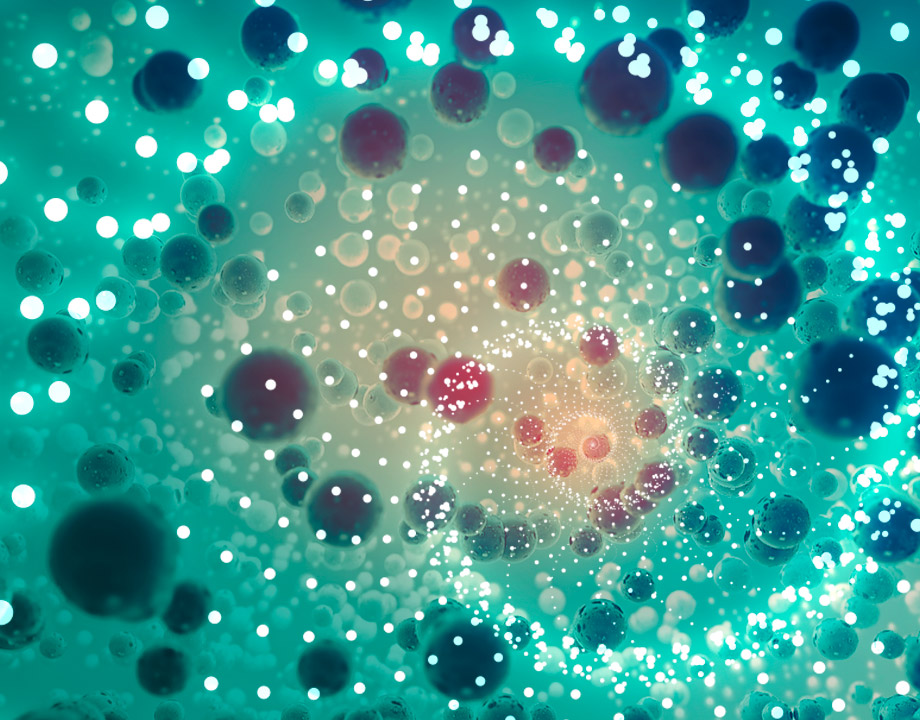 Researchers have developed acoustic tweezers that use a vortex of sound to isolate single particles for precise manipulation.

A Vortex of Sound for a Single Cell

How do you test the strength or elasticity of a single cell? To get anywhere near answering such a question you need a tool that can pick one up, orient it, and place it where you want it—in short, extremely precise tweezers. Anything macro enough to pluck an eyebrow or pull out a splinter is not going to cut it.

For all things micro, it turns out, the best tool could be sound waves. A team of researchers at the Université de Lille in France together with colleagues from the Sorbonne in Paris have created acoustic tweezers that use a vortex of sound to isolate single particles for precise manipulation.

Sound is not the only thing that comes in waves, of course. Optical tweezers have been around since the 1980s (Arthur Ashkin, won the Nobel Prize in Physics in 2018 for his work developing them), but have several disadvantages. Foremost among them is that the force you can apply with optical tweezers is proportional to the intensity of the beam divided by the wave speed. That means that, thanks to the high wave speed of light, optical tweezers require a huge amount of power. The power generates heat and can activate chemical reactions which may damage biological samples. And optical tweezers only work with transparent particles and particles that are around a micron in size.

These problems evaporate when you switch from light waves to sound waves. Objects to be manipulated can be of any transparency and can range from 200 nanometers to millimeters in size. And, due to the weak dissipation of sound waves in common fluids, there’s no heat to damage tiny specimens. 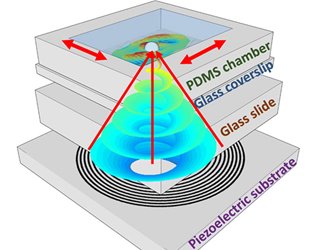 This hologram creates an acoustical vortex precise enough to pick up a single cell. Photo: Uinversité de Lille
To achieve this, Michaël Baudoin, a professor at the university’s Institute of Electronics and Microelectronics and Nanotechnology, and colleagues had to create a sound beam that could trap particles. They wanted to develop tweezers that are selective, that is, capable of picking up one particle independently of other neighboring particles. To do so they needed to focus the energy in a narrow region to act only on a single particle. But with acoustical waves, the majority of particles are attracted to the lowest amplitude of vibration.

So, the energy must be focused, but with a minimum of intensity at the focal point. This apparently paradoxical problem can be solved by using acoustic vortices, which focus the energy but leads to a “central shadow zone” surrounded by a shell of high intensity which can trap a particle. “If you take a bath and open the drain, you will create a hydrodynamic vortex,” he said. “If you have any particle on the surface it will be attracted to the center. Well, it’s the same with acoustical vortices.”

Recommended for You: 5 Technologies to Bring a Quieter World

Baudoin and his colleagues needed to devise vibrating plates to create their vortex. The plates had to vibrate with the same pattern as the audience-created wave at football games—also a vortex. So they made electrodes that are spiral shaped. Rather than rely on something complicated, they created what is essentially a holographic transducer.

Not only are Baudoin’s acoustic tweezers simple, clever, and precise, they’re also dirt cheap to produce. The cost of manufacturing a vortex-producing transistor will likely be a small fraction of a dollar. The larger cost will be the electronics and integrating it within a microscope. Such a tool could work at a variety of scales, much the way microscope lenses can be interchanged.

With a little more work the acoustical vortex tweezers will soon be ready to help researchers work with single cells, testing their strength and elasticity, and arranging them in different configurations to see how the cells interact. The chief difficulty now is to optimize the whole setup so that it can keep cells a alive.

“If you want to work with living cells, you cannot leave them in the room for one day without taking care of them,” Baudoin said. “Keeping them alive I think is one of the big issues.”