A Robot for the Every-Factory

A Robot for the Every-Factory 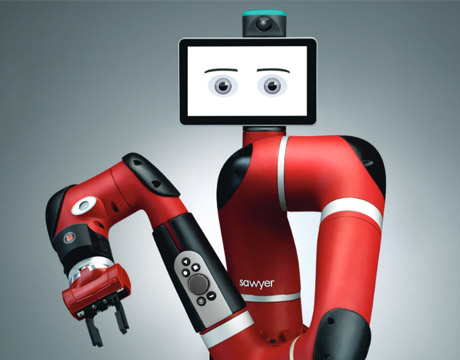 As an SUV chassis marches down the assembly line, powerful caged robot arms swing about, performing repetitive tasks thousands of times a day, with nary a human in sight. Robots have transformed the world of manufacturing, to be sure, but only at the largest of scales. Most manufacturing situations are not big enough to for a robot to make any economic sense, which is why you don’t see them on most factory floors.

Needless to say, there are many repetitive tasks at all levels of manufacturing. If robots could be smaller, safer, and more easily programmed, they’d find employment with the little (and medium sized) guys as well.

Such was the thinking of Rodney Brooks, founder and CTO of iRobot, producers of the Roomba, when he founded Rethink Robotics in 2008. Four years later, the two-limbed, tablet-eyed “Baxter” hit the manufacturing scene. It cost a mere $25,000 and could be taught to load, sort, and generally move things about without a lick of programming. And it required no cage to protect any nearby lifeforms.

But Baxter is a large, 165-pound animal of a robot. Though it can certainly handle basic repetitive tasks, it’s not able to finesse things the way a human hand can. To meet those needs, Rethink has now come out with Baxter’s little brother, “Sawyer.”

Sawyer weighs a mere 42 pounds and has just one arm. It has the same expressive, and, arguably, cute, eyes; eyes that give the user a clue as to what it’s about to do by looking at where it’s reaching before it reaches. But it’s smaller, and far more sensitive. “We designed a robot that was more precise and that can perform applications that Baxter can’t,” says Jim Lawton, Rethink’s chief product and marketing officer. “There are a lot of machine-tending jobs, where people stand in front of a piece of equipment, grab a part, put it in, and wait. That wait can be minutes or seconds. These are roles better served by robots, but they can require a different level of precision. Sawyer is more capable from a precision point of view.”

That precision comes thanks to a variety of new tricks. In particular, where Baxter had C-shaped springs at each joint, Sawyer has newly conceived S-shaped springs. They introduce a new and more precise kind of springiness. This, combined with a camera in its wrist and a few other advancements give it the flexibility to pick up things that might not be in exactly the same place each time.

A human inserting a circuit board, for instance, does not need to know the coordinates of its initial location, or of the place it’s going. “The way you or I do it, we kind of feel our way in, grab an edge, and ‘grok’ it in,” says Lawton. “Muscle memory lets us do it over again, and springiness let’s us flex and coordinate insertion of the fixture in a way that doesn’t damage the fixture or the person. Sawyer does it the same way.”

Anyone in need of robot assistance can put Sawyer to work right out of the box. You train it by showing, not telling. “When my son was young I showed him how to tie his shoes by reaching around and guiding his hands,” says Lawton. “It’s much the same with Sawyer. Walk it through the motions and it remembers it and optimizes it and does it over and over again.” When you grab Sawyer’s wrist to show it what to do, it goes into a “Zero G” mode with motors to compensate for its weight, “so it feels as if it has no mass at all.” The user can press a button to tell Sawyer to grip something, and another to tell it to release. The whole learned operation is recalled with a barcode scan, so it can go off and learn many other tasks and be ready to perform any of them in an instant.

“All those things are being done in software, so it’s invisible and seamless to the user,” says Lawton. “They don’t have to do what you have to do with traditional robots, which is program them.”

Michael Abrams is an independent writer. Learn more about the latest trends in manufacturing at ASME’s AM3D Conference & Expo.

For Further Discussion
Walk it through the motions and it remembers it and optimizes it and does it over and over again.Jim Lawton, Rethink Robotics