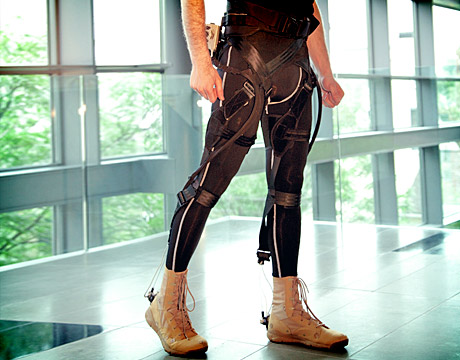 One day in the not too distant future, researchers at Harvard University hope their work with soft wearable robots using innovative textiles can offer easy and unobtrusive assistance to individuals with physical disabilities.

That same work also offers promise for augmenting the capabilities of healthy individuals, for example, helping soldiers carry heavy loads and walk farther and longer by assisting the muscles in the hips and ankles.

In a field only about three years old that evolved from research into “soft robots” as medical devices, Conor Walsh, assistant professor of mechanical and biomedical engineering at Harvard, and founder of the Harvard Biodesign Lab, leads a multidisciplinary team of about 30 researchers developing soft wearable robots. The furthest along are a soft exosuit that can assist with locomotion and perform small levels of assistance to a wearer (such as a soldier) and a glove that assists with grasping motions for those with hand impairment.

Compared to current external rigid structures, the wearer’s joints are much less constrained. Wearing the devices as “clothing” also makes them much lighter since they consist primarily of fabric. This minimizes unintentional interference with the body’s natural biomechanics and allows for better interaction, according to Walsh.

He was attracted to robotics as a student “because it was kind of a cool topic,” he says. After earning undergraduate degrees in mechanical and manufacturing engineering from Trinity College, Dublin, Ireland, then M.S. and Ph.D. degrees in mechanical engineering from the Massachusetts Institute of Technology, he joined Harvard in 2012. As a grad student, he worked on rigid exoskeleton-like robotic systems and was even a test subject evaluating them. “I realized firsthand just how hard it is to use rigid components to interface with the body,” he says.

At Harvard, he saw researchers working in a new field called soft robotics. Instead of rigid components for medical devices, they were using soft materials to apply forces to people as they move. “That made me think, wow, wouldn’t it be cool if we applied these new soft robotic components to wearable robotic applications,” he says.

“We came up with the idea that maybe there is a whole set of people out there, where if you give them small or moderate levels of assistance, you can still have a big impact.”

The system consists of a textile component, an exosuit in different body sizes, made of flexible, lightweight fabrics such as nylon or spandex. It serves as an anchor to the body and allows forces to be applied in a safe and comfortable way. Sensors acting as controllers or monitors of the wearer’s movements are integrated into the suit. The other component, a box the size of a backpack, is the motor and battery that works for all size individuals.

The team has shown through testing with the U.S. Army and others that a system that doesn’t add much extra mass or many restrictions to natural movement and that gives a boost of energy at the right time can enable healthy individuals to carry heavier loads and walk farther.

“It’s still a research project, but it’s quite far along in terms of our capability for testing under different types of conditions,” Walsh says.

The team has also made progress with a soft robotic glove to assist with grasping motions for those with hand impairment, using a different technology, silicon actuators powered by some kind of fluid, water or air.

“Imagine a balloon-type actuator,” Walsh says. “It’s a little more complicated than that, but it’s similar to a balloon. When you pressurize it, it imparts forces on the fingers and causes them to bend in a natural type of motion.”

These are integrated in a glove for people with conditions such as muscular dystrophy or ALS. “We have been testing that on patients from the start and have a nice prototype that we are currently refining to make lighter,” Walsh says. The glove is expected to be put into a small trial later this year.

Robotic devices for the hand have been particularly challenging because traditional rigid exoskeletons are heavy and hard to align properly to the person, Walsh said. “That’s where we saw an advantage to using soft robots that could be more flexible, more lightweight, easier to put on and more easily aligned to the person’s anatomy. So far we have had some pretty exciting results. Patients are able to do things that they wouldn’t otherwise be able to do,” he says.

Walsh believes these kinds of devices could be available within the next three to five years. “The technology opens up new possibilities that wouldn’t be possible with rigid robotic components. It’s really just starting as a field. It’s rewarding because the technology is cool, but the fact that it’s toward the goal of helping people, that makes it all the more compelling,” Walsh says.