A Flying Microchip for Advanced Data-Collection

A Flying Microchip for Advanced Data-Collection 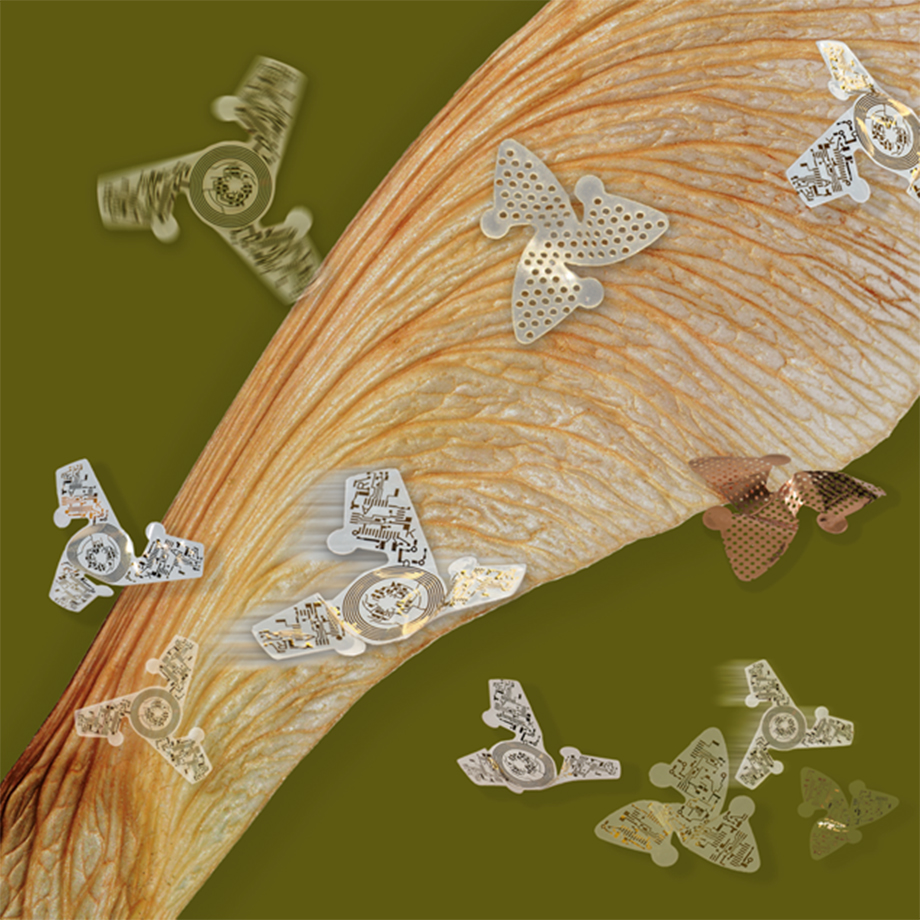 A Northwestern University engineering team designs the world’s smallest human-made microchip with wings to measure the air for contamination, weather patterns, or even airborne diseases.

Acoustics, Vibration, Friction, and Force Aerospace Materials Robotics
Creating equipment that could monitor the air for contamination, weather patterns, or even airborne diseases meant thinking small, really small. Engineers from a Northwestern University research group bandied together to design such a miniaturized device.

“I think it’s kind of an outgrowth of research programs that we’ve had in my group over the last 15 years around body integrated sensors that monitor health parameters,” said John Rogers, Ph.D., at the McCormick School of Engineering at Northwestern University.

“Over the years, we’ve developed a suite of sensors for those types of applications — medical applications,” he says about the work his research group has accomplished. “Could we (then) leverage those same technologies for monitoring, not just an individual but an individual’s surroundings?”

And so, the microflier was born.

Recommended for You: Using Micro 3D Printing for Short-Run Production

This electronic chip — no bigger than a grain of sand, a pinprick on the human finger, or one millimeter — was initially built as a flat, planar device embedded with miniaturized technology, including sensors and wireless communication capabilities. But to monitor the atmosphere, the chip needed wings.

“These devices consist of two parts: one is the silicon integrated circuit component that provides the functionality, and the other part of the device consists of the wings that will allow it to ride on wind currents for dispersal and engaging with the atmosphere,” Rogers said.

Riding on wind currents isn’t a new idea. Plants and trees use this method to disperse their seeds. In fact, the team designed the three-winged microflier after heavily studying the wings on a tristellateia seed, noting its controlled descent. To mimic that dissent, engineers looked to children’s books.

“The biggest challenge...was how to get the wings on the chips,” Rogers said. “We developed approaches that are conceptually similar to a children’s pop-up book. We form these wings in a flat, planar geometry. Then, we have a way to cause them to pop up from the initial planar layout into a 3D helicopter shape.”

For the wings to pop up, Rogers says, the team applies the same kind of patterning forms used in the circuits but now affixed to polymeric or plastic materials to define the tiny wings and bond to the circuit chips to help form the 3D shape.

You May Also Like: Why Flying Snakes Make Mid-Air Undulations

Once in flight, the microflier can collect atmospheric data. But, depending upon the type of data collected, it will take thousands, perhaps even tens of thousands of these minuscule fliers, Rogers believes, linked across a wireless network to truly be effective. 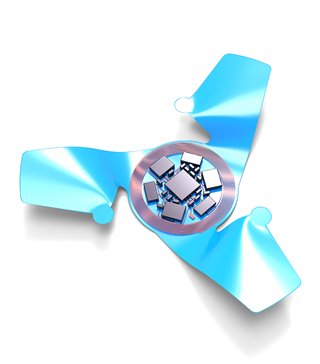 The microfliers are made of millimeter-sized electronic functional components and their wings. As the microflier falls through the air, its wings interact with the air to create a slow, stable rotational motion. Image: Northwestern University
Currently, there are two types of ways to gather the data from the microflier. The simplest way is to embed color-changing chemicals into the device meant to respond to the specific item being measured, which can be monitored via a drone using high-res imaging that identifies and scans the colors. The second way to gather data is to build micro-radios for wireless communication. Rogers and his team believe that both ways are more than viable solutions.

“We just published our first paper, so we are a few years out from the practical application,” he said about the current state of the microflier, but he adds that he and his team have high hopes for the device’s future and the data it could collect. “I think chemical spills. Contamination in the soil. Monitoring weathering patterns. We would love to be able to monitor airborne pathogens like COVID.”

And while biological pathogens like COVID are high on his priority wish list of data he’d like the microflier to collect, he realizes this will entail creating a whole new way to tag the pathogen.

“The COVID virus is very tiny. You think about the actual density of viral particles that might be present as aerosols in the environment. Ideally, you would like to be able to measure the COVID virus and not some other kind of virus.”

Because the microfliers will be used in nature, the team also looked to biodegradable engineering currently found in medical technology as a way to ensure safe and easy clean-up.

“One specific technology of that type we’ve been working on over the last 10 years involves resorbable materials” like medical sutures, which can disappear over time. “We can build electronics that have the same characteristics,” he adds.

Not only are these microfliers easy on the environment, but they won’t endanger wildlife, Rogers says.

“It’s not a problem. I’ve eaten these devices myself. They are made out of materials that are ingestible, biocompatible, and environmentally benign.”

Nichole M. Palmer is a writer from Charlotte, NC.