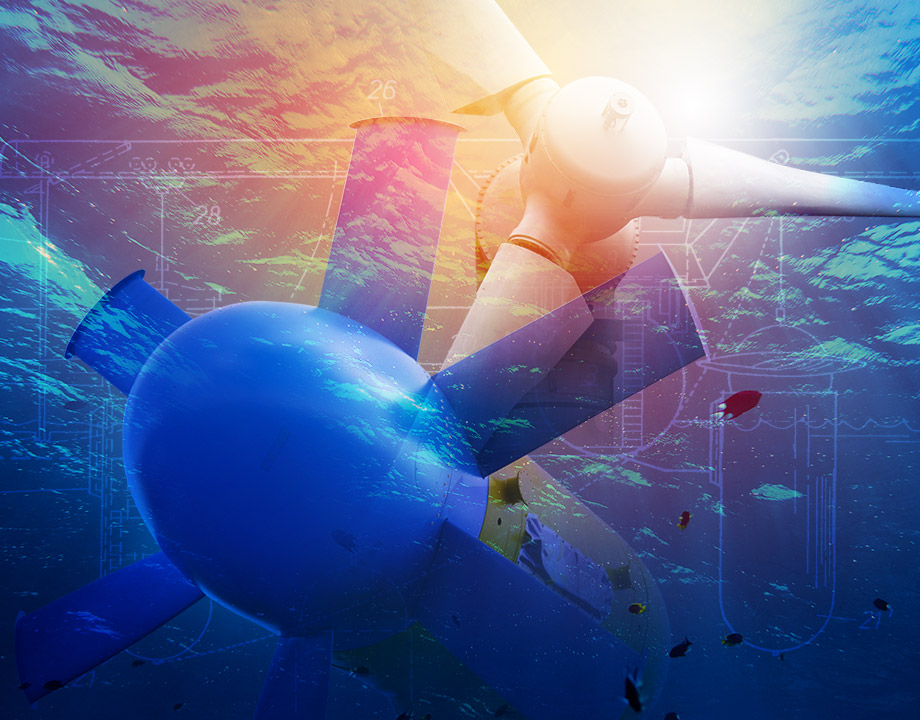 Capturing the power of tides is still in its early stages of development, but there are big gains in this renewable energy sector.

Although the marine energy sector is still in the early stages of development, big gains are being made in tidal energy. Successful projects range from the most basic hydroelectric fundamentals to the latest cutting-edge technologies.

One reason tidal energy is such an attractive resource is because it is so reliable—tidal currents are controlled by the gravitational fields of the Earth, moon, and sun, making them very predictable, even years in advance. Tidal power won't replace other forms of renewable energy, but can supplement energy grids and, in some cases, be the sole source of power for small coastline communities.

Most tidal projects rely on turbines to convert the mechanical energy in tidal currents to electricity. Concentrators or shields placed around the blades help optimize tidal current flow toward the rotors. High-tech equipment is required to deploy these devices in rough seas and anchor them to the seabed.

Direct-drive, hydraulic, and inertia systems continue to evolve—for example, considerable research is being done on dielectric elastomer generators, which utilize soft capacitors that do a better job of withstanding the harsh ocean environments, compared to more traditional equipment, such as electromagnetic generators.

Below are six popular methods and technologies that are leading the way in capturing this renewable ocean energy. 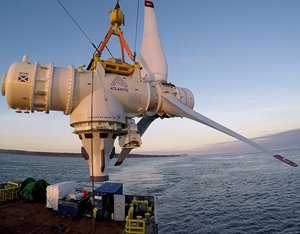 One of the world’s largest tidal energy arrays is feeding Scotland’s power grid. Photo: SIMEC Atlantis Energy
There is no standard tidal stream generator design—the most popular types are horizontal-axis turbines and vertical-axis turbines. Single rotors are set with fixed or adjustable-pitch blades that can align with the tidal currents as they fluctuate.

One of the world’s largest arrays, built by SIMEC Atlantis Energy, is feeding Scotland’s power grid with steady, reliable power. With blades up to 65 feet in diameter, its four 1.5-MW turbines generated more than 7 GWh of renewable energy in 2019.

These devices are shaped as a corkscrew and have helical surfaces that surround a central cylindrical shaft. Water from the tidal stream is drawn up through the spiral, turning the turbines. Archimedes screws can be deployed as fully submerged tidal stream devices or can be enclosed in pipe systems. Compared to larger tidal stream turbines, Archimedes screws harm fewer fish and other forms of marine life.

Tidal dams and barrages capture and release tidal currents, generating electrical energy.Tidal lagoons are similar in operation and rely on mature hydroelectric technology. Water wheels are currently being tested to see if they can provide better control flow and power at low head sites in lagoons.

Tidal barrages are long concrete structures, usually built across river estuaries that have tunnels containing turbines. The turbines generate power when tidal currents flow through them. Because they don’t completely restrict flow, barrages have lower environmental impact than tidal lagoons.

Further Reading: Harvesting the Power of the Ocean 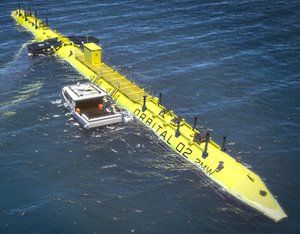 Orbital O2 is a 73-meter-long floating device, supporting two 1 MW turbines at either side. Photo: Orbital Marine Power
For these systems, turbines are mounted to the underside of a floating platform or barge. They still tap the tidal currents, but for greatly reduced installation and maintenance costs.

Orbital Marine Power, a Scottish company, has developed a floating device that generated about 3 GWh of power. The company plans to make a 73-meter-long floating superstructure that supports two 1-MW turbines on each side that can generate twice as much energy and be distributed in arrays on the ocean’s surface.

Tidal kites are tethered to the seabed and carry a turbine below the wing. When the kite “flies” in a figure-eight shape in the tidal stream it maximizes the volume of water passing through the turbine.

Minesoto, a marine technology company, has created “Deep Green,” a tidal kite that can create several hundred times more electricity than a stationary turbine on the sea floor. Almost all large tidal energy systems are anchored to the sea floor and require tidal currents of 2.5 meters per second or faster to produce cost-effective electricity; Deep Green can also produce electricity from slower currents in the 1.2-to-2.4-meters-per-second range, making it more versatile.

Further Reading: Two for the Price of One: Offshore Wind and Marine Power Platform 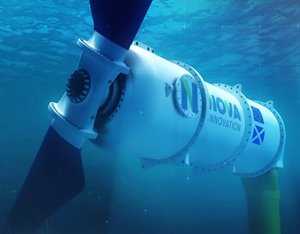 The ELEMENT project will use AI to improve tidal turbine performance and accelerate commercialization of tidal energy. Image: Nova Innovation
Nova Innovation, another Scottish company, is leading the development of a major European project called Element. The designers will integrate artificial intelligence (AI) equipment that will optimize the efficiency of the turbines and adjust them to changing conditions in real time. The AI system will utilize data derived from wind energy that is captured at the surface and transmitted to the turbine system to maximize turbine performance and efficiency, reducing lifetime costs for this tidal energy by nearly 20 percent.

The Power of the Tides

Even though tidal energy is still in early development and not yet cost-competitive with more mature renewable energy technologies such as wind and solar, the ever-increasing scope of new projects and new technologies will soon make tidal energy a major player in some areas around the world. As these capabilities continue to advance, researchers can go beyond tidal currents to harness energy from deeper massive thermal current systems in the oceans, such as the Gulf Stream.

Mark Crawford is a technology writer based in New Mexico.