Harvesting the Power of the Ocean

Harvesting the Power of the Ocean 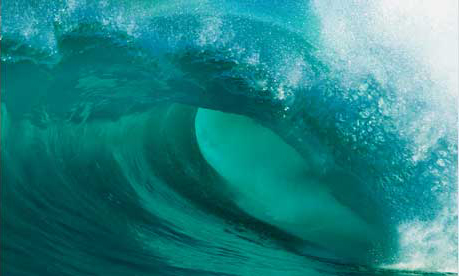 Sources of renewable energy that don't emit pollution or greenhouse gases should be greeted enthusiastically by people concerned with environmental health.

Yet, hydroelectric dams have been criticized for drowning riverside habitats and decimating salmon runs. Large wind turbines are opposed by some due to their visual impact and threat to bird and bat populations. Some experts contend that crop-derived fuels, such as ethanol are inefficient and occupy land better used to feed people. And solar energy, while too expensive to use on a wide scale, could one day be denounced for glazing over square miles of natural landscape.

But another significant, untapped renewable energy source also exists: the world's oceans. It is estimated that harnessing just 2 one-thousandths of the oceans' untapped energy could provide power equal to current worldwide demand.

Engineers have attempted, with varying success, to tap ocean energy as it occurs in waves, tides, marine currents, thermal gradients, and differences in salinity. Among these forms, significant opportunities and benefits have been identified in the area of wave-energy extraction.

Waves may be seasonal, but are more constant—and more predictable—than wind or sunlight. Constancy and predictability enable a more straightforward and reliable integration into the electric utility grid. Wave energy also offers much higher energy densities, so devices can extract more power from a smaller volume at consequently lower costs.

On the Oregon coast, for example, wave heights offshore average 3.5 meters during the winter, which translates to about 50 kW per meter of crest length. During the summer, average wave heights are lower, about 1.5 meters, which convert to 10 kW per meter of crest length. Considering an overall average of 30 kW per meter, the total energy potential along the entire Oregon coast (which is 460 kilometers—or 280 miles—in length) is in the range of 13,800 megawatts. The average electrical energy consumption in the state is about 5,000 to 6,000 MW.

Other areas, such as Chile, Australia, New Zealand, Ireland, Scotland, Portugal, and Norway all have substantial wave power potential due to features they share: a relatively high latitude and a long stretch of ocean immediately to the west.

It's not difficult to envision just how to tap this energy using a water-borne analogue to the terrestrial wind farm; call it a wave park. Wind turbines would be replaced by wave energy-capturing buoys, each having a power cable that drops down along the tether to the anchor and is routed to a central junction box located on the seafloor. At the central junction box, the unregulated voltages from all buoys could be "combined" and conditioned as regulated dc for delivery to the shore through a single submarine cable. At the shore substation, the dc power could be inverted to ac, and connected to the grid.

The buoys would be placed in water depths of 100 to 200 feet—before the waves start to break and dissipate their energy—at about one to three miles offshore, from where the parks would be virtually imperceptible from the beach.

At Oregon State University, the wave energy team has researched novel direct-drive generators, where the buoy's velocity and force is directly coupled to the generator without the use of hydraulic fluid or air. The advantage is simplicity. The generators respond directly to ocean movement by employing magnetic fields for contactless mechanical energy transmission and power electronics for efficient electrical energy extraction. The designs studied include buoys that incorporate permanent magnet linear generators, permanent magnet rack-and-pinion generators, and contactless force transmission generators.

To be sure, some people may object to the very idea of harvesting energy from the ocean—better to do without the electricity than to despoil yet another natural environment. But the demand for electrical power is all but insatiable, and the choice isn't between wave energy and a low-tech society, but between wave energy and other sources of power— renewable or fossil. By that measure, wave energy has tremendous potential. It can be clean, efficient, and reliable—something both utility managers and environmentalists can embrace.

[Adapted from “Harvesting the Waves,” by Annette von Jouanne, for Mechanical Engineering, December 2006.]

It is estimated that harnessing just 2 one-thousandths of the oceans' untapped energy could provide power equal to current worldwide demand.