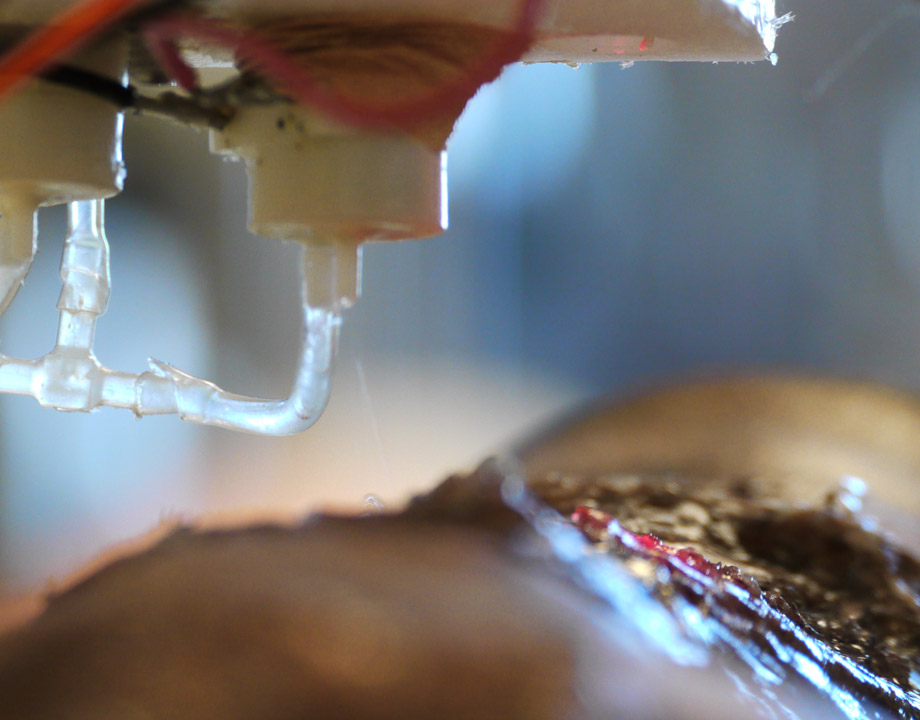 Skin is one organ that varies greatly from patient to patient. Unlike damaged livers or lungs, which can be replaced by a donor, transplanting skin from one person to another is nearly impossible.

Now a team at Wake Forest Institute for Regenerative Medicine has come up with a new way around the problem—3D printing new, healthy skin directly onto a patient. It also promises faster and less complicated relief.

Grafting a healthy slice of a patient’s skin is the most common way to treat skin wounds and serious burns. This usually works well with smaller wounds. For deeper or larger wounds, however, there is not always enough healthy skin to transplant. This leaves patients with painful scarring and disfigurement.

About seven years ago, Wake Forest assistant professor Sean Murphy and his team dreamed up the idea for a bioprinter that could 3D print skin directly onto a wound using the patient’s own cultured cells.

Their design uses a handheld 3D laser scanner that captures the geometry of the wound in one continuous scan.

You May Also Like: Making 3D Skin Printer Portable 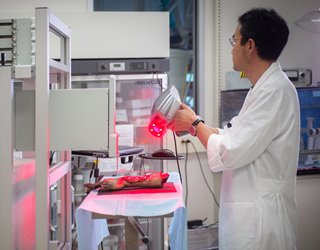 A handheld scanner maps this model of a deep wound. Software then deconstructs the map into thin layers of skin tissue. Full healing takes about three weeks. Photo: Wake Forest Institute for Regenerative Medicine
Software developed by Wake Forest uses this data to create a three-dimensional map of the wound. The program then deconstructs the map into layers no more than a millimeter thick, identifying reference points that enable the printer to find its exact location within the wound. These reference points are critical, since they allow the printer to respond to any movements the patient might make during the procedure, including breathing.

“It’s a similar type of technology that MRIs use to identify a window in which it can operate,” Murphy said. “If the patient goes outside of that window, the system pauses. When they move back into that area, it will pick up where it left off. This adaptation happens very quickly and the printer is constantly in a state of correcting itself.”

For skin grafts to succeed, the team first has to extract and grow dermal cells in a bioreactor. This requires biopsy of skin about the size of a postage stamp, which they place in a bioreactor.

Within two days, they can have enough cells to cover the length of a football field. For most wounds, they need only wait a few hours to expand enough cells for the procedure.

During this process, the researchers also parse out the types of cells specific to each layer of skin. For now, the team is focused on the first two layers, the epidermis and the dermis.

Those cells are loaded into cartridges in the bioprinter. It works much like a standard ink-jet printer. Instead of different colored inks, its reservoirs hold different types of skin cells, growth factors, and tissue scaffolding materials that it extrudes as a hydrogel.

Layer by layer, the printer fills in the wound with a hydrogel infused with the patient’s cells, making sure to place the different cell types exactly where needed so the body can turn them into new, healthy tissue.

This heightened level of purity and precision required a few mechanical upgrades to the bioprinter. The printer, for example, now uses an air-pressure system with a two-stage control valve that allows technicians to load cells into the delivery system with more control. It also incorporates individual pumps for each syringe, making it easier to control system pressurization and depressurization.

These components were critical in the success of the technique because laying the wrong cell types in the wrong layers could result in a slower healing process or further complications for the patient.

Murphy and his team faced challenges when optimizing the bioink. While it needed to carry cells to the wound’s surface, it also had to contribute to the healing process. That meant optimizing it for the printer and for the patient as well.

Depending on the size and depth of the wound, the printing procedure takes place in only minutes. When done, it leaves an opaque gel sitting atop the wound, which can actually be soothing for the patient.

Within one week, the patient will begin to show growth of very immature skin. After two to three weeks, the skin should be completely healed without any sign of scarring or injury.

In fact, patients should even be able to see new hair growth in the area, something that doesn’t happen for patients who heal naturally.

The Wake Forest team wants the Food & Drug Administration to approve the bioprinter for human trials, but this will take time. The FDA has not seen anything like this before, Murphy explained, and it may time to create new protocols to test this type of technology.

Murphy’s team now is developing more cell types—muscle, fat, bone, and cartilage—that will allow them to go beyond just printing on the surface. One day, Murphy hopes, the bioprinter could heal and repair tissue instantly, even as it’s being injured during surgery.

“We’d like to go much deeper,” Murphy said. “The potential is limitless with what we can achieve as we build on this progress.”

Cassie Kelly is a freelance engineering and environmental writer based in Ohio.