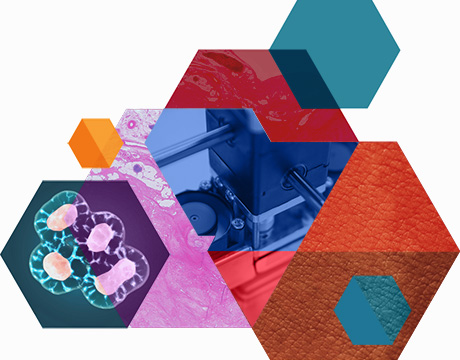 Skin, the largest organ in the human body senses temperature, pressure, and pain. Recent advancements in artificial and 3D-printed skin could soon deliver those sensations and more to robots, prosthetics, and humans.

Today’s artificial skin uses sensors, microelectronics, and conductive materials to “feel” sensations. Scientists are also using human cells and 3D printing to make human skin that can be used to cover wounds or as a permanent replacement for lost skin. Engineering advances for artificial skin and human skin could even merge in the future, paving the way for "cybernetic” organisms that have both organic and biomechatronic body parts.

Artificial skin uses sensors to help prosthetics and robotic limbs process sensations and perform tasks with dexterity. But the best artificial skins can only measure one stimulus. Researchers want to create artificial skin that responds to multiple stimuli the way real skin does, creating more functionality. This requires embedded arrays of nanoscale sensors. Depending on the number of sensors and array density, artificial skin can be hundreds of times more sensitive than human skin.

Researchers at Graz University of Technology (TU Graz) in Austria plan to do just that by creating a nanoscale sensor that simultaneously detects temperature, humidity, and pressure. “These sensors will be made of a smart polymer core which expands depending on the humidity and temperature, and a piezoelectric shell, which produces an electric current when pressure is applied,” said Anna Maria Coclite, principal investigator and assistant professor at TU Graz's Institute for Solid State Physics.

These smart cores would be sandwiched between two nanoscale grids of electrodes, which sense the electrical charges given off when the sensors “feel” and then transmit this data. “The idea is that it could be used like robotic hands to sense temperature or even things at a much smaller scale than humans can feel—for example, bacteria,” she says.

For You: The Best Engineering Stories of 2018

In other developments, scientists at the University of California, Los Angeles, and the University of Washington have created a silicone rubber skin that simultaneously detects normal forces, shear forces, and vibration with great accuracy. The material is embedded with tiny channels that contain conductive liquid metal. When a robot finger covered in this skin slides across a surface, some of the material grows taut and some bulge. This alters the flow of electricity within the channels, which is an indication of how much shear force and vibration the skin is experiencing. This extra sensing ability will help robots or individuals with prosthetics complete gripping and manipulating tasks more effectively.

“Traditionally, tactile sensor designs have focused on sensing the individual modalities of normal forces, shear forces, or vibration exclusively,” says Veronica Santos, a co-researcher and associate professor of mechanical and aerospace engineering at UCLA. “However, dexterous manipulation is a dynamic process that requires a multimodal approach. The fact that our latest skin prototype incorporates all three modalities creates many new possibilities for machine learning-based approaches for advancing robot capabilities.”

A team of engineers at the California Institute of Technology (Caltech) and ETH Zurich has developed an artificial skin made from pectin, a naturally occurring long-chain molecule present in plant cell walls. "Pectin is widely used in the food industry as a jellifying agent,” said Chiara Daraio, professor of mechanical engineering and applied physics at Caltech. “It is used to make jam, so it is easy to obtain and also very cheap."

This unique material consists of a thin, transparent film of pectin and water that is about 20 micrometers thick, just a bit thicker than a strand of human hair, and generates an electrical response when exposed to temperature changes. Pectin molecules have a weakly bonded double-strand structure that contains calcium ions.

“As temperature increases, these bonds break down and the double strands ‘unzip,’ releasing the positively charged calcium ions,” according to the team. This results in a decrease in the electrical resistance throughout the material, which can be detected with a multimeter connected to electrodes embedded in the film.

“The material could be grafted onto prosthetic limbs to restore temperature sensing in amputees,” the researchers wrote. “It could also be applied to first-aid bandages to alert health professionals of a temperature increase—a sign of infection in wounds.”

Impressive advances are also being made in the 3D printing of human skin in the laboratory. For example, researchers from Universidad Carlos III de Madrid and Hospital General Universitario in Valencia, Spain, have created a 3D bioprinter that creates totally functional human skin—in its natural layered structure—that is suitable for transplantation. Allogeneic skin is generated from a stock of cells on a large scale; autologous skin is made from an individual’s own cells for therapeutic use, such as treatment for severe burns. Bioinks using these cellular components are the key to 3D bioprinting healthy, functional skin. "Knowing how to mix the biological components, in what conditions to work with them so that the cells don't deteriorate, and how to correctly deposit the product, is critical to the process,” said researcher Juan Francisco del Cañizo from Hospital General Universitario.

Another group has successfully printed human skin with natural pigmentation. Scientists at the Singapore Institute of Manufacturing Technology and the Singapore Center for 3D Printing at Nanyang Technology University used bioprinting to control the distribution of melanin-producing skin cells on a biomimetic tissue substrate, creating skin with pigmentation like that of real human skin.

Scientists at the University of Toronto have developed a handheld 3D skin printer that applies layers of skin tissue directly on wounds. The device represents an alternative to painful skin grafts. A similar printer has been invented at Wake Forest School of Medicine, Winston-Salem, N.C., which uses a bioink that contains a variety of skin cells. According to the school, “a scanner is used to determine wound size and depth. Different types of skin cells are found at different depths. This data then guides the printer as it applies layers of the correct type of cells to cover the wound.”

A lesser-known benefit of bioprinting human skin is its potential for eliminating the testing of cosmetics and other chemical products on animals. For example, L’Oreal has partnered with bioengineering company Organovo to provide 3D-printed skin samples, which enables product safety and performance testing without using animals.

Artificial skin will one day be implanted in humans, while advances in artificial skin will improve the technology for developing human skin or even creating a “super skin.” However, before this can happen, the structure and mechanical properties of this organ require much more study. For example, scientists know little about how skin stretches or how to determine its tension.

“This is really important to surgeons, who need to know in which direction they should cut skin to avoid extensive scarring,” said Michel Destrade, an applied mathematician at the National University of Ireland Galway who is developing mathematical models for the behavior of soft tissue. “The people who create artificial skin need to know how to deal with mismatches in tension when they connect it to real skin. This includes knowing the best way to cut and stretch it.”

Coclite of TU Graz's Institute hopes to make sensors that can detect more stimuli, such as acidity or sweat. Perhaps in the future people who have lost a limb or suffered burns will benefit from such multi-stimuli sensing capabilities in convincingly human artificial skin.

“It would be fantastic if we could apply it to humans but there's still lots of work that needs to be done by scientists in turning electronic pulses into signals that could be sent to the brain and recognized,” she said.