Where are the Nanobots?

Sometimes, a technology bursts onto the scene and it takes engineers decades to catch up with its promise. That is exactly what happened with 3D printing and PCs (just ask anyone who ever owned an early Radio Shack or CPM computer).

It also happened in November 1984, when Nature, a leading scientific journal, published an image of a 60-carbon buckyball on its cover.

Buckyballs, which looked like two geodesic domes welded to one another, were so unexpected that they immediately touched off speculation about what else might be possible at the nanoscale.

Into the breach stepped K. Eric Drexler, an MIT engineer who had been studying nanoscale manipulation of molecules. In 1986, he published a book, Engines of Creation: The Coming Era of Nanotechnology, that proposed (among other things) self-replicating machines and nanoscale robots that could assemble anything one atom at a time.

The idea of nanoscale robots that could build everything from cars to replacement organs really caught on with the public. Powered by growing public excitement—as well as good scientific reasons—the United States and other nations poured billions of dollars into nanotech research.

The results have been mixed. Nanotechnology plays a large role in building semiconductors (whose features are only a few nanometers in size) and in encapsulating extremely powerful medicines in coatings designed to target tumors and not healthy cells. It has improved protective coatings and made possible quantum computing.

But where are the robots?

It turns out that making machines thousands of times smaller than the average human cell is not at all simple. Even 35 years after the first buckyball, it is still incredibly difficult for researchers to see what they are doing at the nanoscale, and even more difficult to manipulate such small objects.

Then, there is the matter of physics. Engineers know how bulk materials behave. At the nanoscale, we can throw that knowledge out the window. 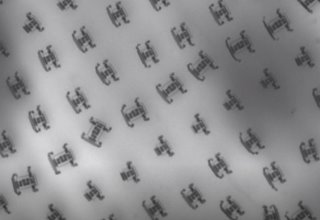 An army of microscale robots start to move by flexing their four feet. One million of them fit on a 4-inch silicon wafer. Photo: Cornell University
Nanoscale objects also have unusual physical properties. They are buffeted by forces that go unnoticed in the macro world, such as van der Waals attraction, random vibrations, and the ability to interact with light photons. They have extremely high surface areas, and that affects things like chemical reactivity, heat transfer, and electrical conductivity. Designing with them an entirely new discipline.

Yet, we are getting closer to nanobots, and not just dumb machines, either. Researchers at Cornell University are developing tiny mobile robots that contain photovoltaic cells and simple processors that may one day may do real computation. Although their four legs churn too fast to see, their movements resemble water bugs skittering over a pond in slow motion.

They are only a handful of microns in size, which is slightly larger than the average human cell. They rest on 10-nanometer-thick legs. Its developers, Itai Cohen and Paul McEuen of Cornell and Marc Mishkin of University of Pennsylvania, can make 1 million from a single 4-inch silicon wafer.

Building microbots on silicon wafers is a breakthrough in two ways. First, silicon wafers are also used to make semiconductor processors, solar cells, and sensors. These technologies can power microbots and enable it to navigate, communicate, and makes sense of their world. Rather than dumb machines, they would become smart robots.

Second, it provides a powerful example of how to turn a flat object—a thin sliver of silicon with circuits printed on it—into a three-dimensional robot.

The secret lies in using the ancient Japanese arts of origami (folding) and kirigami (cutting) to create 2D surfaces that morph into 3D nanobots.

“Wait a minute,” you might be thinking. “How can you fold silicon, which is stiff and brittle?”

The answer is that, at the nanoscale, this is not the case. Nano-thin strips of silicon are not just ductile, but flexible. By keeping the nanobot’s legs to only 10 nanometers, the researchers can take advantage of that flexibility to legs that bend repeatedly without hinges.

A close up of Cornell’s microbot showing its four flexible legs and solar cells. It is next to a single celled organism, possibly a paremicium. Photo: Cornell University
Cohen, a physicist with the hands-on attitude of an engineer, began working on origami through a grant that teamed him with artists to study the mechanical properties of origami structures and their transformations. He probed the mathematics of how valley-like structures could snap instantly into mountain-like objects and totally change an object’s mechanical behavior.

Meanwhile, his colleague McEuen was exploring kirigami. McEuen worked primarily with graphene, a form of carbon only a few atoms thick. He reasoned that kirigami cuts would enable him to turn graphene into three-dimensional nanoscale objects.

“We started dreaming,” Cohen said. “And that got us thinking about how to make machines at the nanoscale.”

Together, they hired Mishkin, a post-doctoral researcher, to bring their two separate strands of research together.

They started with a silicon body and four folded legs made of thin platinum strips coated on one side with titanium. As the solar cell charged up the legs, the platinum attracted ions floating nearby. These absorbed onto the platinum surface and caused it to contract.

The titanium layer, however, remained unaffected. So, as the platinum layer contracted, it pulled the titanium around it like a bending knee. To create true bendable joint, the researchers coated the platinum with plastic, leaving it exposed only where they wanted it to bend.

A simple control circuit in the silicon body turned that motion on and off, enabling the legs to fold at blinding speeds around the joint.

There is more to come. One of Cohen’s graduate students developed a way to create both mountain and valley folds in any direction. The team seized upon this to create the world’s smallest folded bird and structures with more than 100 folds.

“The ability to cut and fold in either direction means that all origami and kirigami strategies are now open to us,” Cohen said.

Cohen envisions building more complex robots and machines in the future. One possible application is an array of beating nanoscale leg that could pump and mix fluids in lab-on-a-chip diagnostics, or microbots that change their shape to encapsulate and kill tumors.

Most of all, though, he envisions building computer processors on his creations to make truly smart microbots.

“You can put the computational power of the spaceship Voyager on a machine that is smaller than the width of a human hair,” he said. “And that is fantastic.”