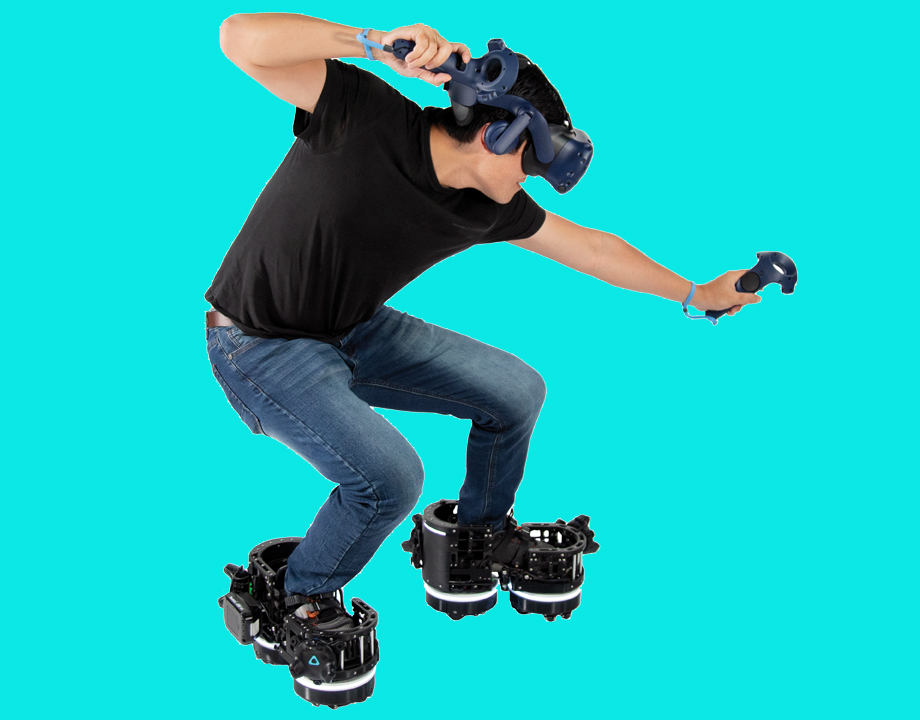 As virtual reality applications multiply, users are presented with a variety of scenarios, either through gaming or industrial training. As they move through a program’s array of scenarios, they are doing just that—moving. And that can be problematic as people may actually walk into walls or objects as they physically walk through a virtual scenario.

That problem may soon be solved by a Pittsburgh-based startup, EKTO VR. Brad Factor, the firm’s founder, is developing robotic boots for VR users that keep them in one place while walking. The concept is similar to a treadmill: as a person walks forward, the boots slide back keeping him or her from advancing. 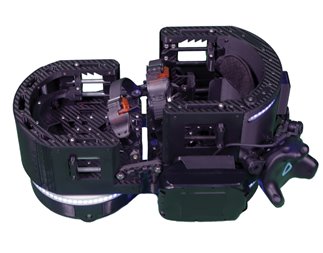 Robotic boots use wheels for users to walk through VR programs and remain in place. Image: Courtesy of EKTO VR.
The boots are of a lightweight carbon-fiber designed with many of the parts produced by 3D printers, said Factor. They incorporate Vive Tracker pucks to track movement in virtual reality. Two plates on the bottom of the boot rotate and twist in the direction the user is walking. As the leg lifts and then puts the foot on the ground, a set of wheels pulls the leg back, giving the sensation of walking.

Except the user is not advancing, but remaining in the original spot. The boots also have brakes that are applied when standing still to prevent the user from falling, similar to using skates.

Factor got the idea in his previous life as a flight control systems engineer. In the early stages of virtual reality development, he began to think about how to build on the development of headsets, and began to look into movement.

Then he realized he did not know enough to move on the idea, so he entered the post-graduate program at Carnegie Mellon University. As a capstone project, he “explored the foundation of VR,” he said, which led to his first stab at developing the concept.

“My first thought was mobile robots. Picture yourself (standing) on hyped-up roombas,” he said.  “It was an interesting concept but from safety and performance perspective, physics was not behind us.”

Early iterations were wired and bench powered, he said, with boots that only moved forward. “Omni directional control is very important, and you have to accommodate people’s gaits,” he said. “No one walks the same way. So we needed a novel drive.”

The result are a pair of boots, each fitted with four wheel, two in the front and two in the back. They roll against the user’s movement when walking and lock in place when stopped. Hip and ankle movements allow the system to determine when the user begins to move.

They allow forward and backward movement as well as side to side. The wheels accommodate the range of movement through their ability to rotate 90 degrees. Four motors control the wheels and another four control the rotation. The Vive Tracker platform works with HTC Vive or Valve Index virtual reality headsets.

Factor said he is contracting out carbon fiber machining, metal machining and a significant amount of 3D printing for parts for the early iterations of the boots, which his team assembles in house. He is crowd sourcing to move the development along.

But the work far enough along now for Factor to target industrial markets, where firms use VR programs and headsets to train workers. “We’re ready to launch proof of concept now,” Factor said.

Taking the boots into the VR gaming world will require more development, he said. They will have to be less cumbersome and faster, but Factor anticipates getting there in two years or so. The system already works with Steam VR games. The firm demonstrated their use in Half-Life: Alyx, which can be viewed on its website.