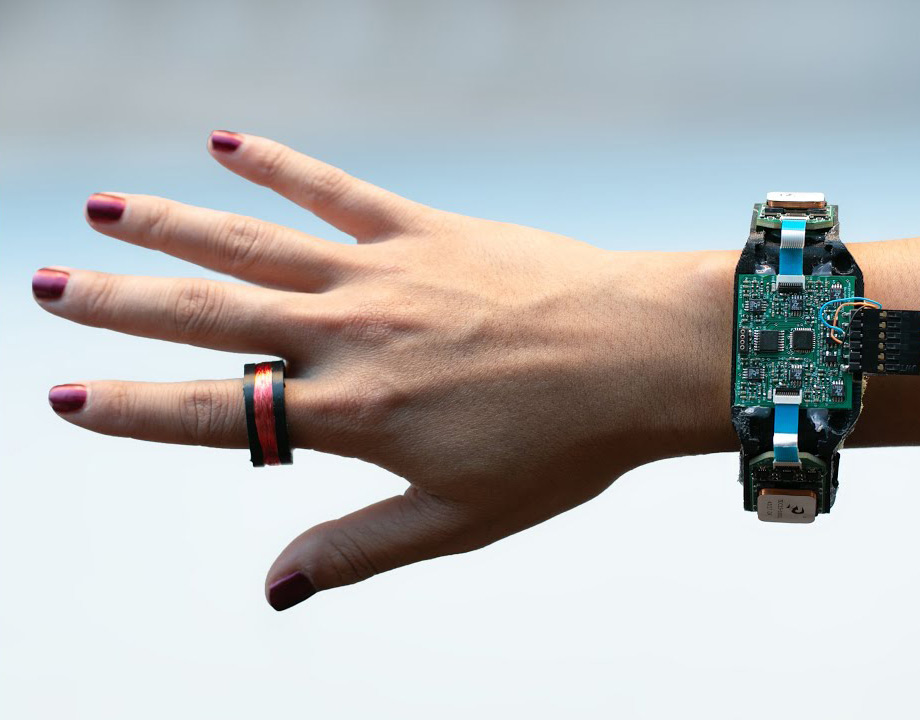 A smart device that enhances gaming experiences could also be integrated into fitness bracelets for biomedical applications.

Researchers at the University of Washington are seeking new capabilities for the next generation of computing platforms—particularly for portable virtual reality and augmented reality devices. They recently developed a tool that not only may improve gaming experiences but could also be integrated into smartwatches and fitness bracelets for biomedical applications.

The device consists of a wearable wristband and ring system, called AuraRing, that continuously monitors hand and finger movements. It can detect the precise location and position of the index finger as well as even the tiniest movements of the user’s hand and distinctive finger movements such as taps, flicks, and pinches. The ring emits a signal picked up by the wristband that allows identification of the position and orientation of the ring and the finger on which it’s worn. 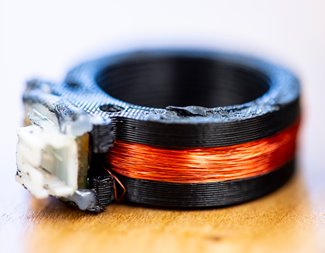 “We always had this thought that if you are on a crowded bus, how would you text someone if your phone is in your pocket and you can’t get it out or if you are in a meeting, how could you text someone in a subtle way,” said team member Farshid Salemi Parizi, an engineering doctoral student. Others on the team were Eric Whitmire from the university’s Paul G. Allen School of Computer Science & Engineering, and Shwetak Patel, a professor in both the Allen School and the electrical and computer engineering department. 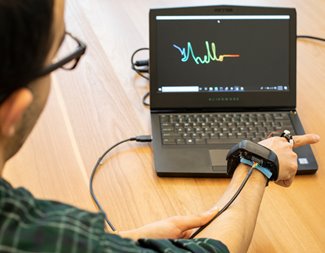 AuraRing can differentiate between taps, flicks, or even a small pinch versus a big pinch. Multiple types of inputs could be used for different actions in a game. Image: Dennis Wise/University of Washington
“What if you could write in mid-air, for example, saying hello, and then send the text with a flick or a tap. That was our thought process,” Parizi said.

For gaming, the device allows someone to have a virtual reality avatar hand that mimics what they’re doing with their actual hand. For texting in crowded places, the user can point a finger and write in the air, then send that as a text using a flick in the device. Using a magnetic field also has the benefit of allowing finger tracking when hands aren’t visible.

The team realized that the ongoing tracking and sensitivity may be able to detect the onset of Parkinson’s disease by recognizing subtle hand tremors or assist in rehabilitation after a stroke by providing feedback on hand movement exercise.

More for You: Coronavirus Updates: Engineers to the Rescue

The project was not without challenges. The engineers focused on how to make the ring “super low power,” and the team did that by making it completely self-contained without any smart electronics and moving the sensing components from the ring to the wrist.

“If you think about all the smart things out there, they cannot send information continuously because they would run out of power. Our system because we are producing a magnetic field and are just measuring the magnetic field from the wristband can track continuously. There is no electric communication and no Bluetooth chip on the ring,” Parizi said.

“It’s all about super powers,” Parizi said. “You would still have all the capabilities that today’s smartwatches have to offer, but when you want the additional benefits, you just put on your ring.”