Drone Deploys in Just Minutes but Flies for Hours

Drone Deploys in Just Minutes but Flies for Hours 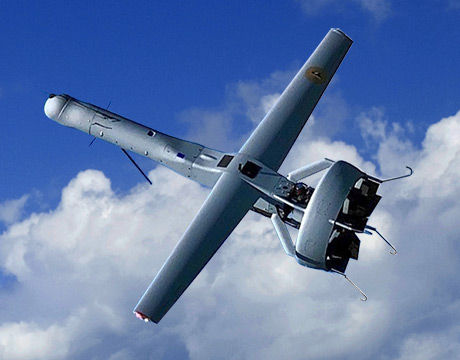 Martin UAV’s V-BAT autonomous military drone looks like nothing else in the sky. The composite aircraft consists of an 8-foot-long rocket-like fuselage with thin, 9-foot-wide wings towards the rear. Instead of a tail section, it has a large ducted engine.

This is V-BAT’s sole means of propulsion. Combined with its control system, it enables the drone to hover vertically, climb 500 feet, and transition seamlessly to horizontal flight. As it hovers near the ground, employees can shove it so it tilts. Once released, it straightens up and finds its original position.

V-BAT’s ducted fan is at the heart of the design, said Austin Howard, Martin’s engineering lead. Ducted fans mount spinning blades inside a cylindrical tube, or duct. The duct prevents thrust generated by the propeller tips from escaping.

“It sucks a whole lot more air through the duct than an unducted fan would, and provides about half of thrust in hover orientation,” Howard said.

The military funded several small ducted fan drones 15 years ago. They essentially placed a ducted fan in the center of a short, squat body. These drones worked like helicopters and had limited range. They fell out of favor when batteries improved enough to add electric propellers to airplane-style craft, enabling them to hover and fly.

By adding a fuselage and wing to the ducted fan, Martin found a way to extend the drone’s mission.

“We knew how to hover and fly on the wing,” Howard said. “The big hurdle was figuring out how to get the computer to go between the two.

“In the beginning, we figured we would point the noise down fast and it would go into a dive and we could then pull it out and fly horizontally,” he added. “In the past five years, we found there is a stable trim condition from 90 degrees nose up to 0 degrees horizontal.”

To take advantage of that stable region, V-BAT uses throttle, which controls thrust, and the duct’s eight control vanes, which vector thrust from the propeller in any direction. By measuring things like orientation relative to the ground, airspeed, ground speed, and GPS location, Howard learned to guide the V-BAT through the transition using closed loop PID controller and an autopilot system Martin built from scratch.

“We’ve been reliably transitioning for over five years now and have never had an instance of controller failure,” Howard said.

This reliability came at a cost. Martin could not find an off-the-shelf autopilot system to fly its unique aircraft. Instead, it has spent the past three years developing its own flight controller.

The V-BAT’s chief advantage is simplicity. It weighs only 65 lb (without fuel) and deploys in 30 minutes from a 20-square-foot space (since the duct protects operators from the propeller). It requires no catapults, rails, or nets to catch it when it returns. Yet it can cruise for eight hours at 45 knots/hour with an 8-lb payload in its replaceable nose section. Because it can land vertically practically anywhere, it can carry delicate cameras or instruments without fear of damage.

“The military wants radio and surveillance capabilities and a smaller footprint that they can deploy rapidly without airfield,” Howard said. “And it’s small enough to fit into helicopters and Humvees versus a C-130 cargo jet.”

Not only does V-BAT look like nothing else in the sky, but it delivers in ways most drones cannot yet match.

The military wants radio and surveillance capabilities and a smaller footprint that they can deploy rapidly without airfield. Austin Howard, Martin UAV