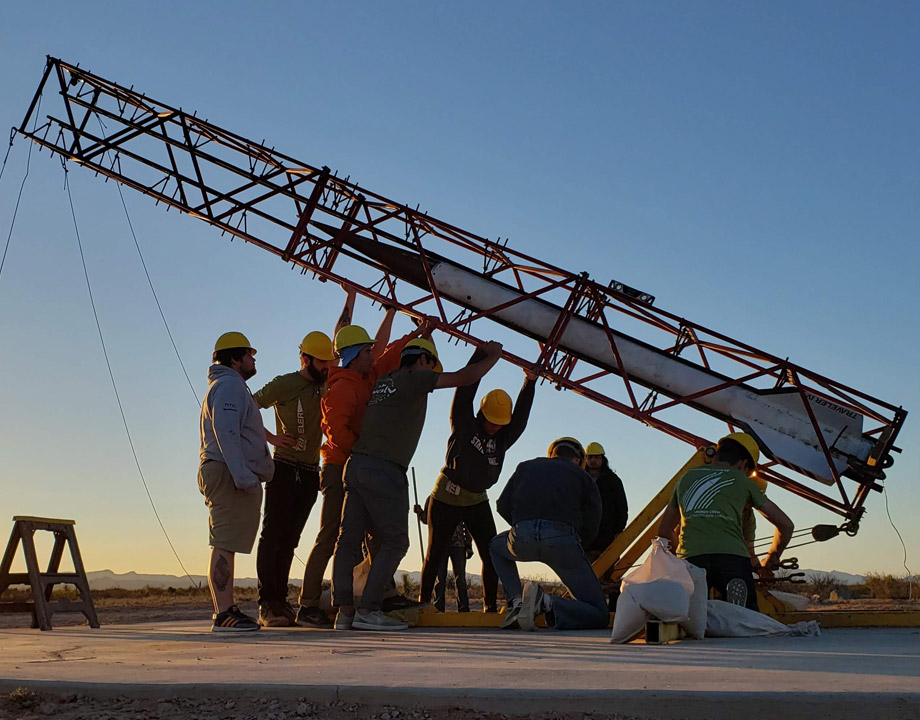 Students Aim Their Rocket to the Stars

Getting past the imaginary boundary that separates Earth’s atmosphere from what is considered space is not easy. This borderline is called the Karman Line, and NASA gives astronaut wings to pilots who get within 60,000 feet of it.

It took 14 years, but this past spring the University of Southern California’s Rocket Propulsion Laboratory (USCRPL) sent a 13-foot-tall rocket nearly 65 miles into the skies. The 11-minute flight most likely breached the Karman Line, then parachuted back to the ground. That would make USCRPL the first student club to launch a rocket into space and recover it.

“It was “a pretty insane goal for a student group, putting a rocket into space,” said Neil Tewksbury, lab lead and chief engineer for the team.

Such a feat required passion and a long-term commitment. It took five years just to line up the permits that would allow the club to try.

It was also slow going because the club’s core philosophy was to design and fabricate every part of the rocket themselves. This included the avionics, solid fuel, vehicle body frame, and even the cables. This enabled the club to optimize every aspect of the design and increase its chances of a successful launch.

“One our core philosophy is to design and build everything in house,” Tewksbury said. “That goes for our tooling as well as our vehicles. There’s a lot of folks out there who buy rocket motors, but we made it our mission to actually make our own propellant with our own formulation and machine our own nozzle. That is one of the most inspiring parts of our project.” 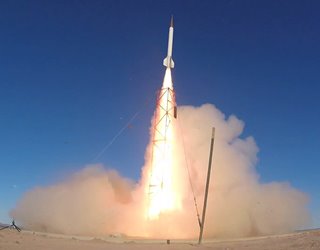 Launch of the Traveler IV would lead to a record-breaking height of 339,800 feet and flying at a top speed of 3,386 miles per hour. Photo: USCRPL
Over the past 14 years, graduating students passed along their knowledge and experience. This allowed the club to continue to innovate when early attempts, Traveler I and Traveler II, failed to reach the Karman Line.

After every launch, the students reviewed what worked well and what did not. Did the solid fuel perform as expected? Did the avionics provide the proper data and could they be trusted? Did the software perform properly?

After each evaluation, the team would compare performance with design goals, re-use whatever tech they could, and begin to innovate where they thought it was possible to provide a better solution.

Recommended for You: How Engineers Put Astronauts on the Moon

Early on, the main technological breakthroughs involved solid fuel propellant chemistry and motor kits. The case itself went through a lot of revision. They ultimately settled on a robotic filament wound carbon fiber motor case with a rubber liner and ablative nozzle to improve the case’s structural integrity during flight.

“In terms of manufacturing, we always start by making our motor case,” said Justin Mendelson, lead machining engineer. “That will hold up everything because we want to base everything around that case.

“Getting a flight-ready case used to be a tremendous ordeal for the lab three or four years ago. We have made a lot of cases for a few years, and we were just making cases every weekend. That got us to the point where we're confident in our manufacturing techniques and very confident in our qualification techniques.”

Once the team refined its process, it performed several successful static fire tests. 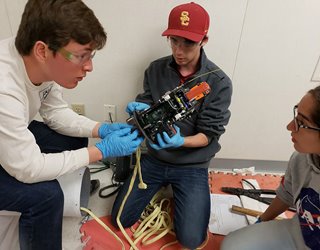 The USC recovery team preparing the avionics unit for the flight rehearsal. Photo: USCRPL
A large team focused on onboard avionic hardware and software, which was used to document the rocket’s flight and to prove that it crossed the Karman Line.

The club sourced some devices that it integrated onto circuit boards of its own making. It bought a BigRedBee BeeLine GPS, a self-contained unit that records GPS packets to nonvolatile memory and transmits those packets every 5 seconds over its resident 70cm RF band. It also sourced a Featherweight Raven 4 Altimeter, often used in amateur rocketry, which features a two-axis accelerometer and a barometric altimeter.

HAMSTER also included a NOR 16MB flash IC to record sensor data using the group’s RPL FlashLog encoded binary format, which includes a checksum with every data packet to confirm the data 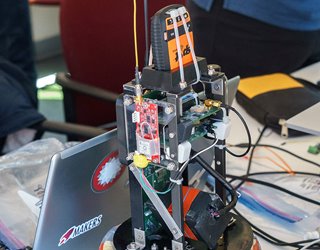 A view of the avionics package outside of the rocket’s nosecone. Photo: USCRPL
Important data from the Traveler IV was gathered in a redundant manner. There were four sources of altimeter data aboard the Traveler: two pressure-based altimeters (one on the HAMSTER PC board and one inside the Raven 4) and two GPS units that recorded altitude (one on-board the HAMSTER and the BigRedBee BeeLine GPS).

Although the club sourced some avionics, it integrated them into home-brewed circuit boards. The handmade nature of the avionics led to readout measurement errors caused by manufacturing defects, sensor placement on the printed circuit board, and other minor process variables. The students resolved these HAMSTER issues via calibration before flight. 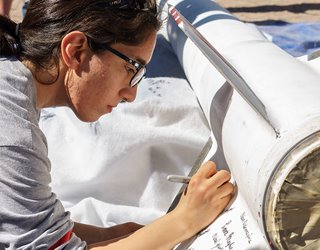 Team members signing the Traveler IV’s fins before its historic flight. Photo: USCRPL
On April 212, 2019, USCRPL launched Traveler IV from Spaceport America in New Mexico. It was a single-stage, solid-fuel rocket that reached an altitude of 339,800 feet and flew at a top speed of 3,386 miles per hour; over four times the speed of sound. It smashed the student rocketry record USCRPL’s Fathom II set the in 2017.

After their latest flight, the club went from recovery directly into design review. What they learned so far is that their recovered data will need some improvements before the next flight. The team is confident in their next steps, having mastered their qualification process over the years.

They already have several changes planned for the next iteration of the avionics unit. For immediate development, they’ll be increasing their polling frequency to improve the accuracy of the accelerometer’s position calculations (especially during entry interface). It expects to add an extremely high-fidelity accelerometer and inertial measurement unit to supplement the readings from the current sensor set.

Another element they are investigating is a different GPS hardware system because the standard consumer hardware they used proved unable to handle the extreme conditions of Traveler IV’s high-performance flight. Finally, the next rocket will most likely see a ground-based absolute position determination method being used, such as triangulation or radar tracking.

By taking all possible care to validate the collected data, tabulate it, and quantify all sources of error and uncertainty, the team is confident that Traveler IV crossed the Karman Line. Vehicle apogee was determined to be 339,800 feet ±16,500 feet AMSL (above mean sea level), higher than the Karman Line, which is at 328,064 feet AMSL.

The team has provided a 90 percent accuracy rate that Traveler IV is the first entirely student-designed and built rocket to have flown to space, as well as the first university rocket to be recovered from a space flight.

Terry Persun is a technology writer based in Port Townsend, Wash.