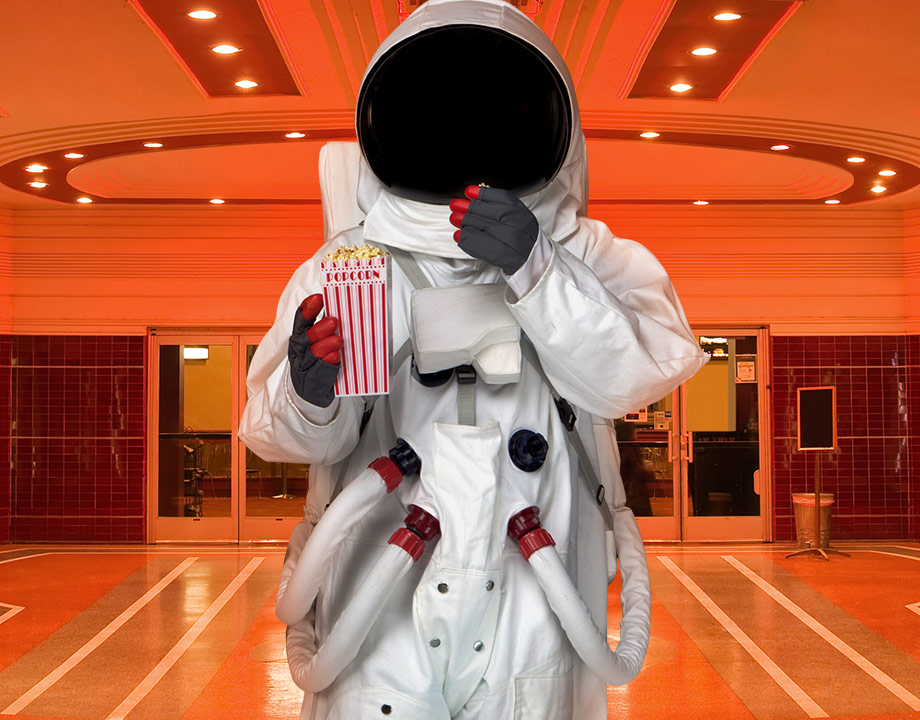 The filmmakers of the 20th century used a combination of science and imagination to create a future vision of space travel. At a time with many unanswered questions about the reality of space, movies depicting rockets and the Moon helped to spark the curiosity of audiences. Early films depicted outlandish theories of the Moon, based on fantastical theories such as aliens inhabiting the Moon’s craters or being able to breathe on the far side of the Moon. As our knowledge of space and astrophysics grew, so did the imagination of filmmakers and audiences alike. Mid-twentieth century films incorporated innovations like rocket technology and space suits while still pushing the boundary of imagination with nuclear-powered spaceships and living in space stations.

The best science fiction takes what we know and push the boundaries of what is believable. According to J. Bret Bennington, chair of the Department of Geology at Hofstra University and co-director of the “One Giant Leap: Apollo @ 50” conference hosted by the Hofstra Cultural Center and the Cradle of Aviation in Garden City, N.Y., what makes for good science fiction is fantasy based on truth. “Astronomers were trying to justify their conceits, and I believe the mark of a good science fiction movie is not that, that it's scientifically accurate but that it's believable,” Bennington said. “If you can find a hook of truth to hang your plot elements on, making it not just pure fantasy, then your audience will come along for the ride.”

Recommended for You: NASA’s Alien Tire 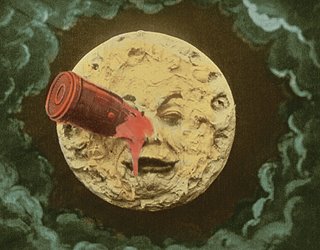 Cinema was less than ten years old when Georges Méliès directed, produced, and wrote A Trip to the Moon. The silent movie depicts a group of astronomers shooting themselves into space via a cannon—and includes the famous image of the spaceship landing in the Man in the Moon’s eye. Soon after their arrival, the Moon’s inhabitants surround the explorers, who flee by tipping the capsule over a ledge and dropping it into space. The French film, which drew inspiration from two of Jules Verne's classic novels, is now considered one of the greatest films of the silent era. The point of engineering interest is the method of space travel: the ship is a ballistic projectile, since the movie was made before the key rocket technology developments of the 1920s. 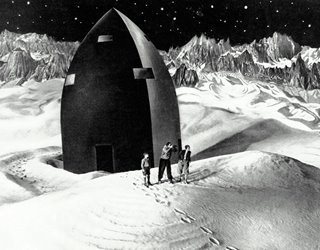 Fritz Lang wrote and directed Woman in the Moon two years after he made his famed Metropolis. The film shows a group of civilians attempting to reach the far side of the Moon in search of gold that can be mined and brought back to Earth. The movie ends with two crew members staying behind after the space ship suffers damage to its oxygen tank. Woman in the Moon is considered to be the first depiction of rocket technology on film. “What impressed me the most was the classic rocket ship design,” Bennington said. “The rocket ship makes a hard landing, creating a huge crater, and the entire crew survives this. Also, the depiction of the surface moon in this film is very similar to what was captured from the Apollo missions.” The movie also depicts weightless space travel, with the crew members using foot straps to move around the ship while in space. 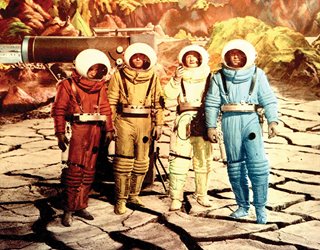 Based on the novel Rocket Ship Galileo by Robert A. Heinlein, Destination Moon is an attempt to realistically depict space travel. Unlike previous films, Irving Pichel’s movie accurately conveys the distance to the Moon (240,000 miles) and the need to travel more than seven miles per second to escape the Earth’s gravitational pull. Destination Moon focuses on “captains of industry” who create their own space program after government-funded projects are shut down. The launch of single stage atomic powered spaceship is done quickly to avoid both public protests and government intervention. While private space efforts seemed fanciful during the space race of the 1950s and 1960s, today companies such as SpaceX and Boeing have started to commercialize space transportation. 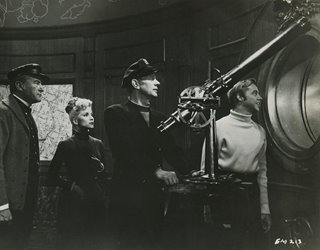 An adaptation of Jules Verne's’ novels From the Earth to the Moon (1865) and Around the Moon (1870), the movie tells the story of two industrialists—munitions producer Victor Barbicane and metallurgist Stuyvesant Nicholl—who accidentally invent a new ceramic material strong enough for space travel. The men fund the building of a spaceship and, accompanied by Barbicane’s assistant and Nicholl’s daughter, who stowed away, launch themselves toward the Moon. “I was surprised, particular in these movies before 1960 or that take place before the 1920s, how many of them involve ordinary people going into space,” Bennington said. “These aren’t highly trained specialists. The concept of the astronaut doesn’t come along until the 1960s.” Because the movie tries to stay faithful to its source material, it depicts ballistic projectiles, rather than rockets, as a means of space travel. 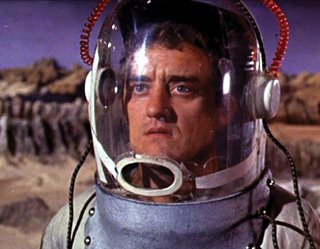 While many of science fiction movies are serious in tone, Richard Lester’s The Mouse on the Moon stands out as a comedy about the space race. (The next year, Lester would direct A Hard Day’s Night.) In the film, the small country of Grand Fenwick cons the United States and USSR to donate funds to its space program, while diverting the money to repair the royal castle’s hot water plumbing. By the end of the movie, Grand Fenwick’s lonely science officer, with the help from the Prime Minister’s son, builds a viable rocket using wine as fuel and blasts off to the Moon. When they arrive, the Fenwick explorers meet up with U.S. and Soviet astronauts, all of whom arrived at roughly the same time. The three nations try to claim the prestige of reaching the Moon first. “This movie is very tongue in cheek and plays on the political race to reach the Moon,” Bennington said. “The spacecraft is really interesting as it is one of the few to depict a multi-stage rocket with a separate lander.” 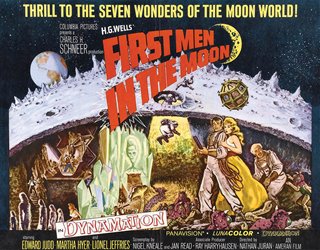 Based on the fantasy novel of H.G. Wells, First Men in the Moon tells the story of Joseph Cavor, inventor of a substance that can deflect the force gravity. Cavor applies his substance to a spherical spaceship, and along with two companions, heads to the Moon. On the Moon, the trio encounters an indigenous, insect-like species that inhabits subsurface structures. “This movie depicts the debate geologists had, prior to the data from 1960s orbital surveys of the Moon, of whether craters were impacted structures or volcanoes,” Bennington said. 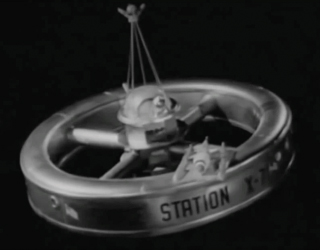 In this low-budget film, two astronauts return to Space Station X-7 after landing on the Moon and collecting geological samples. On the station, a fungus from the samples infects the crew and starts to spread. “The movie takes inspiration from the series of documentaries on space travel produced by NASA and Disney,” Bennington said. “The ‘big-wheel-shape’ look of the space station is based on early conceptual designs NASA had made at the time. This type of space station shows up again in 2001: A Space Odyssey.” While most of the action takes place on the station, the initial Moon landing scene depicts a craft similar to the future lunar module. 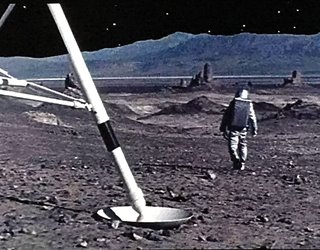 Previous movies had to make educated guesses about space technology, but Countdown was filmed in cooperation with NASA and used several pieces of existing Gemini program technology. The film’s premise is that, in parallel to the public Apollo program, NASA had a secret project to send a one-person spaceship to the Moon if it looked as if Soviet cosmonauts might get there first. The complication was that the single astronaut would have to spend a year on the lunar surface until a rescue mission could be launched. In addition to the hardware, one realistic element of the film was the political debate about who should be the first person to land on the moon. In the movie, the trained Air Force colonel is replaced by a civilian at the insistence of the White House. The next year, two Americans landed on the Moon: Buzz Aldrin was an Air Force colonel, but the one who first stepped on the surface—Neil Armstrong—was a civilian.