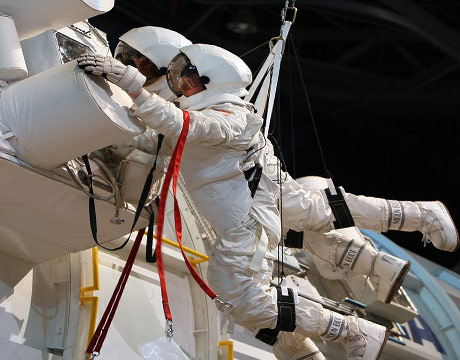 Think of camp and memories of tents, bug spray, and—more bug spray may come to mind. But for some young people, camp evokes memories of Neil Armstrong and Apollo missions. Huntsville, AL-based Space Camp has been giving kids a chance to dream about what’s out there for decades. So what’s it up to now?

“Space Camp has changed since it started in 1982 and it used to be a space shuttle-oriented program,” says Pat Ammons, director of communications for the U.S. Space and Rocket Center, where Space Camp makes its home.

The camp added International Space Station modules that are still a part of the program, says Ammons, highlighting that the campers learn about the science behind it. “We are moving away from our shuttle simulators and more into missions: Mission to Mars, lunar missions, and more. You always get to do the one-sixth gravity chair and always get the trainer that simulates tumbling in space. But what we really want them to come up with is why some of these different activities work. What’s the math, what’s the science behind some of this? It’s also about working together and problem solving. Looking at the real-world applications of what they’re learning in school.”

Ammons says campers also join illustrious company. Former campers include Bobak Ferdowsi, who was part of the Mars Rover program and works at the Jet Propulsion Laboratory, and Kathleen Rubins, a NASA astronaut.

What Is a Happy Camper, Alex?

11-year-old Aarav Zutshi attended the five-day program in Spring. “It was so much fun,” he says. “My favorite part was a game that was like Jeopardy! based on space, and the winning team got a badge that they could bring home.”

But beyond that game show-like moment, he found himself enjoying many experiences. “The biggest challenge was designing a space suit. We worked together as a team and I did the legs portion of the suit,” says Zutshi, whose hometown is Edison, NJ. Using Kevlar, metal, and more, he took great pride in the work.

He also felt a little change in the spring of his step. “I got to do the one-sixth gravity chair which was like being on the moon,” he says. “I thought it would be easy walking around but it wasn’t. I ended up doing the bunny hop.”

Camp also challenged him with rocket construction. “We were given a packet and had some wooden pieces and metal pieces and there were instructions to build a rocket,” he says. “We also had a parachute but we didn’t want it to burn so we put padding on there. Ours got stuck in a tree because it went really high.”

The U.S. Space and Rocket Center also has a robotics camp offering activities for air, land, and water robotics and focuses on entrepreneurism. Campers are shown how to develop an idea and take it into the business world, Ammons says.

Ammons says another positive is that Space Camp brings young people together from all over the world. “There are so many different backgrounds coming together and there can be great bonds that can take place,” she says. “Space Camp opens you up to possible new experiences on many different levels.”

Having spurred kids’ imaginations for over three decades, Space Camp continues to inspire young people to dream of a future in space.

For Further Discussion
We are moving away from our shuttle simulators and more into missions: Mission to Mars, lunar missions, and more.Pat Ammons, U.S. Space and Rocket Center