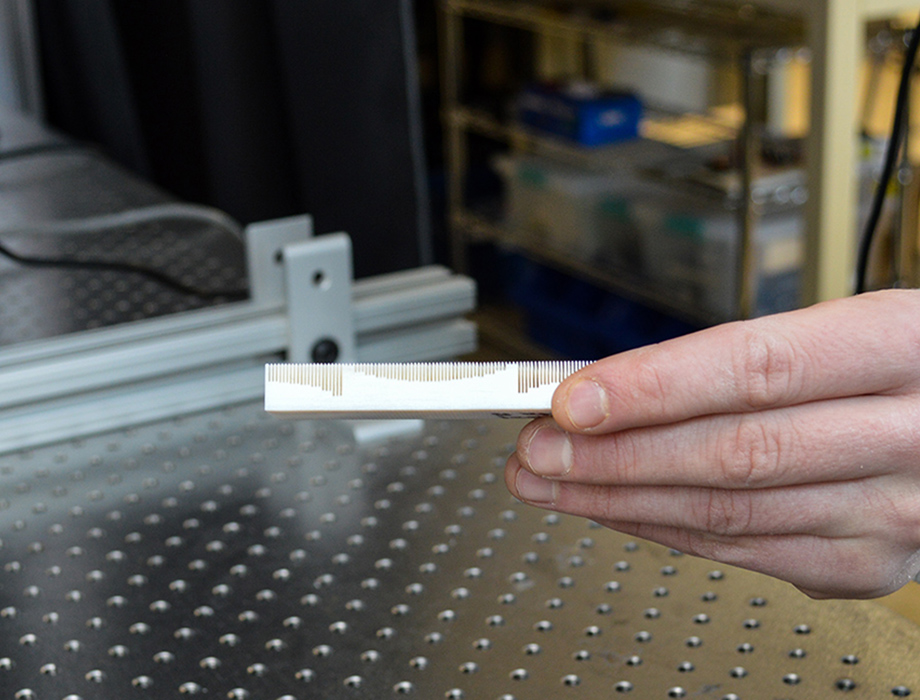 Researchers at the University of Minnesota develop a way to move objects through use of ultrasound waves and metamaterial patterns.

Image Credit:
Olivia Hultgren
Science fiction made famous the tractor beam, pulling and propelling objects of all kinds. New research out of the University of Minnesota is creating such effects in real life—albeit without the fancy lights and sound effects. Mechanical engineers have developed a way to contactlessly manipulate objects that have metamaterial patterns on their surface by using ultrasound waves, thus applying principles of metamaterial physics.

“Waves carry energy, they carry momentum and they can use that to move things,” explained Ognjen Ilic, senior author of the study and the Benjamin Mayhugh assistant professor in the University of Minnesota Department of Mechanical Engineering. “We started doing some research on how that can be done with light. Then we saw that a lot of similar physics apply to sound as well.”

The concept of contactless manipulation using light waves is a known area of research, but hasn’t been experimental yet, added Matthew Stein, first author on the study and a graduate student in the University of Minnesota Department of Mechanical Engineering.

That simplicity involves using a 3D printer to create blocks with metamaterial patterns on the surface. Application of a 20-kilohertz (kHz) ultrasound wave then makes the block move in different directions from the radiation source depending on the metamaterial pattern and angle at which the wave is applied.

Metamaterials are artificially engineered to have properties that don’t come from the natural chemical composition of the material, Ilic said.

“It comes from its structure or patterning on the scale that is going to be smaller or comparable to the wavelength of sound,” he said. “What we do is we put these very fine features, so it still looks like a slab, but it has this surface pattern, and now it can steer and refract light and sound, and it can do all the things that just the regular material by itself wouldn't be able to do.”

In other words, the object is independent of its overall geometry, Stein said. That means sound would interact with that overall geometry differently if it didn't have those kinds of patterns.

While the concept of acoustic manipulation isn’t new, “this is a very early-stage type of research,” he said. “This macro-scale manipulation with acoustics has never been done before.”

Given the wavelengths of sound at 20 kHz to 40 kHz, an object would usually have to be just a few millimeters to be actuated by a wave alone. “The reason why there was this fundamental constraint of something smaller than a half the wavelength is because that's where you can kind of create these stable forces typically,” Ilic said.

Become A Member: How to Join ASME

When using metamaterial patterns, this limitation no longer applies, he added. “Here we used 20 kHz, but the actual size of our object is maybe 2 inches, which is way bigger than a wavelength,” he said.

A key reason the 20 kHz ultrasound was chosen because it’s inaudible. “If we were maybe 10 kHz or in the audible range, this would be contactless actuation, but it would be kind of an irritating actuation,” Ilic noted.

The team is also looking at higher frequency waves, 40 kHz or even higher, but the higher the frequency, the smaller the wavelength, and thus, the smaller the metamaterial features need to be to have the same effect, Ilic explained. 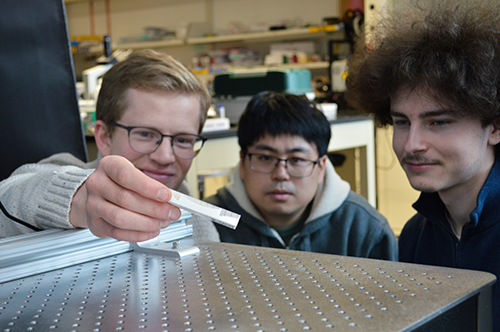 University of Minnesota students Matthew Stein, Yujie Luo, and Sam Keller interact with an object that has a metamaterial surface in the University’s Laboratory for Nano Optics and Mechanics. Photo: Olivia Hultgren
“That means that with standard 3D printing that's so easily accessible, we might not be able to get that resolution if we went to higher frequency ultrasound. We just have to use more sophisticated ways to make these structures,” he added. “So, 20 kHz is perfect balance between it's easy and cheap to 3D print and prototype, and we can't hear it.”

Researchers are excited about the potential for this technology to be used in robotics or even medicine, since it provides a way to move objects without the need for an onboard energy source or wires since the signal and energy come remotely, Ilic explained.

“It could be useful in manufacturing, contentless picking and placing of objects, if it's a particularly sensitive process where you don't want to physically attach any tethers or connections to it,” he added.

Although this method would require any object that needs to be actuated to have metamaterial patterns on its surface, Ilic noted that could be accomplished by 3D-printing a film and attaching it to an object’s surface without having to change the object’s composition.

Test Your Knowledge: What in the World are Metamaterials?

The University of Minnesota team has only used one kind of metamaterial pattern so far, but there are an infinite number of patterns in which a metamaterial response could be encoded, Ilic said.

“Theoretically, something I think would be cool is have a frequency that's designed to propel an object in a direction and have another frequency that's designed to spin that object,” Stein said. “So now you can actually drive that object wherever you want because you have rotational motion as well as translational motion. So, there are fun directions you can take this.”

While the lights and fancy sound effects of sci-fi tractor beams may be a thing of the imagination, metamaterial physics may just be the way to realize a version of such tech in the real world. Article
Is It OK to Not Want to Move Up the Career Ladder?
Job promotions acknowledge success and recognition, but they can take you away from the work you love. Some employees are content and successful in their current role. There are many ways to contribute without climbing the corporate ladder.