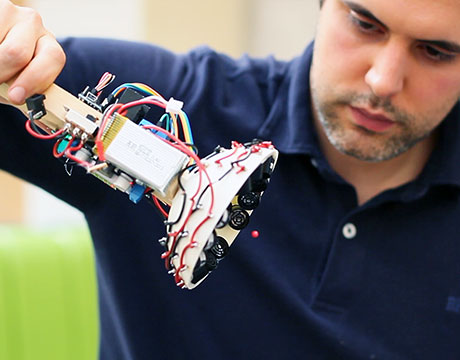 Levitating with a Tornado of Sound Waves

How do you keep an object suspended in the air—in defiance of gravity—without magnets, fans, or advanced yogic techniques? Try an acoustic tractor beam with virtual vortex.

That’s what Asier Marzo, a research associate in the University of Bristol’s mechanical engineering department, has created. With it, he’s managed to suspend the largest object ever levitated by acoustic means: a polysytrene ball eight tenths of an inch wide. The technique may someday help cushion delicate items on the assembly line or direct drugs to specific sites within the body.

Marzo is not the first to try levitation with sound waves. Previous researchers have used ultrasonic speakers to create a kind of tornado of sound; a particle in the eye of that acoustic storm would get pushed to the center. The only problem was that the swirling vortex would also put enough spin on the particle to send it flying.

What we did was to change the direction of the tornado so fast, every millisecond, that the particle does not have time to react to this rotation.Asier Marzo, University of Bristol

“What we did was to change the direction of the tornado so fast, every millisecond, that the particle does not have time to react to this rotation,” Marzo says. “We call this phenomenon virtual vortex, since it has the large aperture of the vortex but it does not transfer rotation and thus it is stable.” 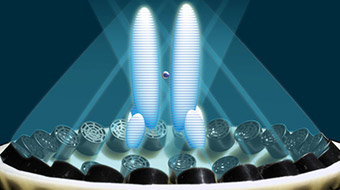 The sonic tractor beam is able to levitate objects through the power of sound waves. Image: Asier Marzo

The trickiest part of the project was the mathematical modeling. “How sound waves transfer rotation to particles is still not fully understood, so we did our best to get a model that was in good agreement with the experiments,” Marzo says.

But the actual device is a cinch to assemble. The sonic twister uses hundreds of cheap ultrasonic speakers in a phased array. Each puts out 120 decibels at 40 kilohertz. Anyone that would like to build their own can learn how from his DIY video.

The word “levitation” causes most imaginations to conjure images of humans hovering above the ground. Though theoretically possible, Marzo feels that acoustic levitation is not suited for humans.

“You would need around 165 decibels to levitate a human, and even at 40 kilohertz it is not recommended to surpass 145 decibels,” he says. “I think your eardrums will burst and you skin will start to heat up. Also, you may have problems breathing.”

Marzo has more practical applications in his sights. He’s creating a device that would work through the body to move drugs to where they are needed. There is little “acoustic contrast” between blood, muscle, fat, and other tissues.

“Ultrasound will travel through them without reflecting,” Marzo says. “On the contrary, the drug capsules will reflect this sound and be subjected to the radiation forces.”

Also for You: Engineers Break Down Borders

On an assembly line, delicate components could be held in the air without cushioning. At the moment Marzo is working on controlling not just the levitation of objects, but their orientation as well.

“For instance, in the assembly of printed-circuit-boards, controlling the orientation of the tiny components is a vital requirement,” he says.

Marzo hopes to eventually create shapes of suspended particles using a kind of acoustic hologram. The speakers would be arranged in a 2D plane, but by controlling their phases he could create 3D sound fields.