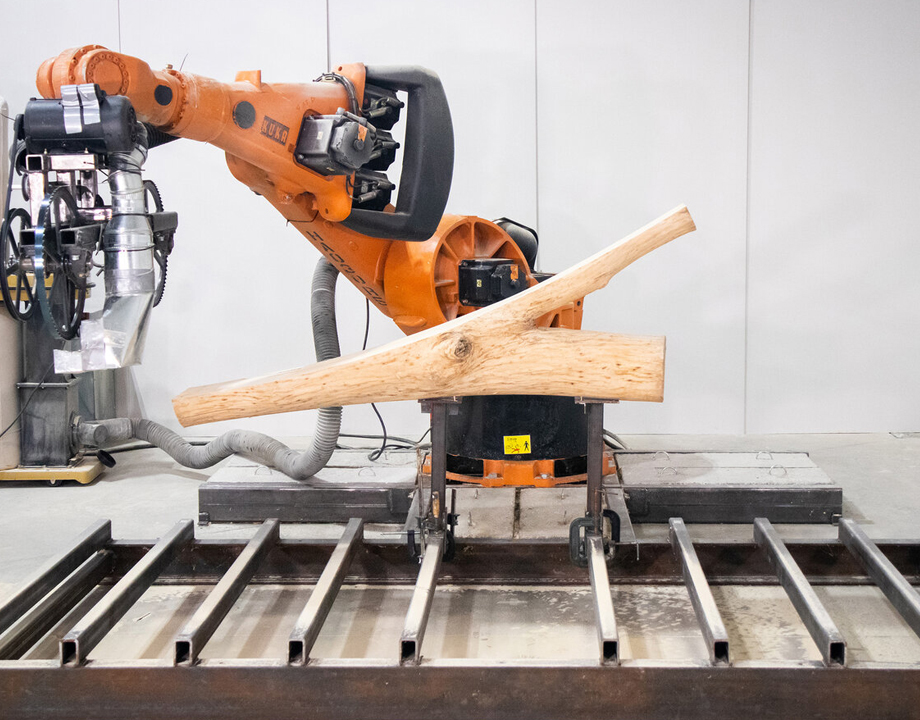 Advanced Manufacturing Building Construction Building Equipment Contractors Oil and Gas Extraction Robotics
The emerald ash borer is a menace. The iridescent beetle, first found in Michigan in 2002, has been spreading through American forests ever since, leaving swaths of dead ash in its wake. The larvae eat the inner bark of the trees, destroying their ability to transport water and nutrients and killing them in the process. Due to their irregular shape, ash trees that fall victim to the deadly insect have little use in construction. Most will end up as firewood.

When the bugs arrived in Ithaca, N.Y., home to some 100,000 ash trees, Leslie Lok and Sasa Zivkovic, both professors of architecture at Cornell University there and co-principals of the design firm, HANNAH, wanted to do something about it. “We realized there were all these dying ash trees at our doorstep,” said Zivkovic. “Given the urgency of the problem, we wanted to act.”

Zivkovic and Lok had a robotic arm—one that once assembled cars in a General Motors factory—that they used for 3D printing structures in concrete. Though it still runs on Windows 95 and uses floppy disks, the robot is versatile thanks to the many open source plug-ins that have been written for it. Lok and Zivkovic realized they could put the arm to use carving up ash logs. 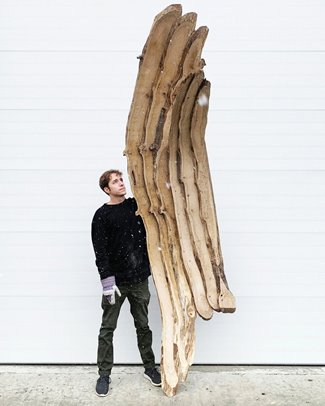 Robotic bandsaw cutting is paired with high-precision 3D scanning to slice bent logs from infested ash trees. Photo: HANNAH
But rather than trying to come up with a standardized board, they decided to take advantage of the trees’ curves and twists. They designed a cabin that would feature, rather than hide, the irregularities offered by ash. “We went out to the forest and looked at different trees,” explained Lok.

“We already had a kind of general design, knowing that we would need a fork or a log that kind of curves. We had a general idea of the inventory.”

That inventory was cut down to manageable pieces, each of which was scanned. With the imaging in place, the pieces were sliced with precision by the robot, with the bends and swerves demanded by the design of the cabin.

Recommended for You: Solving World Hunger with 3D-Printed Food

The resultant structure is an organic piece of art that sits on 3D-printed concrete legs. But more impressive than its beauty is the revolutionary potential it suggests.

With tens of millions of ash trees already dead, and eight billion at risk, there is plenty of material available if the construction industry can turn slightly away from standardization and toward a kind of organic mass customization.

The technique of scanning and sawing by robot needn’t be limited to architects with one-off visions. Though the construction industry has proven slow to adopt automation and newer technologies, Lok and Zivkovic’s method has shown that the way we use materials could be transformed quite simply on a larger scale.

You May Also Like: 6 Advances in 3D Bioprinting of Living Tissue

“We can scan the whole forest and leverage the intelligence of the whole forest,” said Zivkovic. “We can design a building that performs better and uses less materials that makes sense with the materials that we already have naturally. That would require computation, digital fabrication, and a whole new process chain. I do think that’s a radical future vision, but one that maybe we ought to pursue.”