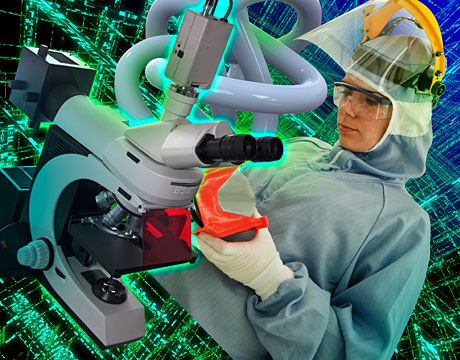 Assembled marvels abound and astound. But the fundamental elements that make up any engineered piece of technology, be it a mobile gizmo or an arm on a Mars rover, are often just as marvelous as the whole of which they are a part. Here, we examine five areas that are likely to have a radical impact on the products of the future.

Graphite’s nice. You can write with it, or make squash rackets. But it’s even cooler when it’s wickedly thin. In 2004, researchers used Scotch tape to pull up layer after layer until there was only a single-atom layer left. Since then, others have come up with more efficient—and more advanced—methods for making atom-thick sheets, called graphene. The honeycomb lattice of carbon-to-carbon bonds has some pretty remarkable properties. It’s flawless, light, and strong. It’s flexible, can be bent into any shape, can carry a charge, and it won’t oxidize.

The potential applications are many. “People are putting graphene in polymers, ceramics, and metals,” says Nikhil A. Koratkar, professor of mechanical, aerospace, and nuclear engineeringand materials science and engineering at Rensselaer Polytechnic Institute. “Researchers are trying to make gas sensors that can sense down to very low concentrations—at the parts per trillion level.” They’re also using graphene to create coatings that would make any metal rust-free, windows that would darken themselves when the sun is at its strongest, anodes for lithium-ion batteries, flexible solar cells, membranes for fuel cells, and membranes that would remove salt from water.

3-D printing is upending many a field with the speed at which a single part can be dreamed up and created. But right now, the things that come out of a 3-D printer are largely inert. “There is vast interest in 3-D printing, but most of the commercial printers developed to date are used to produce plastic prototypes,” says Jennifer Lewis, a professorat the School of Engineering and Applied Sciences at the Wyss Institute of Biologically Inspired Engineering. “Conductive inks would enable the integration of electrical circuits not only on planar substrates, but within 3-D printed objects. One can imagine ‘wiring’ up 3-D objects to create an ‘internet of things.’” The ink would allow the masses to print their own circuit boards. Antennas, solar cells, LEDs, and other electronics could come hot from the printer when and where they are wanted.

3. The Heroics of Multiferroics

Magnetism and ferroelectricity usually don’t show up in the same material at the same time. Certain materials, though, particularly metal oxides, can exhibit both. An electric field will alter the magnetic state, and a magnetic field can alter the electrical polarization. “This allows us to store data using an electric field, which is much easier to generate than a magnetic field,” says Caroline Ross, a professor in the Department of Materials Science and Engineering at MIT. But with the magnetic state still present, data can still be stored magnetically. “Additionally, the discovery that electric currents can flip the magnetization of small structures, or translate magnetic domain walls, is exciting for data storage and there are already ‘spin-torque switching’ magnetic memory cells being manufactured.” says Ross.

“A major challenge in improving the energy density of lithium-ion batteries is the development of electrode materials increased lithium capacity,” says Jeffrey Fergus, professor at the Materials Research and Education Center, Auburn University. The search has long been on for a better anode that will “maintain that high capacity during cycling and in a wide range of environmental conditions.”

Silicon has been a contender for some time, thanks to the fact that it’s cheap and highly conductive—they have a much larger capacity than the standard carbon ones in use today. Unfortunately, silicon expands when lithium hits it. “This expansion can generate large stresses, so creative geometries or combinations of materials are needed to accommodate these large strains,” says Fergus. Researchers at the University of Southern California may have found both. They used silicon spheres mixed with boron and etched pores onto them. The result is a battery that holds three times the energy and can be charged in ten minutes. So what’s holding them back from getting into electric cars? So far, the batteries are good for only 200 or so cycles.

Talk of nanotubes has been batted about for years. The promise of an incredibly strong, light thread was always just around the corner but never realized. But last year researchers at MIT came out with their nanotube pencil. With a tip of compressed nanotubes, it allows the user to sketch nanotubes wherever he might want them. Great for making sensors, but not quite what we need to lift things into, say, space.

Now researchers at Rice University have finally managed to make a nanotube thread. It’s long enough—and flexible enough—that they’ve wrapped fifty meters of it around a spool. The trick was putting nanotubes in chlorosulfonic acid and drawing them out through tiny holes. The resulting thread is ten times as strong as steel. And it’s as conductive as copper. “Spinning smoke” is what David Burleigh, a professor in the Materials and Metallurgical department at New Mexico Tech, calls it. “In theory we should be able to build the space elevator, an elevator to a geosynchronous space station.”

Researchers are trying to make gas sensors that can sense down to very low concentrations—at the parts per trillion level.Nikhil A. Koratkar, Rensselaer Polytechnic Institute