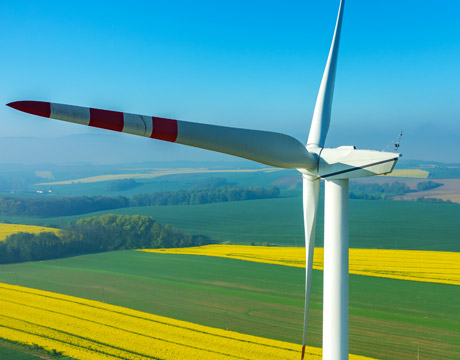 Hexcrete concrete panels could be arranged in a variety of patterns to allow for taller wind turbine towers. Source: Iowa State University

Moving the building blocks for a 262-foot-tall wind turbine into place is no small feat. Usually, components like turbine blades and steel towers make their way along an Interstate late at night and area drivers are encouraged to stay off the roads during that time, as the oversized loads move through on specialized trailers.

The towers are manufactured and transported in three long segments with a base diameter of approximately 13 feet, just under the vertical clearance allotted on state highways. However, modularizing steel tubes that require vertical seams in the field is expensive and demands a high degree of quality control, says Sri Sritharan, an Iowa State University professor of civil, construction, and environmental engineering and a member of the university’s Wind Energy Initiative.

With those restrictions placed on them, the wind-turbine towers can’t reach more than 262 feet, or 80 meters. Yet, while the U.S. installed wind energy capacity has grown by 31 percent over the past five years, the wind industry has mainly introduced bigger turbines and longer blades to help harvest more energy. Tower heights need to grow for increased sized turbines and blades, Sritharan says.

Towers taller than 262 feet would allow access to the higher wind speeds and steadier conditions that would increase wind production time in the parts of Europe and the U.S. where wind the wind blows at heights above 100 meters, or around 330 feet, and electricity demand is relatively high, he adds.

“The transportation limit hindering the increase in tower height clearly shows that a new technology is needed, since such a limitation has not prevented other civil infrastructures to continue to reach newer heights and lengths,” he says.

The Hexcrete system is comprised of two different classes of concrete building blocks: precast columns and panels made from either high-strength or ultra-high-performance concrete. The columns and panels are transported onsite, then stacked vertically in hexagon-shaped cells that are tied together by cables. They can be stacked vertically to form towers, Sritharan says.

The cells can be stacked in various arrangements, according to the goals for the tower, he adds.

When arranged in various configurations, the modular concept allows for four or five times greater PSI as compared to the 80 meter towers common today, he says. That’s because the high-strength concrete can withstand pressures at up to up to 13,000 pounds per square inch while the ultra-high-performance concrete can handle up to in 26,000 psi without damage, allowing them to be built higher and withstand greater pressures.

The Hexcrete modular tower-construction method will allow semi-tractor trailers to convey the tower components, which can then be constructed on sites to attain heights of up to 460 feet, Sritharan says. That would eliminate the need for expensive specialized trailers that now carry steel towers, cutting turbine construction and wind production costs in the process, he says.

With the new construction method, the tower base could be built wider than 4.1 meters—currently not done due to transportation issues—to allow for even taller towers, he adds. The tower’s height could also be raised by increasing its column and panel dimensions, or by combining that increase with a larger-sized base, Sritharan says.

Another bonus: unlike steel, concrete is widely available across the United States, which makes for shorter transport routes and reduces costs, he adds.

Researchers in Iowa State’s Structural Engineering Research Lab recently tested the tower technology with an actuator that rocked a 12-foot-high and 6.5-foot-wide test section with 100,000 pounds of force every 1.25 seconds. The test section’s two panels and two columns only moved a tenth of an inch. Strain and displacement sensor data returned showed no undue cracks on signs of wear on the test section, Sritharan says.

Meanwhile, experiments done at the University of Minnesota's Multi-Axial Subassemblage Testing (MAST) Laboratory, which runs earthquake engineering simulations, found the tower could withstand the extreme wind turbine tower loads tested. Engineers took data to see if the assembled tower pieces would hold up under the loads and whether they’d transfer the load from piece to piece and act as a single unit, he adds.

The tower cross section had no trouble resisting the loads.

The fatigue test is ongoing with no damage detected after nearly 200,000 load cycles, he adds.

“It’s fair to say these tests were a success,” Sritharan said. “I think we’ve made great progress in validating a new concept of using prefabricated concrete for taller wind turbine towers.”

Next up for Sritharan and his fellow researchers: building a full-scale tower in the field.