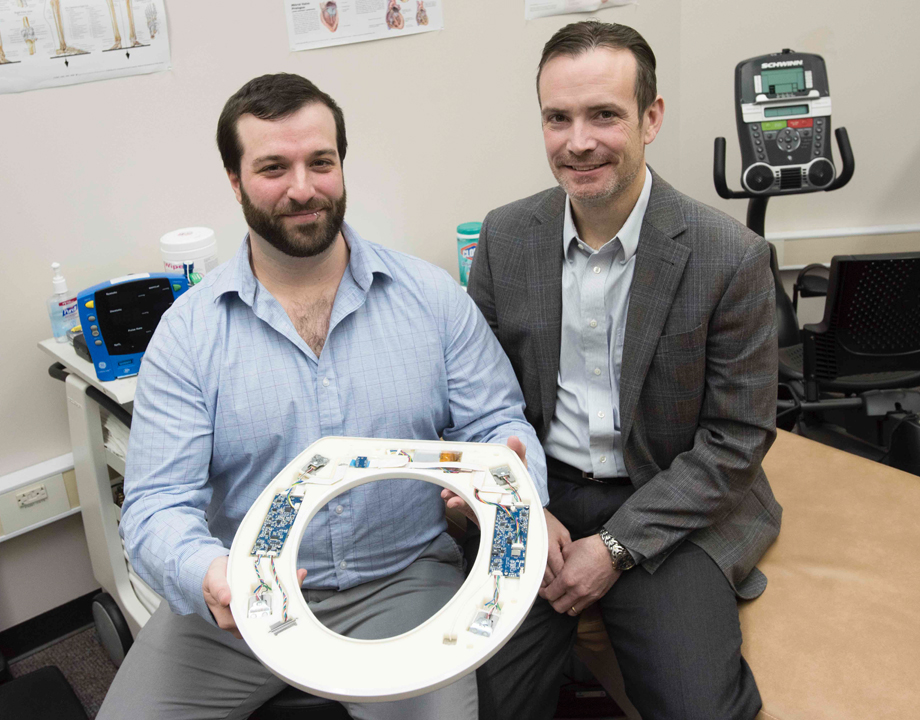 After years in development, a toilet seat-based home cardiovascular monitoring system is close to fulfilling its developers vision of improving the quality of life for heart disease patients.

The Heart Seat, as it is called, consists of a toilet seat and a monitoring system integrated into the seat. Envisioned by Nicholas Conn as a Ph.D. candidate in engineering at Rochester Institute of Technology and his advisor David Borkholder, the battery-powered system consists of biometric sensors, user interfaces and artificial intelligence to track biosignals, then collect and analyze the data that can be sent wirelessly in near real time to a health care professional. Sensors capture a number of clinically relevant measurements including electrical activity of the heart, blood pressure, blood oxygenation levels, mechanical forces associated with the cardiac cycle, stroke volume (the amount of blood pumped at each beat) and body weight, which can often serve as an early warning of deterioration of a patient’s condition.

After earning his degree in 2016, Conn continued to work on the project as a post doc at RIT and in 2018 formed Heart Health Intelligence (HHI) to commercialize the seat. He now serves as the company’s chief scientific officer. The hope is that by the middle of next year, the seat will have enough good results from new broad scale testing to apply and receive Food & Drug Administration clearance to market the seat. 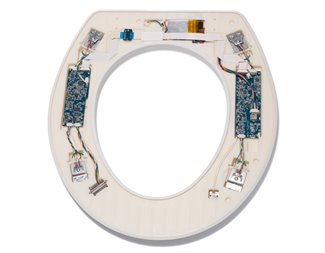 Battery-powered system has biometric sensors, user interfaces and artificial intelligence to track biosignals. Photo: A. Sue Weisler, Rochester Institute of Technology.
This testing will expand and build upon earlier testing on a small group of people which demonstrated that the system was capable of providing clinical-grade measurements.

“One of the goals that Nick and I had [from the start] was to provide a system that has scientific rigor so that it could have clinical significance,” said Borkholder, who is taking leave from RIT to serve as HHI head of research and development after deciding in October “that it was the right time for me to shift from academia into industry.”

Conn added, “It’s really important for us to…demonstrate to the healthcare community that our information is of clinical grade accuracy” and that the technology is reliable enough for physicians to use as a day-to-day tool for clinical decision-making and management of heart patients.

From the start, both Conn and Borkholder envisioned the seat as a way to begin bringing clinical grade medical devices into the home using sophisticated, state-of-the-art technologies. “We knew early on that this had so much potential to help people and to empower physicians to better manage patients,” said Conn.

They also knew they had a number of technical challenges. “One simple example is the electrocardiogram that is normally measured with wet electrodes on the chest,” Borkholder said. “People also do that today with dry electrodes in wearables but you are usually doing that on the arms or the fingers. When you shift down to the buttocks to measure, the signal strength is significantly smaller. This form factor has a lot of advantages but then there are a lot of technical challenges we have to address with innovative engineering.”

One big advantage of the seat, even though it’s completely unattended, is that it can assure adherence since the seat requires no change in a patient’s behavior or habits. Compliance is often an issue with nonimplantable health monitoring devices used at home or are wearable. 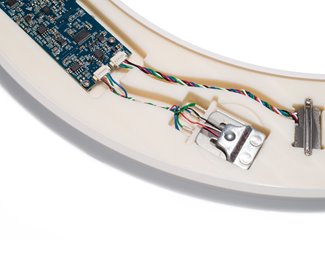 Sensors capture a number of measurement including electrical activity of the heart, blood pressure, blood oxygenation levels, and more. Photo: A. Sue Weisler, Rochester Institute of Technology.
However, Conn added, there are still technical challenges to overcome because of varying degrees of quality in signals since different people may sit on the seat in different ways and those are being addressed with innovative algorithms.

They saw heart disease as a good place to start begin bringing clinical-grade medical devices into the home because of the huge costs associated with heart failure. Conn noted that heart failure affects approximately 6.5 million Americans with close to 1 million new cases diagnosed each year, costing about $35 billion annually and rising. The goal is to reduce hospitalization, which accounts for approximately 80% of the total cost.

More for You: Tubular Robot Maneuvers through the Body

Down the road, HHI is viewing the seat as a hub around which a lot of other healthcare systems can be built. One overarching principle for any products and systems they develop is that gathering the data must be effortless, Conn emphazised.

“In the future we are going to be providing a comprehensive home healthcare system that can shift the general care that patients receive into the home so that we can reduce the health care burden at clinics and hospitals,” Borkholder said. “The way health care today is practiced is very episodic. "[Patients] go to the doctor; data is taken and that goes into the record so over time the doctor is trying to understand what’s happening to the patient. We are going to fill in data in between those visits with a comprehensive suite of measures so the physician has that broad view… and a full picture of that patient’s health.”