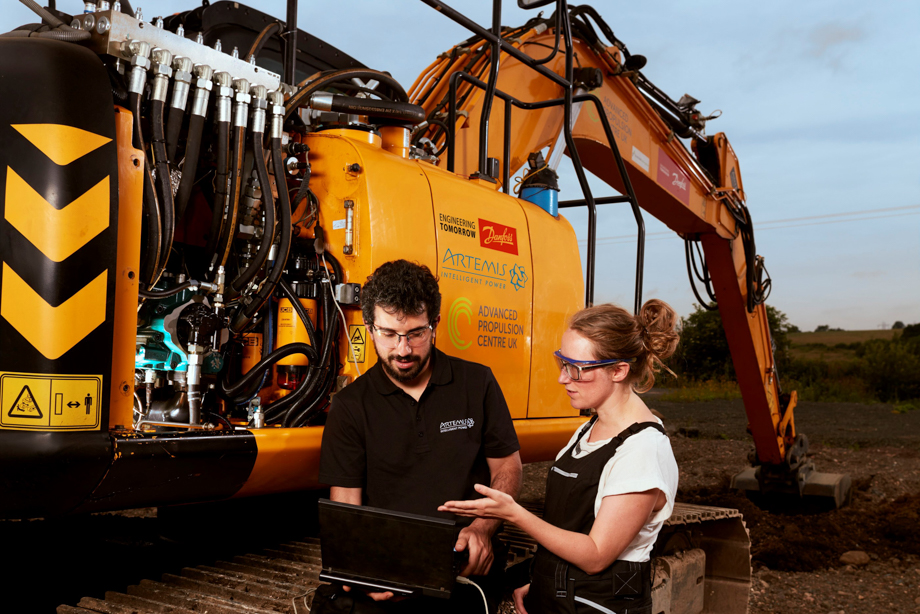 The Forefront of Electronics & Fluid Power

Even though they have been in use for hundreds of years, fluid power systems—especially hydraulics—started becoming a major driving force in the industry in the early 20th century. Explosive growth occurred during and following World War II, and a recurrence of technological growth began in the 1990s—one that continues today.

The integration of electronics has spearheaded much of this growth into components and systems, moving from analog to digital electronics to network and wireless communication. However, technological advances in hydraulics and pneumatics technologies themselves have begun reshaping the face of fluid power.

Mobile equipment used in the construction, mining, agriculture, and waste & recycling industries represents the largest sector of fluid power technology. Hydraulics has been used in virtually all heavy equipment for roughly 70 years, attributable to the tremendous forces and torques the technology can generate while also offering simple, versatile control. More recently, the incorporation of electronic sensors and controls adds a degree of automation to the equipment that boosts machine productivity and efficiency while reducing the skill level and experience required to operate machines safely. 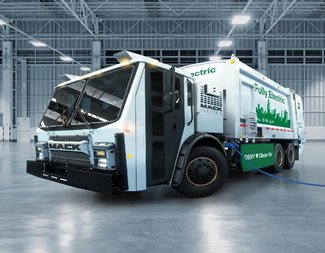 The Battery Electric Vehicle from Mack Trucks is powered by four NMC lithium-ion batteries driving two 130-kW motors instead of a diesel engine. The truck is modified version of Mack’s LR model, and the packer assembly is a standard Heil DuraPack 5000 body. Photo: Mack
The last ten years have brought about advances that improve hydraulic performance and efficiency by controlling hydraulic pump output electronically, rather than with pressure-based control. Functions such as load sensing, power limiting, and flow sharing can now be monitored and controlled to match the output of the pump to the ever-changing load demand of the machine. This reduces fuel consumption and emissions of the device while also improving productivity or performance.

Probably the most recent example of how electronic sensors and controls can be designed into key components is the Digital Displacement Pump (DDP). When driven at a constant speed, conventional hydraulic pumps regulate flow by varying their displacement. This is usually accomplished with a cam ring, swashplate, or similar mechanical device.

Developed by Artemis Intelligent Power, a subsidiary of Danfoss Power Solutions, the basic DDP consists of radial-piston pumping chamber modules that can be combined into the required maximum output—24-, 48-, 96-cc/rev, for example. A solenoid valve at each pumping chamber opens or closes to control output—much like pulse width modulation can control the power output of an electrical device.

Because each pumping chamber is controlled individually, pump displacement is electronically variable, resulting in a precise and highly responsive output. By using only as many pistons as required to meet the demand, the DDP has high efficiency and low idle losses across a wide operating range. Although the DDP has been widely tested in mobile equipment, Danfoss officials point out that stationary (industrial) equipment can also benefit from higher efficiency.

On another front, mobile equipment is now entering the market that uses variable-speed electric drives to power the entire machine. Typically, one or more electric motors power the ground drive to propel and brake the vehicle. A separate drive powers the hydraulic system. Output torque, speed, and power of the electric motor regulate pressure and flow output of one or more hydraulic pumps. The result is that the hydraulic pump transmits only that power required to perform the specific tasks at hand. By incorporating load sensing, flow sharing, and other hydraulic control functions, the machine can perform multiple tasks simultaneously without sacrificing the controllability or productivity of any single function.

The big news on the factory floor and in the marine industry is that energy-saving controls have made hydraulic systems more efficient, quieter, more compact, and even more reliable than ever. Computer-aided design has led to reduce energy losses and noise in components. Moreover, variable-speed electric drives powering hydraulic pumps are replacing variable-displacement pumps driven by fixed-speed motors. 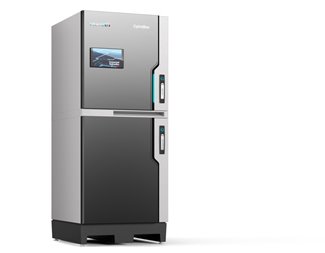 Bosch Rexroth’s Cytronix drive is an all-in-one hydraulic power unit incorporating all crucial and auxiliary components within a sound-deadening enclosure. Photo: Bosch Rexroth
Some of the most dramatic energy savings can be found in cyclical processes requiring considerable dwell periods. For example, die-casting and injection molding often require high pressure at a high flow from the hydraulic system for a short period. Most of the cycle requires holding pressure constant with little or no flow. In a conventional machine, the electric motor driving the hydraulic pump runs continuously, even though little or no work is performed.

The variable-speed electric pump drive, however, uses feedback sensors and control logic to determine when these dwell cycles occur. They respond by reducing motor speed and torque to only that required by the system. Reducing energy consumption by 30 percent or more is not uncommon with these systems.

Finally, integrating multiple components into one assembly is not a new concept in hydraulics, but much of this new technology presents additional benefits for doing so. Combining a variable-speed electric motor, electronic controller, and hydraulic pump provides a neat, unified package. Adding a modular hydraulic reservoir, valves, filters, electronic sensors, and other components creates an all-in-one hydraulic power unit that simplifies maintenance and diagnostics while reducing noise and maintaining high efficiency and performance.

Pneumatics is widely used because of its high speed, repeatability, and reliability. Unlike electrical drives, pneumatics can tolerate rapid duty cycles without overheating, and overloads simply cause pneumatic actuators to stall rather than burn out. Although pneumatics technology has not undergone advances as dramatic as the emergence of variable-speed electric drives, recent improvements are more closely aligned with the Internet of Things and Industry 4.0. This is due primarily to pneumatic systems being used in factory environments, where Wi-Fi and other forms of networking and wireless communication are in widespread use. 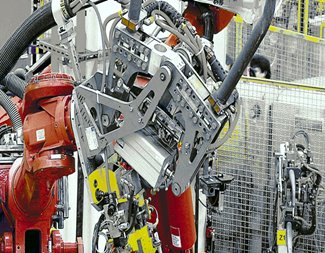 Electro-pneumatic positioning systems with electronic position and pressure feedback can apply the additional pressure required at a given position to maintain the force needed to achieve an accurate weld. Photo: Aventics
High-speed electronic communication was initially specified for statistical process control. The high speed and versatility of today’s controls allow constant monitoring of production processes and machine components for self-diagnostics. This means machine controls can detect the nature of faults and monitor trends for predictive maintenance.

Continuous monitoring and diagnosis of a pneumatic system can provide real-time notification of issues with components the instant they deviate from normal operation. Officials at Festo Corp. say incorporating this technology can return a machine to optimum performance and save downtime by as much as 35 percent. Furthermore, self-diagnostics allow scheduling repairs according to production schedules rather than equipment failure. Festo also suggests that by investing 10 percent more into diagnostic and condition monitoring features could reduce follow-up costs as much as 75 percent.

Traditional electro-pneumatic systems cannot control both position and force simultaneously. For example, maintaining a welding tip force in auto body welding applications with accurate position control is difficult to achieve with conventional pneumatics. Jonathan Revlett, Aventics product specialist at Emerson, says that by using a closed-loop feedback system, advanced electro-pneumatic positioning systems can apply the additional pressure required at a given position to maintain the force needed to achieve an accurate weld.

More for You: 6 Insurances for Safe Hydraulic Hose Assemblies

He suggests using dynamic direct-acting proportional control valves combined with precision feedback for positioning. This combination provides higher performance and repeatability while securing a position without the use of a mechanical rod lock to ensure a load does not change.

Other developments have introduced that have not had as much impact as those described here, so this report is by no means complete. Of course, manufacturers are not only refining the advancements reported here, but you can bet they are working on additional innovations behind the scenes. So, we can look forward to fluid power technology not only remaining a viable form of power transmission but with greater versatility and capabilities in the future.

Alan Hitchcox is an editor and technical writer based in suburban Dallas, Texas.